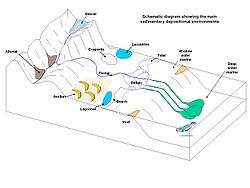 In geology, depositional environment or sedimentary environment describes the combination of physical, chemical and biological processes associated with the deposition of a particular type of sediment and, therefore, the rock types that will be formed after lithification, if the sediment is preserved in the rock record. In most cases the environments associated with particular rock types or associations of rock types can be matched to existing analogues. However, the further back in geological time sediments were deposited, the more likely that direct modern analogues are not available (e.g. banded iron formations).

Depositional environments in ancient sediments are recognised using a combination of sedimentary facies, facies associations, sedimentary structures and fossils, particularly trace fossil assemblages, as they indicate the environment in which they lived.