Sergey Vitalyevich Bezrukov PAR (Russian: Серге́й Вита́льевич Безру́ков, born 18 October 1973) is a Russian screen and stage actor, People's Artist of Russia, the laureate of the State Prize of the Russian Federation. He currently works at Tabakov Studio (the theatre of Oleg Tabakov).[1]

Sergey Bezrukov is the son of Vitali Bezrukov, who is also an actor. He graduated from Moscow Art Theatre and made his cinema debut in Nocturne for Drum and Motorcycle. Since 1994 he has played a wide range of characters, such as Ivan Brilling in Azazel, Irakliy in The Irony of Fate 2, Kappel in Admiral, Sumarokov in The Strict Routine Vacations, and Rzhevskiy in The Ballad of Uhlans.[2] His notable roles in Russian miniseries include starring as Sasha Belov in Brigada, Yeshua Ha-Nozri in The Master and Margarita, Sergei Yesenin in Yesenin and Vladimir Vysotsky in Vysotsky. Thank You For Being Alive. He voiced the title character of Prince Vladimir animated film and several characters in the Kukly series. He is also known for his theatre role of Chichikov in Dead Souls (which won the Moskovskij Komsomolets' award). In 2006, he portrayed Alexander Pushkin, revered as the Russian language's greatest poet, in Pushkin: The Last Duel. According to the survey of ROMIR Monitoring, in Russia he was called the favourite actor of 2005.[3]

He is married to a fellow actor Irina Bezrukova (née Bakhtura) since 2000. They have split in 2015.

In March 2014 he signed a letter in support of the position of the President of Russia Vladimir Putin on Russia's military intervention in Ukraine.[4] 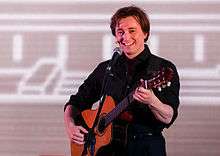