The Universal Exposition of Seville (Expo '92) took place from Monday, April 20 to Monday, October 12, 1992 on La Isla de La Cartuja (Cartuja Island), Seville, Spain. The theme for the Expo was "The Age of Discovery" and over 100 countries were represented. The total amount of land used for the Expo was 215 hectares and the total number of visitors was 41,814,571 (as per the BIE website ). Although not related, the exposition ran at the same time as the smaller Genoa Expo '92.

Expo'92 was organized to celebrate the 500th anniversary of the discovery of the Americas by Christopher Columbus (1492-1992). The exposition was to be jointly held with the City of Chicago, however, due to national, state, and local funding difficulties, Chicago did not accept the offer.

Expo'92 Seville was widely known for its massive site, held at the Isla de la Cartuja, reputed site of reference for Columbus for his voyage to the New World, and required at least several days to visit most of the Pavilions. It was also known for its numerous spectacular gates and bridges, and the diversity of transport within the Expo site from bus to ferry boat, to cable car and monorail. It also gave an impressive architectural tour of the world, with many countries vying for the position of the most inventive or creative Pavilion structure - outstanding amongst these was the Pavilion of Japan - the world's largest wooden structure, the Pavilion of Morocco, a re-creation of a Moroccan Palace-Mansion, and the modernistic cube and sphere of the flagship Spanish Pavilion, to name a few. The most popular pavilions with visitors were those of Spain and Canada.

In particular the Discoveries Pavilion featured an Omnimax Theatre, where a Spanish government commissioned theme film, Eureka!, made by Greg MacGillivray and Jon Boorstin, based on The Discoverers, by Daniel J. Boorstin was presented. The first IMAX film to use a light-weight hand held camera (with a steadicam), it won the principal creative award at the fair.

To offset costs by developing nations, and to allow a 'first-ever' representation by every South American nation, a special monumental structure, the 'Plaza de Americas' was constructed, a large enclosed Plaza-type building in a rustic red colour which also hosted a special Exhibition on the Gold of South America. A 'Plaza de Africa' was also created to allow maximum participation from developing African states.

Curro was the mascot for the fair. It has the shape of a big white bird with the legs of an elephant, whose long conical beak and crest had the colours of the rainbow.

It was created by German designer Heinz Edelmann (who is best known for his work on the 1968 animated film, Yellow Submarine), who also gave it the name Curro, an Andalusian pet form of Spanish male name Francisco.

It was presented officially in the Plaza de España of Seville, in a big fest of light and sound on the 20 April 1990, two years before the Fair's inauguration.

The hot Sevillian summer was largely abated by a microfilter water air conditioning system throughout the site, principally along the main avenues and streets, under canopied sections both of tensile fabric and greenery. Visitors were sprayed with cool mist in various locations, and could make use of the numerous fountains and wading pools to cool off.

At the conclusion of the Expo, many of the Pavilions were dismantled, and today the site is divided between a research and development park called Cartuja 93 and a theme park called Isla Mágica, the 'Magic Island', which also hosts the popular Pavilion of Spain. The Government of Canada donated the Canadian Pavilion for use as a new trade school.

One can walk throughout Cartuja 93 for free, however, admission to the Isla Mágica requires an entrance fee. 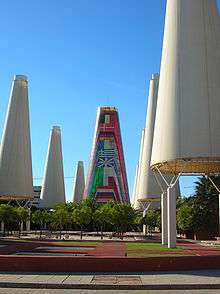 Over one hundred nations were represented at the Expo, making it one of the largest ever hosted.