Shek Kip Mei Sports Association (Chinese: 石硤尾體育會) is a Hong Kong football club, played in Hong Kong First Division League. It is known as Workable FC (Chinese: 華家堡足球會) which is under the football division of the Hong Kong Football Association in 2007–2008 season.

The team got the 1st Runner-up in Hong Kong Third A Division League in 2005–06 season and qualified into Third Division League Final Round to fight for 2 promotion positions among 4 teams. Shek Kip Mei topped the table and was promoted to Second Division. 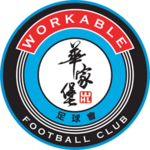 The team obtained an HK$4,000,000 naming sponsorship from Workable Corporation and was named as Workable Football Club to compete in First Division League. The team released all the promotion heroes in Shek Kip Mei and obtained a few players from the extinct Hong Kong 08 as the stem of team construction.

They played its debut match in First Division League on 8 September 2007, drawing 2–2 with Wofoo Tai Po in Mong Kok Stadium. The match is also highlighted by that current Workable manager Chan Hiu Ming is the head coach of Wofoo Tai Po in the previous season.