Not to be confused with Shinty or Shinney.
For other uses, see Shinny (disambiguation). 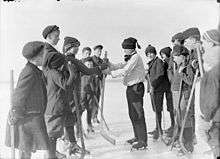 A group of boys picking teams for a game of shinny, Sarnia, Ontario, 1908

Shinny (also shinney, pick-up hockey, pond hockey, or "outdoor puck") is an informal type of hockey played on ice. It is also used as another term for street hockey. There are no formal rules or specific positions, and generally, there are no goaltenders. The goal areas at each end may be marked by nets, or simply by objects, such as stones or blocks of snow. Body checking and lifting or "roofing/reefing/raising the puck" (shooting the puck or ball so it rises above the ice) are often forbidden because the players are not wearing protective equipment. Shinny is a game that all levels of hockey enthusiasts can play because it requires no rink, requires no skills except ability to hold a stick and at the very least to try to touch the puck or ball when it goes by. Shinny may be completely non-competitive and recreational - scoring irrelevant - or competitive and scores kept.

In his book Country on Ice, Doug Beardsley claims that most Canadian hockey professional players have played some form of shinny in their youth.[1]

There is a common ritual for choosing teams, which has each player "throwing" their hockey stick into a pile at centre ice, or the middle area between two nets. If there are not enough people on the rink who are not playing an organized game, one player may approach another player and ask, "Wanna get a game goin', bud?", or simply toss his own stick into the middle. Once people follow suit and enough sticks are in the pile, someone divides the pile into two smaller piles, perhaps strategically assigning sticks to one side or another. Players then pick up their own sticks, the teams having been formed. If there are too many players for the size of playing area, three teams may be created, with one team waiting to play the winner. Otherwise, the two teams can put the extra players on the "bench," allowing for players to rest between shifts.

Very often teams are formed with intent to divide the group into approximately equal levels of skills among the players. Players joining after play has started are usually told "which way they are going" (which net they should shoot towards) based upon the score of the game and their skill level. Some games continue for many hours with a variety of players participating for as long as they want.

Shinny, generally believed to be a precursor to ice hockey, was informal enough in its formative years that the pucks and sticks were often makeshift. During the Great Depression, for example, northern boys used tree branches or broomhandles as sticks, a tin can, a piece of wood, and even a frozen road apple (horse dropping) as a puck. Any object about the right size might serve as a puck.

The name is derived from the Scottish game shinty and indeed shinny was a common name for one of shinty's many regional variations in Scotland. Shinny, a primarily Canadian term,[2] is usually called scrimmage, pick-up hockey, drop-in hockey, stick and puck (SAP), or RAT Hockey in the United States.

In some municipalities around the world where the climate permits, part of a city's taxes may go to the formal set-up and maintenance of skating rinks designed specifically for shinny. In some cities, such as Montreal; Quebec; and Edmonton, Alberta, Canada, numerous rinks are erected and are maintained by civil servants throughout the winter as long as the weather allows their usage to continue.

The City of Toronto, Ontario, Canada, known for both its hockey fan reputation and fresh waves of new immigrants, hosts free or low-cost shinny sessions and also has programs for adults to learn how to shinny on city rinks. The programs, expanded in 2011, include parent/child shinny and two levels of beginner, and are supervised by city-paid coaches.

This article is issued from Wikipedia - version of the 2/8/2016. The text is available under the Creative Commons Attribution/Share Alike but additional terms may apply for the media files.