This article is about the siege that occurred in 589–587 BC. It is not to be confused with the first siege of Jerusalem by Nebuchadnezzar (597 BC).

In 589 BC, Nebuchadnezzar II laid siege to Jerusalem, culminating in the destruction of the city and its temple in the summer of 587 BC.

Following the siege of 597 BC, the Neo-Babylonian king Nebuchadnezzar installed Zedekiah as tributary king of Judah, at the age of 21. However, Zedekiah revolted against Babylon, and entered into an alliance with Pharaoh Hophra, the king of Egypt. Nebuchadnezzar responded by invading Judah[1] and began a siege of Jerusalem in December 589 BC. During this siege, the duration of which was either 18 or 30 months,[2] "every worst woe befell the city, which drank the cup of God's fury to the dregs".[3] In 586 BC, after completion of the eleventh year of Zedekiah's reign,[4] Nebuchadnezzar broke through Jerusalem's walls, conquering the city. Zedekiah and his followers attempted to escape but were captured on the plains of Jericho and taken to Riblah. There, after seeing his sons killed, Zedekiah was blinded, bound, and taken captive to Babylon,[5] where he remained a prisoner until his death.

After the fall of Jerusalem, The Babylonian general, Nebuzaraddan, was sent to complete its destruction. Jerusalem was plundered, and Solomon's Temple was destroyed. Most of the elite were taken into captivity in Babylon. The city was razed to the ground. Only a few people were permitted to remain to tend to the land.[6]

Gedaliah was made governor of the remnant of Judah, the Yehud Province, with a Chaldean guard stationed at Mizpah.[7] On hearing this news, the Jews who were in Moab, Ammon, Edom, and in other countries returned to Judah.[8] Gedaliah was assassinated two months later, and the population that had remained and those who had returned then fled to Egypt for safety.[9] In Egypt, they settled in Migdol, Tahpanhes, Noph, and Pathros.[10] 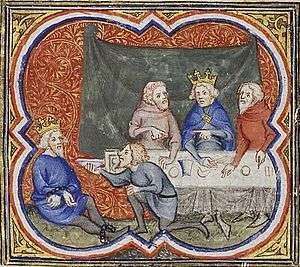 The Babylonian Chronicles, published in 1956, indicate that Nebuchadnezzar captured Jerusalem the first time putting an end to the reign of Jehoaichin, on 2 Adar (16 March) 597 BC.[11]

There has been some debate as to when the second siege of Jerusalem took place. There is no dispute that Jerusalem fell the second time in the summer month of Tammuz (Jeremiah 52:6), but William F. Albright dates the end of Zedekiah's reign and the fall of Jerusalem to 587 BC, but Edwin R. Thiele offers 586 BC.[12]

Thiele's reckoning is based on the presentation of Zedekiah's reign on an accession basis, which was occasionally used for the kings of Judah. In that case, the year that Zedekiah came to the throne would be his zeroth year; his first full year would be 597/596 BC, and his eleventh year, the year that Jerusalem fell, would be 587/586 BC. Since Judah's regnal years were counted from Tishri in autumn, that would place the end of his reign and the capture of Jerusalem in the summer of 586 BC.[12][13]

However, the Babylonian Chronicles support the enumeration of Zedekiah's reign on a non-accession basis. Zedekiah's first year, when he was installed by Nebuchadnezzar, was, therefore, in 598/597 BC according to Judah's Tishri-based calendar. The fall of Jerusalem, in his eleventh year, would then have been in the summer of 587 BC. The Babylonian Chronicles allow the fairly precise dating of the capture of Jehoiachin and the start of Zedekiah's reign, and it also provide the accession year of Nebuchadnezzar's successor Amel-Marduk (Evil Merodach) as 562/561 BC, the 37th year of Jehoiachin's captivity according to 2 Kings 25:27. The Babylonian records, related to Jehoiachin's reign, are consistent with the fall of the city in 587 BC and so are inconsistent with a 586 date.

Timeline of events in final siege

A timeline for the final siege of Jerusalem is shown in the table below. Dates are taken from the 2011 From Abraham to Paul: A Biblical Chronology, a book by Andrew E. Steinnman.[14]