Map of the Harmandar Sahib Complex, Click to enlarge

Sikh Architecture, is a style of architecture that is characterized with values of progressiveness, exquisite intricacy, austere beauty and logical flowing lines. Due to its progressive style, it is constantly evolving into many newly developing branches with new contemporary styles. Although Sikh architecture was initially developed within Sikhism its style has been used in many non-religious buildings due to its beauty. 300 years ago, Sikh architecture was distinguished for its many curves and straight lines; Shri Keshgarh Sahib and the Sri Harmandir Sahib (Golden Temple) are prime examples.

Further examples of Sikh architecture can be found in the countries of India, Pakistan, Afghanistan, Bangladesh, Saudi Arabia, Iraq and Turkey- these examples are mostly memorials of the places the Sikh gurus visited. Modern examples can be found worldwide; in the Americas, Oceania Europe and Asia.

The Harmandir Sahib in Amritsar, India. 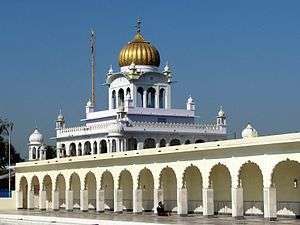