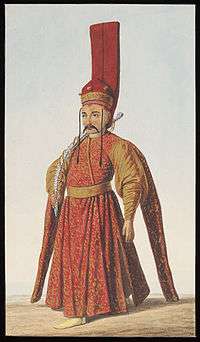 Depiction of the Silahdar Agha, ca. 1809

The Silahdar Agha was a palace office of the Ottoman Empire, denoting the principal page of the Ottoman Sultan. As such its holders were persons of great influence, and provided many senior officials and even Grand Viziers.

The title derives from the Persian silahdar, meaning "arms-bearer", a title originally adopted by the Great Seljuks to denote one of the Sultan's principal aides, who bore his weapon and was responsible for the army's arsenal.[1] The Ottomans inherited this title and elevated it further: by the time of Mehmed II (r. 1451–81) the Silahdar Agha was the second-in-command of the Sultan's Privy Chamber (Hass Oda) underneath the hass oda bashi. The Privy Chamber in turn was the senior of the four chambers making up the palace's Inner Service (Enderûn) under the Kapi Agha.[2]

Due to their proximity to the Sultan, the holders of the post were highly influential, and many occupants moved on to senior positions in the Ottoman government, including the supreme post of Grand Vizier.[2] The post rose to such importance that in 1704 its holders assumed the last remaining powers of the once powerful Kapi Agha.[3] The last holder of the office was Giritli Ali Pasha, who died in 1831. Sultan Mahmud II thereupon abolished the post, merging it with the steward of the treasury (khazine kethüdası).[2]