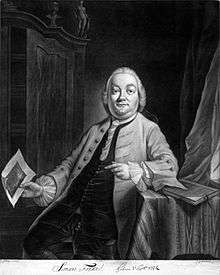 Simon Fokke holding one of his engravings, (by John Greenwood after a portrait by Jacobus Buys) 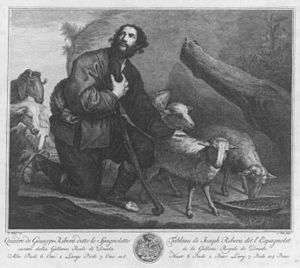 Jacob keeping the Flocks of Laban; after Jusepe de Ribera, now in the Gemäldegalerie Alte Meister in Dresden, copper engraving from ca. 1750

Simon Fokke (1712–1784), a Dutch designer, etcher, and engraver, was born at Amsterdam. He was a pupil of J. C. Philips, and was chiefly employed for the booksellers on small portraits and vignettes, which he executed with spirit, but for the most part superficially. The same must be said of the numerous drawings which he has left. He died at Amsterdam in 1784. There are by him, among others, the following plates:

This article incorporates text from the article "FOKKE, Simon" in Bryan's Dictionary of Painters and Engravers by Michael Bryan, edited by Robert Edmund Graves and Sir Walter Armstrong, an 1886–1889 publication now in the public domain.