Sirimavo Bandaranaike Vidyalaya[1] is one of the leading Public Girls school[2] in Colombo, Sri Lanka. It is a National public school controlled by the central government[3][4][5] providing primary and secondary education.[6]

The school inaugurated on 1 January 1973 as Stanmore Crescent Primary School and renamed in December 1973 as Sirimavo Bandaranaike Primary Girls School in honor of then Prime Minister Madam Sirimavo R.D. Bandaranaike.[7] From a Primary School, the school developed into a secondary school and finally to a leading national school within seventeen years of period.

At present the school has over 3000 pupils and a staff of about 180. Around 45 members of the non-academic staff provide other services.

After eleven months of deliberation, the then Deputy Minister of Education Mr. B.Y.Tudawesuggested to change the name of the school in honor of late Madame Sirimavo Bandaranaike who was the first lady Prime Minister of the world.[9]

After the initial batch of students finished five years of Primary Education, classes had to be extended to provide Secondary Education and in due course classes up to Year 13 were established. Due to the patronage of former principals Miss. Wimala Liyanage (1973–1982), and Mrs. R.M.L. Jayasekera (1982–2000) the status of the school was raised to level of a National School in 1991. Under the guidance of Miss W.P.N. De Silva (2000–2003) the school’s academic and co-curricular activities were further developed.

Mrs. P.M. Kalubowila assumed duties as the principal from 6 November 2003 having joined Sirimavo Bandaranaike Vidyalaya in 1986 as a Chemistry teacher. Ever since up to date Mrs. Kalubowila also has been dedicated herself to serve the school in the sphere of educational and co-curricular activities and to upgrade the infra-structure facilities and resources development of the school.[10]

However, in July 2009 Mrs. Kalubowila ordered all students to shut down their Facebook profiles, with a threat of expulsion from school for disobedience. This sparked a controversy in the school system in Sri Lanka. After the retirement of Mrs. P.M. Kalubowila in the month of February, 2012, the newly appointed principal Mrs. Dhammika C. Jayaneththi has taken over. Mrs. Malini Herath was appointed as principal in 2013 and she is class 1 in Sri Lanka Education Administrative Service. 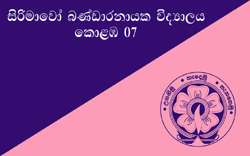 More than 30 clubs and societies are available. Every club and society has a member of the teaching staff overseeing things and helping with administration and organising events.

The school library was set up in 1982 with the assistance of the Sri Lanka Library Services Board .In 1996 a program titled "Library Week" was inaugurated during the "Reading Month". Library facilities are provided to all the pupils of the school and there are two libraries separately; one for Primary Grades and other for seniors. A reference section and a lending library section function and about 250 students are benefit daily from the lending library section. Books are issued on a daily basis to advanced level students and on the recommendation of teachers in charge books are provided to pupils taking part in "Do You Know "contests and debating teams. The strength of the library is about 15000 books. Magazine section has been organized to improve the General Knowledge of the students.

Construction of a new state of the art library complex is in progress.

A swimming pool was a long felt need[19] of the Sirimavians. Many problems arose in attending training sessions in other pools specially transport problems and supervision. As such a strong request was made by the students to commence work on a school swimming pool. As a result, the foundation for the school swimming pool was laid in October 2006. Many projects were launched to raise funds for the project.[20] Swimming pool project was completed in 2 years time and that was considered as an achievement. Swimming Pool caters to the long felt need of the Sirimavians and foster the advancements in the sphere of sports.

Swimming pool facilities are open to all present and past Sirimavians, Teachers and also to the community.