Istanbul Sirkeci Terminal, also known as Istanbul Terminal (Turkish: İstanbul Garı), is a railway terminal in Istanbul. The Terminal is located on the tip of Istanbul's historic peninsula right next to the Golden Horn and just northwest of Gülhane Park and the famous Topkapı Palace. Sirkeci Terminal, along with Haydarpaşa Terminal on the other side of the Bosphorus, are Istanbul's two intercity and commuter railway terminals. Built in 1890 by the Oriental Railway as the eastern terminus of the world-famous Orient Express, Sirkeci Terminal has become a symbol of the city. As of 19 March 2013 service to the station had been indefinitely suspended due to the rehabilitation of the existing line between Kazlıçeşme and Halkalı for the new Marmaray commuter rail line. On 29 October 2013, a new underground station opened to the public and is currently serviced by Marmaray trains travelling across the Bosphorus. Sirkeci Terminal has a total of 4 platforms (3 above, 1 underground) with 7 tracks (5 above, 2 underground). Formerly, commuter trains to Halkalı would depart from tracks 2, 3 and 4 while Regional trains to Kapıkule, Edirne and Uzunköprü along with International trains to Bucharest, Sofiya and Belgrade would depart from tracks 1 and 5.

After the Crimean War, the Ottoman authorities concluded that a railway connecting Europe with Istanbul was necessary. The first contract was signed with Labro, a British member of parliament, in January 1857. The contract was cancelled three months later because Labro was unable to provide the investment capital required. Similar second and third contracts signed with British and Belgian entrepreneurs in 1860 and 1868 ended with the same result. On 17 April 1869 the concession for the "Rumeli Railroad" was awarded to Baron Maurice de Hirsch (Moritz Freiherr Hirsch auf Gereuth), a Bavaria-born banker from Belgium. The project foresaw a route from Istanbul via Edirne, Plovdiv and Sarajevo to the shore of the Sava River. The construction of the first 15 kilometres (9.3 mi) from Istanbul to Halkalı began on 4 June 1870 and was completed on 4 January 1871. An extension of the line to Sirkeci was demanded as the starting point since Yeşilköy was too far away from Eminönü, the main business district of that epoch. The first proposed option for the line was a route from Beyazit down to the shore of the Golden Horn. The Ottoman Sultan Abdülaziz decided and permitted the route to run on the shoreline of the Sea of Marmara bordering the walls of Topkapı Palace’s lower garden. The extension line was completed on 21 July 1872. In 1873, a "temporary" terminus station in Sirkeci was built. 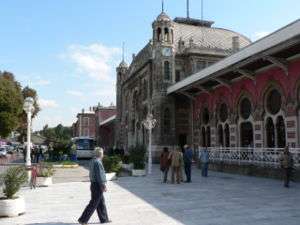 A lateral view of the Sirkeci terminal. 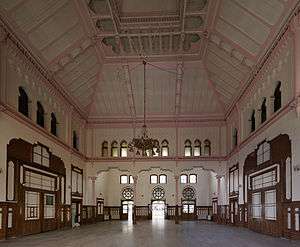 An interior view of the Sirkeci terminal.

Railroad tracks of the Sirkeci terminal.

The construction of a new terminal building began on 11 February 1888.[1] The terminus, which was initially named "Müşir Ahmet Paşa Station", was opened on 3 November 1890, replacing the temporary one. The architect of the project was August Jasmund,[2] a Prussian who was sent to Istanbul by the German government in order to study Ottoman architecture, but lectured architectural design at the School of Polytechnics in Istanbul (now Istanbul Technical University). The terminal building which rises on an area of 1,200 m2 (13,000 sq ft) is one of the most famous examples of European Orientalism, and has influenced the designs of other architects. The building was also modern, having gas lighting and heating provided by large tile stoves made in Austria[3] in winter.

The terminal restaurant became a meeting point for journalists, writers and other prominent people from the media in the 1950s and 1960s. The same restaurant, today called "Orient Express", is a popular spot among tourists.

The current station is preserved in its original state, but the areas around the terminal building have largely changed since 1890. The Istanbul Railway Museum which opened in September 2005 is located in the station.[4]

Members of the Mevlevi Dervish order regularly conduct ceremonies at Sirkeci Terminal, which tourists and other members of the public can observe for an admission fee.

The terminal constitutes the main connection node of the Turkish railway network with the rest of Europe. The two main lines of connection are provided by the line running between Istanbul and Thessaloniki, Greece, and the Bosphorus Express serving daily between Sirkeci and Gara de Nord in Bucharest, Romania. Connections to Sofia and Belgrade are established with wagons attached to the Bosphorus Express train.

On 4 October 1883 the first voyage of the Orient Express departed from Gare de l'Est in Paris, France, with farewell music from Mozart’s Turkish March. The train was a project of Belgian businessman Georges Nagelmackers. The route passed through Strasbourg, Karlsruhe, Stuttgart, Ulm, and Munich in Germany, Vienna in Austria, Budapest in Hungary, Bucharest in Romania, Rousse and Varna in Bulgaria ending in Sirkeci. The travel took 80 hours for the 3,094 kilometers.

The direct Orient Express stopped running on 19 May 1977, and the Orient Express via Vienna was cut back and terminated at Budapest and later only to Vienna. With the opening in 2007 of a new high-speed line from Paris to Strasbourg, the Orient Express was cut again to run from Strasbourg to Vienna, before finally being withdrawn in 2009 after over 130 years.[5]

This is not to be confused with the Venice Simplon Orient Express, a luxury tourist train utilising restored coaches used during the 1930s. The VSOE still makes one journey per year to Istanbul, but mostly travels between Calais and Venice.[6]

Since May 2013 there are currently no international trains from Sirkeci terminal. For trains to Bulgaria only there is a replacement bus service to Çerkezköy from where train connection is possible.[7]

Sirkeci is an underground railway station along the trans-Bosphorus Marmaray tunnel. This underground station was opened on 29 October 2013 along with four other stations (Kazlıçeşme, Yenikapı, Üsküdar and Ayrılık Çeşmesi) on the Marmaray line. Sirkeci is serviced by TCDD trains running between Kazlıçeşme (west of Sirkeci) and Ayrılık Çeşmesi (east of Sirkeci on the Asian side) with 6- to 10-minute intervals. Once the rehabilitation of the existing rail lines are complete, Marmaray commuter service will run west to Halkalı and east to Gebze. This service is expected to commence in 2016.

Construction of the Marmaray tunnel started in 2004 and was expected to open in April 2009. However, due to several important archaeological discoveries at Yenikapı, the opening was delayed until October 2014.[8][9]

Sirkeci saw 7.9 million boardings in 2014, making it the fourth busiest station. Sirkeci made up 14.65% of all passenger boardings on the line.