The Society's vision is for actuaries to be recognized as the leading professionals in the modeling and management of financial risk and contingent events. The SOA has three overall goals: providing primary and continuing education for students and practicing actuaries, maintaining high professional standards for actuaries, and conducting research on actuarial trends and public policy issues.[5]

The SOA, along with its public relations firm GolinHarris, won the PR Week Corporate Branding Campaign of the Year award for 2008. The award was given for the Society's efforts to revitalize the actuarial profession's brand in the US, including the slogan "Risk is Opportunity."[7]

The Society was founded as a merger of two major American actuarial associations, as reflected in its logo: the Actuarial Society of America (ASA) and the American Institute of Actuaries (AIA). 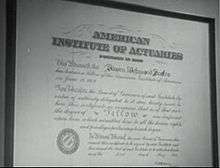 Shot of an old diploma issued by the AIA.

The Actuarial Society of America was the first actuarial professional association in North America, founded in 1889 with only 38 members and headquartered in New York City.[8] Initial members were included by invitation, but the organization soon adopted a system of examination for qualification, with the first Fellow to qualify via exams joining in 1900.

The American Institute of Actuaries was founded in 1909. Based in Chicago, it attracted members from life insurance companies in the midwestern and southern United States. The formation of the AIA, which (like the ASA) was geared toward actuaries in the field of life insurance, was followed within the decade by the creation of two other specialized actuarial organizations: the Casualty Actuarial Society, which still exists today, and the Fraternal Actuarial Association which dissolved in 1980.

The SOA is headed by a board of directors consisting of a president, president-elect, six vice presidents (one of which serves as the secretary/treasurer) and eighteen other board members.[9] In addition, the two most recent past presidents are members of the board.

The board positions are filled by election. A member of the society is eligible to vote in board elections if they have the title of FSA, or if they have held the title of ASA for at least 5 years, and only FSAs can be elected to the board. (See the Membership section below for information on the professional titles granted by the society.) Regular board members are elected for terms of three years, and vice presidents are elected for terms of two years. The president-elect is elected for a term of one year, after which he or she becomes the president for a term of one year.

The employees of the SOA are headed by the executive director, a salaried position appointed by the board of directors.

In Section elections, generally one third of the Council is elected each year as members serve three–year terms. Section Councils select their officers (Chair, Vice Chair, and Secretary/Treasurer).

According to the SOA Bylaws, Fellows and Associates who have been members of the Society for 5 years or more are entitled to vote in the Board of Directors' election. According to the Section Bylaws, all members of a Section are entitled to vote in the Section Council election. This includes ASAs, FSAs, and members of co–sponsoring organizations who are also members of a Section. SOA members with valid e–mail addresses in the SOA database are sent login credentials to vote online. Members without valid email addresses, or who notify the SOA of their request, receive paper ballots.

The Society's members are mainly involved in the life, health, and pension areas of the actuarial profession. There are three designations offered by the Society. The two Associate-level designations are Associate of Society of Actuaries (ASA) and Chartered Enterprise Risk Analyst (CERA), which was introduced in 2007. The highest designation is Fellow of the Society of Actuaries (FSA). As of December 31, 2014, SOA membership consisted of 9,849 Associates and 15,729 Fellows.[2]

Requirements for membership for the SOA include the actuarial exams, a comprehensive series of competitive exams. Topics covered in the exams include mathematics, finance, insurance, economics, interest theory, life models, and actuarial science. Non-members working in the actuarial profession and taking exams are often referred to as actuarial students or candidates.

Members of the SOA who meet a professional experience requirement are eligible for membership in the American Academy of Actuaries, which represents United States actuaries from all practice areas.[10]

Professional designations in the Society are earned by completing a rigorous system of examinations. It is common for actuarial students to work full-time in the profession while studying for the exams.

A series of online learning modules, called the Fundamentals of Actuarial Practice (FAP), are intended to be taken after the preliminary exams. They cover real-world topics such as insurance and professionalism with readings, case studies and projects.[12] The preliminary exams and FAP modules comprise the majority of the education requirement for the ASA designation.