Society of Antiquaries of Scotland 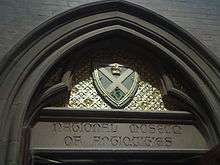 The coat of arms of the Society of Antiquaries of Scotland, above the entrance to the former National Museum of Antiquities, at the Scottish National Portrait Gallery.

The Society of Antiquaries of Scotland is the senior antiquarian body of Scotland, with its headquarters in the National Museum of Scotland, Chambers Street, Edinburgh. The Society's aim is to promote the cultural heritage of Scotland. 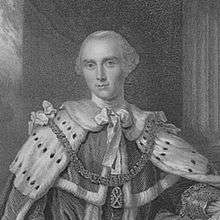 John Stuart, 3rd Earl of Bute, the former prime minister, was elected the first President of the Society in 1780.

The Society was established in 1780, and is the oldest antiquarian society in Scotland, and the second-oldest in Britain after the Society of Antiquaries of London. Founded by David Steuart Erskine, 11th Earl of Buchan on 18 December 1780, John Stuart, 3rd Earl of Bute, the former prime minister, was elected the first President. It was incorporated by Royal Charter in 1783, on the same day as the Royal Society of Edinburgh, and initially both societies shared accommodation on George Street and in the Royal Institution building on The Mound. In 1891 the antiquaries moved into the purpose-built Scottish National Portrait Gallery and National Museum of Antiquities of Scotland, located on Queen Street.[1] The society moved to the National Museum of Scotland in 1954.

Alexander Rhind left a bequest to the Society to fund a lecture series, the Rhind Lectures are still hosted by the Society; an online recording of these prestigious lectures has been made available to the public since 2009.[2]

The Society of Antiquaries of Scotland is a charitable organisation whose purpose is set out in its Royal Charter from 1783:

"…a Society to investigate both antiquities and natural and civil history in general, with the intention that the talents of mankind should be cultivated and that the study of natural and useful sciences should be promoted.”

The first Law of the Society focuses this further:

"The purpose of the Society shall be the study of the Antiquities and History of Scotland, more especially by means of Archaeological Research."[3]

The Society today is concerned with every aspect of the human past in Scotland. It draws on a wide range of experience through the Fellowship, and provides a voice for Scotland's heritage independent of the opinions of Government, University, or Agency. The Society is consulted by a wide range of organisations from central government to academic funding bodies such as the Arts & Humanities Research Council. The Society makes written responses to numerous consultations, some jointly with Archaeology Scotland (formerly CSA) and the Scottish Group of the Chartered Institute for Archaeologists. The Society worked closely with the Historic Environment Advisory Council for Scotland (HEACS was abolished by the Public Services Reform (Scotland) Act 2010 as part of the Scottish Government's policy to simplify the landscape of public bodies), and gave evidence to their working groups on heritage protection legislation and properties in care. The Society has also been actively involved in the Built Environment Forum Scotland, an umbrella body for NGOs in the built and historic environment sectors.

Fellowship is regarded as a sign of recognition as supporting and contributing to the purpose and mission of the society, and Fellows are permitted to use the post-nominals FSA Scot (NB Not FSA (Scot) or similar). The Society has an international membership of around 3000 Fellows and a maximum of 25 Honorary Fellows. Admission to the Society is by election, and candidates must be supported by existing Fellows. The names of those seeking admission are then circulated to the whole Fellowship. Elections are held annually at the Anniversary Meeting (AGM) on St Andrews Day, 30 November. Fundamental to being a candidate for election to the Fellowship is an interest or involvement in Scotland's past. Candidates are advised of the outcome of the election shortly after the ballot.

A major part of the Society's programme is support for research into Scotland's past, and there are various grants and awards to assist different kinds of work, from survey and excavation to finds analysis and archival research.

Other prizes and awards

The Society also encourages best practice and continued research into Scotland's past through various prizes and awards.

The Society hosts monthly lectures, usually between October and May, and generally held in both Edinburgh and Aberdeen, although some are jointly hosted with other Societies elsewhere in Scotland. The Society can also fund other Society's to invite a lecturer to them; this lecture is called the Buchan Lecture.

In addition, the Society hosts the prestigious Rhind Lectures, a series of six lectures, often presented by a single lecturer over a weekend. These allow the lecturer to present their topic in much greater detail and depth than otherwise possible, and are often published. The Rhind lectures began in 1874 after the death of Alexander Rhind who left the residue of his estate to endow a lectureship in the Society and there have now been over 130 lectures and many have become the published textbook for a generation. 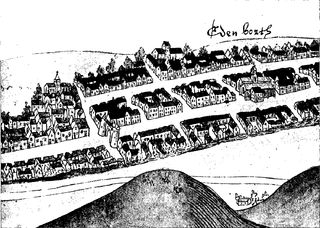 Sketch of Edinburgh made in 1544, showing the Netherbow Port between the High Street and the Canongate; published in the Proceedings of the Society of Antiquaries of Scotland in 1933.

The Society of Antiquaries of Scotland has three main publishing branches:

There is also a regular Society Newsletter (ISSN 0960-703X), and the Society publishes book reviews on their website.

List of Presidents of the Society of Antiquaries of Scotland