For the area in the northern part of Oslo, a residential area for students, see Sogn Studentby.

Sogn is a traditional district in Western Norway (Vestlandet). It is located in the county of Sogn og Fjordane, surrounding the Sognefjorden, the largest/longest fjord in Norway. The district of Sogn consists of the municipalities of Aurland, Balestrand, Hyllestad, Høyanger, Gulen, Leikanger, Luster, Lærdal, Sogndal, Solund, Vik, and Årdal. The district covers 10,675 square kilometres (4,122 sq mi) and contains about 35% of the county's population. The largest urban area in Sogn is the village of Sogndalsfjøra (in Sogndal municipality), with 3,455 residents. The second largest urban area is the village Øvre Årdal (in Årdal municipality), with 3,397 people (this village used to be the largest, but recently it was passed by Sogndalsfjøra).[2][3]

The district of Sogn comprises the southern part of the county Sogn og Fjordane. The districts of Sunnfjord and Nordfjord are the other two districts in the county. 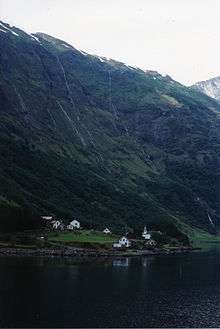 The name Sogn is very old, and it originally belonged to the fjord (now called the Sognefjorden). The name is derived from the verb súga which means "suck"—referring to the strong tidal streams at the mouth of the fjord. A parallel name for the district in Norse times was Sygnafylki. The first element in this name is the genitive of sygnir which means "people from Sogn" and the last element is fylki which is an old form of "fylke" which translates as "county".[1][4]

Since early in the Viking Age, Sogn was a petty kingdom called Sygnafylki. Some notable Kings of Sogn were Harald Gullskjegg ("Goldbeard", father of Ragnhild, first wife of Halfdan the Black), Halfdan the Black, and Harald Fairhair.

This article is issued from Wikipedia - version of the 5/16/2016. The text is available under the Creative Commons Attribution/Share Alike but additional terms may apply for the media files.