The Southwest Conference (SWC) was an NCAA Division I college athletic conference in the United States that existed from 1914 to 1996. Composed primarily of schools from Texas, at various times the conference included schools from Oklahoma and Arkansas as well.

For most of its history, the core members of the conference were Texas-based schools plus one in Arkansas, Rice University, Southern Methodist University, Texas A&M University, Texas Christian University, the University of Arkansas, and the University of Texas. After a long period of stability, Arkansas left in 1991 to join the Southeastern Conference. Five years later, the conference precipitously broke up as Baylor, Texas, Texas A&M, and Texas Tech (which had entered in 1956) combined with the members of the former Big Eight Conference to form a new powerhouse, the Big 12 Conference, while Rice, SMU, TCU, and Houston found homes in less prominent conferences.

L. Theo Bellmont, the University of Texas athletic director sent out questionnaires to schools in Texas and neighboring states to gauge their interest as to if they would be willing to be part of and organize an athletic conference. By March 1, 1914 a number of schools had responded favorably to the idea.[2]

The first organizational meeting of the conference was set to be held on April 30, 1914. The date was changed because representatives from every school could not make it then. It was ultimately held on May 5 and 7, 1914 at the Oriental Hotel in Dallas, Texas.[3] It was chaired by L. Theo Bellmont. Originally, Bellmont wanted Louisiana State University and the University of Mississippi to join the conference as well, but they declined to do so. The Southwest Intercollegiate Athletic Conference became an official body on December 8, 1914, at a formal meeting at the Rice Hotel in Houston.

Phillips University was a conference member for one year (1920). Oklahoma left in 1919 to join the Missouri Valley Intercollegiate Athletic Association (later known as the Big Eight Conference), and was followed by Oklahoma A&M in 1925. However, the series between Texas and Oklahoma would continue as a non-conference matchup in the annual Red River Rivalry game held in Dallas. From 1925 until 1991, the University of Arkansas would be the only conference member not located within the state of Texas.

By 1925, the conference's name was shortened to simply Southwest Conference.[1] After its organizational years, the conference settled into regularly scheduled meetings among its members, and began to gain stature nationwide. The SWC would be guided by seven commissioners, the first of whom, P. W. St. Clair, was appointed in 1938. In 1940, the conference took control of the then five-year-old Cotton Bowl Classic, which further established the prestige of both the bowl and the conference. Texas Technological College (now Texas Tech University) joined the SWC in 1958, followed by the University of Houston for the 1976 season (Houston won the SWC football championship in its first season in the league). 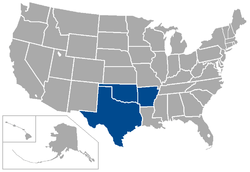 The conference celebrated its glory football years in the 1960s, dominated by two teams, Texas and Arkansas. Texas won the 1963 National Championship, and Arkansas won a National Championship in 1964 in the Football Writers Association of America (FWAA) and Helms Athletic Foundation (HAF) polls. In 1969, Texas won another National Championship by beating #2-ranked Arkansas 15-14 in the regular season's final game (dubbed the "Big Shootout"). The 1969 Arkansas-Texas game in Fayetteville, Arkansas, attended by President Richard Nixon, is usually counted among the greatest college football games ever played. Texas also won the 1970 United Press International (UPI) National Championship (i.e., the coaches' poll), which until 1974 was awarded prior to the bowl games. Texas lost the Cotton Bowl Classic following the 1970 season to Notre Dame by a score of 24-11, giving the Associated Press (AP) Championship to Nebraska after they beat LSU by a score of 17-12 in the Orange Bowl.

The early 1980s were the glory years of SWC basketball, including the Phi Slama Jama teams at the University of Houston. However, the most consistent program during the last quarter of the 20th century was the University of Arkansas with Sweet 16 appearances in 1978, 1979, 1981, 1983, 1990, 1991, Elite 8 appearances in 1978, 1979, 1990 and 1991 and Final Four appearances in 1978 and 1990. Arkansas's famed Triplets, Marvin Delph, Ron Brewer and Sidney Moncrief, gave the rest of the league fits. Furthermore, the Razorbacks' Lee Mayberry, Todd Day and Oliver Miller won three straight SWC regular season and tournament titles from 1989–1991, the school's last three seasons in the conference. The passion of Arkansas fans for their Razorbacks often overran the confines of SWC basketball venues, so much so, that Reunion Arena in Dallas (annual site of the SWC postseason tournament) was deemed "Barnhill South" (after the Razorbacks' on-campus arena) based on the numbers and intensity of Hog fans present.

The Texas Longhorns baseball program under coach Cliff Gustafson won national titles in 1975 and 1983, as well as titles under Bibb Falk in 1949 and 1950. The Arkansas Razorbacks also fielded fine teams that advanced to the College World Series. The Hogs finished 2nd in 1979, 3rd in 1985 and 5th in both the 1987 and 1989 seasons. The Hogs have continued this tradition since moving to the SEC, reaching the CWS three times under Arkansas alum Dave Van Horn. Texas A&M rose to power in the late 1980s, going 58-5 in 1989 before losing twice in the regional championship round on its home field to LSU. The Aggies reached the College World Series in 1993. Rice began its ascent to college baseball's elite in the conference's final years under coach Wayne Graham, reaching the CWS in 1997, the year after the conference disbanded. 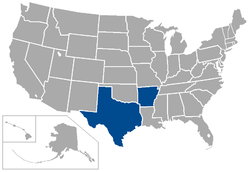 The game ball from the 1995 Bayou Bucket Classic, the last football game in Southwest Conference history

The 1980s saw many of the conference's athletic programs hit by recruiting scandals and NCAA probations.[4][5][6] The only programs to escape probation in the 1980s were Arkansas, Baylor, and Rice.[4][6][7] Because of repeated major violations, in 1987, the SMU Mustangs football program became only the third in NCAA history to receive the so-called "Death Penalty" (after Kentucky basketball in 1952-53 and Southwestern Louisiana basketball from 1973 to 1975). The NCAA canceled SMU's 1987 season, and limited it to seven road games for 1988. However, nearly all of the school's lettermen transferred elsewhere, forcing SMU to keep its football program shuttered for 1988 as well. SMU also remained on probation until 1990. At that time, NCAA rules prohibited schools on probation from appearing on live television. As a result, the conference's market share in television coverage dwindled.

The SWC's performance in football declined precipitously. The last SWC Football Champion to win a bowl game was Texas A&M, who beat Notre Dame in the 1988 Cotton Bowl Classic by a score of 35-10. Since then, the final eight SWC champions lost in their bowl games. After SMU's second-place finish in most polls in 1982, SWC programs usually were not serious contenders for the national title. Texas had strong teams in 1981, 1983, 1990, and 1995. Arkansas had strong teams in 1988 and 1989, and Texas A&M was strong from 1985 to 1995, but by the end of their respective seasons none were able to remain in the national championship hunt.

The last days of the College Football Association

On June 27, 1984, the U.S. Supreme Court ruled in NCAA v. Board of Regents of the University of Oklahoma that the NCAA could not punish its membership for selling their media content. As a result, individual schools and athletic conferences were freed to negotiate contracts on their own behalf.

The Big Ten and Pacific-10 conferences sold their rights to ABC. Most of the rest of the Division I-A football programs (what is now called the Division I Football Bowl Subdivision) chose to sell their rights together through an organization called the College Football Association to ABC and CBS. The primary function of the CFA was to negotiate television broadcast rights for its member conferences and independent colleges.

By 1990, the television landscape had changed and a number of the stronger programs saw opportunities for better deals outside of the CFA. Notre Dame left the CFA and sold their home game broadcast rights to NBC.[8]

The SEC represented one of the more valuable assets in the CFA. It seemed likely if the SEC departed, the other conferences could have quite a difficult time securing good TV deals.

In February 1994, the Southeastern Conference announced that they would be leaving the CFA and negotiate independently for a television deal that covered SEC schools only. This led The Dallas Morning News to proclaim that "the College Football Association as a television entity is dead".[9] In 1995, the SEC and the Big East broke from the CFA, signing a national deal with CBS. The SEC would earn a staggering $95 million from the deal. More significantly, this change in television contracts ultimately would lead to significant realignment of college conferences.

In 1990, Arkansas announced its departure for the Southeastern Conference, marking the beginning of the end for the Southwest Conference. In March 1994, Texas, Texas A&M, Baylor, and Texas Tech accepted invitations to join with the members of the Big Eight Conference to form the Big 12 Conference. Soon afterward, SMU, TCU, and Rice accepted invitations to join the Western Athletic Conference, while Houston became a charter member of Conference USA. In May 1996, after the completion of championship matches in baseball and track & field, the Southwest Conference was officially dissolved.

Over the course of its 82-year history, teams of the Southwest Conference garnered 64 recognized national championships in collegiate sports.

In 1997, the official records of the conference from 1914 to 1996 were moved from Dallas to the campus of Texas Tech University, becoming part of the Southwest Collection/Special Collections Library. The archive also contains an extensive assortment of images and memorabilia from each member university.

President John F. Kennedy referenced the Southwest Conference with the question, "Why does Rice play Texas?" in his September 12, 1962 "Moon Speech" delivered at Rice Stadium.[11]

In a 1982-83 episode of the soap opera Dallas, the character Bobby Ewing (played by Patrick Duffy) said he had been "All-Southwest Conference" in football.