Not to be confused with the mathematical meaning of non-Euclidean geometry. 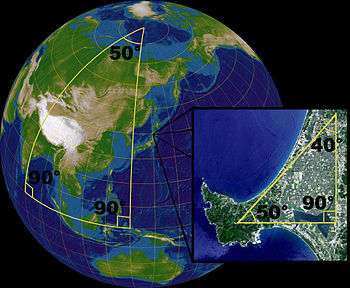 On a sphere, the sum of the angles of a triangle is not equal to 180°. A sphere is not a Euclidean space, but locally the laws of the Euclidean geometry are good approximations. In a small triangle on the face of the earth, the sum of the angles is only slightly more than 180 degrees. The surface of a sphere can be represented by a collection of two dimensional maps. Therefore, it is a two dimensional manifold.

Spherical geometry is the geometry of the two-dimensional surface of a sphere. It is an example of a geometry that is not Euclidean. Two practical applications of the principles of spherical geometry are navigation and astronomy.

In plane geometry, the basic concepts are points and (straight) lines. On a sphere, points are defined in the usual sense. The equivalents of lines are not defined in the usual sense of "straight line" in Euclidean geometry, but in the sense of "the shortest paths between points", which are called geodesics. On a sphere, the geodesics are the great circles; other geometric concepts are defined as in plane geometry, but with straight lines replaced by great circles. Thus, in spherical geometry, angles are defined between great circles, resulting in a spherical trigonometry that differs from ordinary trigonometry in many respects; for example, the sum of the interior angles of a triangle exceeds 180 degrees.

An important geometry related to that of the sphere is that of the real projective plane; it is obtained by identifying antipodal points (pairs of opposite points) on the sphere. (This is elliptic geometry.) Locally, the projective plane has all the properties of spherical geometry, but it has different global properties. In particular, it is non-orientable, or one-sided.

Concepts of spherical geometry may also be applied to the oblong sphere, though minor modifications must be implemented on certain formulas.

The earliest mathematical work of antiquity to come down to our time is On the rotating sphere(Peri kinoumenes sphairas) by Autolycus of Pitane, who lived at the end of the fourth century BC.[1]

The book of unknown arcs of a sphere written by the Islamic mathematician Al-Jayyani is considered to be the first treatise on spherical trigonometry. The book contains formulae for right-handed triangles, the general law of sines, and the solution of a spherical triangle by means of the polar triangle.[5]

The book On Triangles by Regiomontanus, written around 1463, is the first pure trigonometrical work in Europe. However, Gerolamo Cardano noted a century later that much of its material on spherical trigonometry was taken from the twelfth-century work of the Andalusi scholar Jabir ibn Aflah.[6]

Euler published a series of important memoirs on spherical geometry:

With points defined as the points on a sphere and lines as the great circles of that sphere, a spherical geometry has the following properties:[7]

As there are two arcs (line segments) determined by a pair of points, which are not antipodal, on the line they determine, three non-collinear points do not determine a unique triangle. However, if we only consider triangles whose sides are minor arcs of great circles, we have the following properties:

Spherical geometry obeys two of Euclid's postulates: the second postulate ("to produce [extend] a finite straight line continuously in a straight line") and the fourth postulate ("that all right angles are equal to one another"). However, it violates the other three: contrary to the first postulate, there is not a unique shortest route between any two points (antipodal points such as the north and south poles on a spherical globe are counterexamples); contrary to the third postulate, a sphere does not contain circles of arbitrarily great radius; and contrary to the fifth (parallel) postulate, there is no point through which a line can be drawn that never intersects a given line.[8]

A statement that is equivalent to the parallel postulate is that there exists a triangle whose angles add up to 180°. Since spherical geometry violates the parallel postulate, there exists no such triangle on the surface of a sphere. The sum of the angles of a triangle on a sphere is 180°(1 + 4f), where f is the fraction of the sphere's surface that is enclosed by the triangle. For any positive value of f, this exceeds 180°.