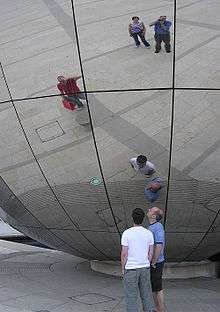 Reflections in a spherical convex mirror. The photographer is seen reflected at top right

A curved mirror is a mirror with a curved reflecting surface. The surface may be either convex (bulging outward) or concave (bulging inward). Most curved mirrors have surfaces that are shaped like part of a sphere, but other shapes are sometimes used in optical devices. The most common non-spherical type are parabolic reflectors, found in optical devices such as reflecting telescopes that need to image distant objects, since spherical mirror systems, like spherical lenses, suffer from spherical aberration. One advantage that mirror optics have over lens optics is that mirrors do not introduce chromatic aberration. A convex mirror, fish eye mirror or diverging mirror, is a curved mirror in which the reflective surface bulges toward the light source. Convex mirrors reflect light outwards, therefore they are not used to focus light. Such mirrors always form a virtual image, since the focal point (F) and the centre of curvature (2F) are both imaginary points "inside" the mirror, that cannot be reached. As a result, images formed by these mirrors cannot be projected on a screen, since the image is inside the mirror. The image is smaller than the object, but gets larger as the object approaches the mirror.

A collimated (parallel) beam of light diverges (spreads out) after reflection from a convex mirror, since the normal to the surface differs with each spot on the mirror. 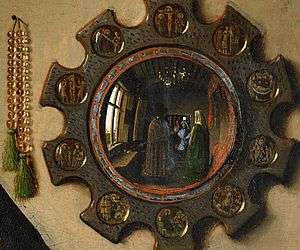 Detail of the convex mirror in the Arnolfini Portrait

The passenger-side mirror on a car is typically a convex mirror. In some countries, these are labeled with the safety warning "Objects in mirror are closer than they appear", to warn the driver of the convex mirror's distorting effects on distance perception. Convex mirrors are preferred in vehicles because they give an upright, though diminished, image. Also they provide a wider field of view as they are curved outwards.

These mirrors are often found in the hallways of various buildings (commonly known as "hallway safety mirrors"), including hospitals, hotels, schools, stores, and apartment buildings. They are usually mounted on a wall or ceiling where hallways intersect each other, or where they make sharp turns. They are useful for people accessing the hallways, especially at locations having blind spots or where visibility may be limited. They are also used on roads, driveways, and alleys to provide safety for motorists where there is a lack of visibility, especially at curves and turns.[1]

Convex mirrors are used in some automated teller machines as a simple and handy security feature, allowing the users to see what is happening behind them. Similar devices are sold to be attached to ordinary computer monitors. Convex mirrors make everything seem smaller but cover a larger area of surveillance.

Round convex mirrors called Oeil de Sorcière (French for "sorcerer's eye") were a popular luxury item from the 15th century onwards, shown in many depictions of interiors from that time.[2] With 15th century technology, it was easier to make a regular curved mirror (from blown glass) than a perfectly flat one. They were also known as "bankers' eyes" due to the fact that their wide field of vision was useful for security. Famous examples in art include the Arnolfini Portrait by Jan van Eyck and the left wing of the Werl Altarpiece by Robert Campin.[3] 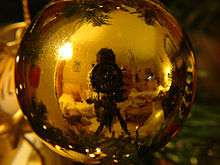 A virtual image in a Christmas bauble.

The image on a convex mirror is always virtual (rays haven't actually passed through the image; their extensions do, like in a regular mirror), diminished (smaller), and upright. As the object gets closer to the mirror, the image gets larger, until reaching approximately the size of the object, when it touches the mirror. As the object moves away, the image diminishes in size and gets gradually closer to the focus, until it is reduced to a point in the focus when the object is at an infinite distance. These features make convex mirrors very useful: since everything appears smaller in the mirror, they cover a wider field of view than a normal plane mirror does. 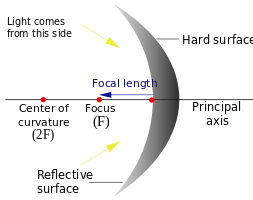 A concave mirror, or converging mirror, has a reflecting surface that bulges inward (away from the incident light). Concave mirrors reflect light inward to one focal point.They are used to focus light. Unlike convex mirrors, concave mirrors show different image types depending on the distance between the object and the mirror.

These mirrors are called "converging mirrors" because they tend to collect light that falls on them, refocusing parallel incoming rays toward a focus. This is because the light is reflected at different angles, since the normal to the surface differs with each spot on the mirror.

Most curved mirrors have a spherical profile. These are the simplest to make, and it is the best shape for general-purpose use. Spherical mirrors, however, suffer from spherical aberration. Parallel rays reflected from such mirrors do not focus to a single point. For parallel rays, such as those coming from a very distant object, a parabolic reflector can do a better job. Such a mirror can focus incoming parallel rays to a much smaller spot than a spherical mirror can.

The Gaussian mirror equation, also known as the mirror and lens equation, relates the object distance

to the focal length

The sign convention used here is that the focal length is positive for concave mirrors and negative for convex ones, and

For convex mirrors, if one moves the

term to the right side of the equation to solve for

, the result is always a negative number, meaning that the image distance is negative—the image is virtual, located "behind" the mirror. This is consistent with the behavior described above.

For concave mirrors, whether the image is virtual or real depends on how large the object distance is compared to the focal length. If the

term is larger than the

The image location and size can also be found by graphical ray tracing, as illustrated in the figures above. A ray drawn from the top of the object to the surface vertex (where the optical axis meets the mirror) will form an angle with that axis. The reflected ray has the same angle to the axis, but is below it (See Specular reflection).

A second ray can be drawn from the top of the object passing through the focal point and reflecting off the mirror at a point somewhere below the optical axis. Such a ray will be reflected from the mirror as a ray parallel to the optical axis. The point at which the two rays described above meet is the image point corresponding to the top of the object. Its distance from the axis defines the height of the image, and its location along the axis is the image location. The mirror equation and magnification equation can be derived geometrically by considering these two rays.

element of the matrix is

is the focal point of the optical device. 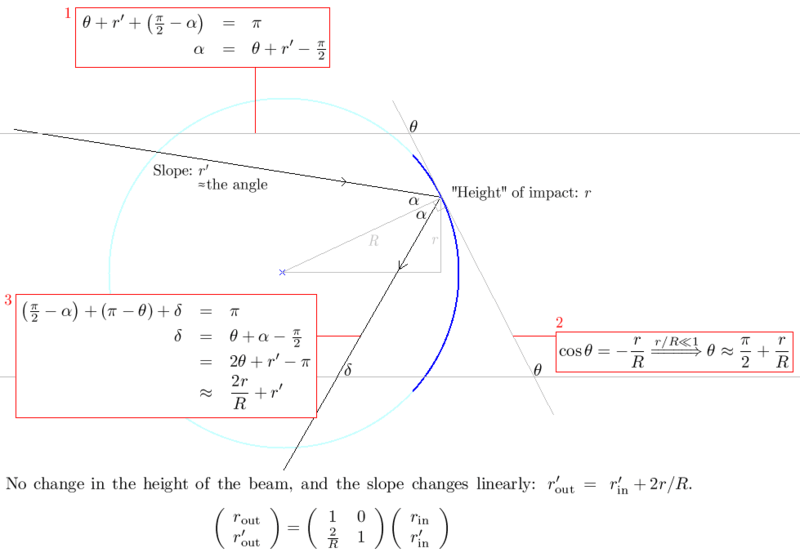 Boxes 1 and 3 feature summing the angles of a triangle and comparing to π radians (or 180°). Box 2 shows the Maclaurin series of

up to order 1. The derivations of the ray matrices of a convex spherical mirror and a thin lens are very similar.