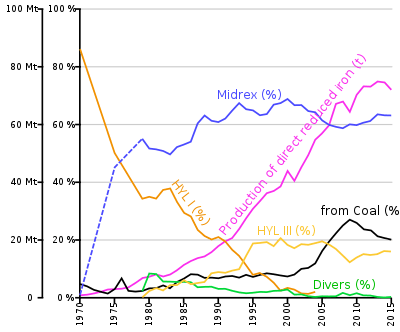 Reduced iron derives its name from the chemical change that iron ore undergoes when it is heated in a furnace at high temperatures in the presence of hydrocarbon-rich gases. Direct reduction refers to processes which reduce iron oxides to metallic iron at temperatures below the melting point of iron. The product of such solid state processes are called direct reduced iron. The reducing gas is a mixture of gases, primarily hydrogen (H2) and carbon monoxide (CO). The process temperature is typically 800 to 1050 °C.[2]

Direct reduction processes can be divided roughly into two categories, gas-based, and coal-based. In both cases, the objective of the process is to drive off the oxygen contained in various forms of iron ore (sized ore, concentrates, pellets, mill scale, furnace dust etc.), in order to convert the ore, without melting it (below 1200 °C), to metallic iron.

The direct reduction process is comparatively energy efficient. Steel made using DRI requires significantly less fuel, in that a traditional blast furnace is not needed. DRI is most commonly made into steel using electric arc furnaces to take advantage of the heat produced by the DRI product.[3]

In modern times, direct reduction processes have been developed to specifically overcome the difficulties of conventional blast furnaces. DRI is successfully manufactured in various parts of the world. The initial investment and operating costs of direct reduction plants are low compared to integrated steel plants and are more suitable for developing countries where supplies of coking coal are limited.

India is the world’s largest producer of direct-reduced iron, a vital constituent of the steel industry.[4] Many other countries use variants of the process, so providing iron for local engineering industries.

Directly reduced iron is highly susceptible to oxidation and rusting if left unprotected, and is normally quickly processed further to steel. The bulk iron can also catch fire since it is pyrophoric.[5] Unlike blast furnace pig iron, which is almost pure metal, DRI contains some siliceous gangue, which needs to be removed in the steel-making process.

Producing sponge iron and then working it was the earliest method used to obtain iron in the Middle East, Egypt, and Europe, where it remained in use until at least the 16th century. There is some evidence that the bloomery method was also used in China, but China had developed blast furnaces to obtain pig iron by 500 BCE.

The advantage of the bloomery technique is that iron can be obtained at a lower furnace temperature, only about 1,100 °C or so. The disadvantage, relatively to using a blast furnace, is that only small quantities can be made at a time.

Sponge iron is not useful by itself, but can be processed to create wrought iron. The sponge is removed from the furnace, called a bloomery, and repeatedly beaten with heavy hammers and folded over to remove the slag, oxidise any carbon or carbide and weld the iron together. This treatment usually creates wrought iron with about three percent slag and a fraction of a percent of other impurities. Further treatment may add controlled amounts of carbon, allowing various kinds of heat treatment (e.g. "steeling").

Today, sponge iron is created by reducing iron ore without melting it. This makes for an energy-efficient feedstock for specialty steel manufacturers which used to rely upon scrap metal.