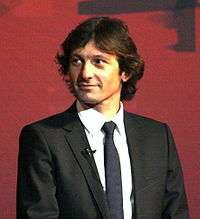 "Director of football" is a term describing a senior management figure at a football club, most commonly used in Europe. The exact nature of the role is often unclear and extremely variable and causes much debate in the sports media.

The presence of a director of football acts as an intermediary between the manager and the board and may relieve pressure on a manager by handling aspects away from day-to-day coaching, allowing a manager to focus on on-pitch performance. The director may also help to stabilise the club – many examples exist of director stepping in as a caretaker manager on the departure of the manager. The director – often an experienced football figure – may also positively advise a less experienced manager or the board of a less well developed club.

In contrast, there are many examples of tensions arising between director and manager, often due to questions over the remit and powers of the two positions; particularly with regard to control over transfer policy. This had led to many well publicised and often, highly damaging disputes within clubs.

In general, directors of football are not shareholders in the club, or hold a nominal stake. This is opposed to other members of the board with whom the director of football will sit.

The level of power and influence in the day-to-day and transfer operations of the club held by a director of football may vary considerably. In some cases, the position may be as a figurehead or as a club ambassador, with transfer dealings, team affairs, squad selection and day-to-day operations handled exclusively by the manager and his staff. Often, the position in this case is filled by a former famous player. Bobby Charlton at Manchester United is such an example. In such a case, the role of the director of football is more one of club promotion and marketing than that of actual control over footballing operations. Employing a well-known football personality in such a position may also be used to enhance the perceived prestige of the club, improving the club's position in the transfer market.

Tension may arise even in this role between manager and director, even if the director is merely a figurehead – should the role be filled by a former (often successful) manager, the presence of that individual within the club may act to undermine the authority of the present manager and act to add pressure during periods of poor performance (for example, from the fans wishing the return of the director to managerial duties).

The presence of Sir Matt Busby at Manchester United as general manager after retirement is generally considered to have undermined his immediate successors in the 1970s, despite his retirement from day-to-day club affairs (although he did return to the manager's seat on an interim basis 18 months after his original "retirement".[1]

Other well known managers have been promoted to director of football or similar roles, including Ron Greenwood at West Ham United in 1974, when first team duties were handed over to coach John Lyall. However, Greenwood returned to frontline management three years later with the England national football team. In January 1994, Lawrie McMenemy returned to Southampton nearly a decade after resigning as manager to become the club's first director of football, a role which he held for more than three years, although the actual management of the team was left to Alan Ball, Dave Merrington and finally Graeme Souness. In March 2002, Harry Redknapp stepped down as director of football at Portsmouth after a year in the role to succeed Graham Rix as manager.

Appointments in this case are often long-term, likely due to the negative reaction of fans to the removal of a former club legend. On occasion, the role has been filled until the death of the director – such as the aforementioned Busby, who remained as a director of Manchester United until his death in January 1994 at the age of 84. Others remain in the role until their health restricts their activities. A notable case is Bob Paisley at Liverpool, who after his retirement as manager in 1983 he was given a seat on the board of directors and held this role until 1992, when at the age of 73 he resigned from the club due to the onset of Alzheimer's disease, four years before his death.

As a technical director

In this case, the director of football may be sought by a board – or even manager – in order to provide advice or technical assistance on footballing or other aspects that are perceived as lacking or desired by the club. This may be the case where the manager is inexperienced or perceived as naive in a particular aspect, allowing the director to advise against potentially costly errors. This may also be the case where a club in a lesser league or lower division with ambitions to develop further and improve their league position seeks an experienced former manager or director from a more prominent league or club in order to use their experience to further the club. Such an example is that of Giovanni Trapattoni at Red Bull Salzburg or Sven-Göran Eriksson at Notts County.

In this case, however, the tag "director of football" may be dropped in order to prevent the "director" from undermining the present manager by his presence at the club with the person taking up a position such as with the youth academy perceived as subordinate to the manager.

Appointments in this case are often short term – for between 1/2 seasons – with the director imparting their advice and departing to another club.

In other cases, the role of the director of football may include control over transfer dealings and targets and aspects outside coaching and squad selection, which are handled by the manager. The director may oversee all levels of the club – youth to first team – with the manager dedicated to first team affairs. Often, a director in this case is a former manager or experienced former coach, often a predecessor of the present manager. This type of director is often installed at the behest of the owners of a club to oversee the manager and act as a go-between of the board and managerial team, or if required help select a new manager. However, such an arrangement has led to controversy in English football due to issues over roles and responsibilities of manager and director – either perceived excessive interference of the director in affairs (such as squad selection) beyond his remit or by attempting to control and criticise aspects of management. A notable recent example of such tension is that of manager Kevin Keegan and director of football Dennis Wise at Newcastle United.

An example of the description of the role in this case as from the perspective of the manager is given by Dave Bassett as:

" ..... a buffer. The director of football is answerable to the board but there to assist the manager. He's experienced in football and there to help the board members who don't have that experience."

Length of appointments in this case are often linked to the fortunes and tastes of the manager and board – directors often departing after the sacking of a manager (for example, Damien Comolli at Tottenham Hotspur) or on appointment of his replacement. On occasion, the director may remain through a number of managers, such as David Pleat.

As a general manager

In the most extreme case, the director of football may act in a role similar to the continental club 'sporting director' or general manager; holding control over transfer policy and targets, team affairs, stadium and training affairs, travel, fixture selection and having input into squad selection and day-to-day club affairs. This is generally confined to the 'sporting' side of the club, with marketing and financial aspects handled by another director or executive. However, rarely is such a position referred to as 'director of football', with 'sporting director' or akin preferred.

The director of football's job is sometimes compared to that of a general manager in a North American professional sports organisation, and often referred to as 'sporting director' or some equivalent in continental Europe. In a structure with a powerful director of football, the position of manager may be officially called 'head coach' or 'head of 1st team affairs' in order to more clearly define the remit of the traditional 'manager' and 'director of football'.

In this case, the length of appointment is intrinsically linked to on-pitch performance, in the same way as a manager.