Squawk on the Street 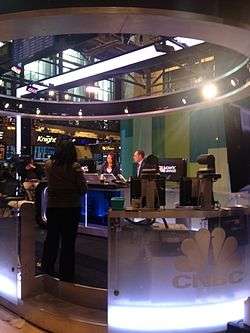 Studio set (Post 9) in NYSE during the Squawk on the Street (2012–present). This set is also shared with Squawk Alley and Closing Bell. 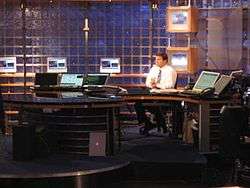 David Faber during the Squawk on the Street in 2007

Squawk on the Street, which debuted on December 19, 2005, is a business show on CNBC that follows the first 90 minutes of trading on Wall Street in the United States.

Originally airing as a one-hour program, the show doubled its airtime to two hours on July 19, 2007 (due in part to Liz Claman's departure from the network).[1] This replaced the first hour of Morning Call (later renamed The Call on August 8, 2007), which aired one hour later and had its airtime reduced in half. On October 17, 2011, Squawk on the Street was expanded to 3 hours, from 9am to noon ET. The Call was canceled as a result of this program's expansion. On May 19, 2014, Squawk on the Street reverted to 2 hours (9am to 11am ET) as a new program, Squawk Alley, debuted on that day.

Squawk on the Street, which is seen at 9:00am ET, is broadcast live at the New York Stock Exchange. Mark Haines and Erin Burnett were the original co-anchors at the NYSE. Haines (the original host of Squawk Box), died on May 24, 2011, 18 days after Burnett left CNBC (May 6, 2011) to host CNN's Outfront (see below Mark Haines). David Faber (who also hosts and contributes to his "Faber Report" segments) originally reported from CNBC Global Headquarters, while Haines and Burnett were in the "Squawk Nest," or "Luxury Box" (as Haines called it) above the NYSE. Contributors include Bob Pisani (NYSE), Bertha Coombs and Scott Wapner. Coombs and Wapner were the original NASDAQ contributors, Wapner left the show in 2010 focusing to host on Fast Money Halftime Report and was replaced by Seema Mody. Leaving Coombs remained in that report along with Mody, were Sharon Epperson (NYMEX) and Rick Santelli (CME Group).

On July 11, 2011, Squawk on the Street debuted an entirely new anchor team at the NYSE. Carl Quintanilla (previously co-anchor of Squawk Box), Melissa Lee (anchor of Fast Money and Options Action) and Simon Hobbs (previously a presenter on CNBC Europe) were appointed as the new anchor team. Mad Money host Jim Cramer joined Quintanilla and Lee as a contributor for the first hour, with Hobbs joining Quintanilla and Lee as a third anchor for the duration. The following year (2012), Faber moved from the network's Englewood Cliffs studio to a new trading-floor studio set (which replaced the old above-the-floor set that had been used since 2005) at the NYSE. The trading-floor studio set located in Post 9 at the NYSE, which debuted in 2012, is shared with Squawk Alley and Closing Bell.

On April 1, 2013, Lee was removed from her anchoring duties on Squawk on the Street and continues on as anchor of Fast Money and Options Action. On May 17, 2013, Kelly Evans (previously the co-anchor of Worldwide Exchange, which is based in CNBC Europe's headquarters in London; now the co-anchor of Closing Bell), became the new co-anchor of Squawk on the Street, her assignment began three days later.[2] Evans officially left her anchoring duties to Closing Bell at the end of 2013 and was replaced by Sara Eisen, who was previously had a contributing role. Sara became a permanent co-anchor in May 2014.[3]

On October 13, 2014, Squawk on the Street, along with CNBC's other trading-day programs, launched in full 1080i high-definition as part of a network-wide switch to a full 16:9 letterbox presentation on that same day.

Around the midway point of the show's first hour was originally the "Opening Bell Countdown," which had a countdown clock on the lower right of the screen. However, since Cramer joined Squawk on the Street in July 2011, the "Opening Bell Countdown" segment has been replaced with "Cramer's Mad Dash." After the opening bells ring at the NYSE and NASDAQ MarketSite, Quintanilla, Cramer and Faber send viewers through the opening minutes of the trading day with the "Opening Buzz" segment (see below). The show originally ended with the anchors looking at the "Stocks to Watch."