St. Xavier's College is a graduate and undergraduate college located in Kolkata, India. Founded in 1860, it is named after St. Francis Xavier, a Navarre Jesuit of the 16th century, who ministered in India. In 2006, it became the first autonomous college in West Bengal, India,[2] and is affiliated to the University of Calcutta. The college is soon to become a full university, and will add new courses including an MBA. Currently, St. Xavier's College, Kolkata offers Undergraduate and Postgraduate degrees, diplomas and certificates. A Student after completing his/her Degree, Diploma or Certificate course is referred to as a 'Xaverian'. The college was awarded the "College Of Excellence" status in April, 2014 and "Special Heritage Status" in July, 2015 by the University Grants Commission (India). The college was also awarded Grade- A+ (CGPA: 3.53/4) by the National Assessment and Accreditation Council. 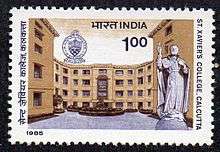 The college was founded in 1860 by the Jesuits, an all-male Catholic religious order formed by Saint Ignatius of Loyola. The college is named after Francis Xavier, the 16th century Jesuit saint from Navarre, north of Spain. The founder of the college is Fr. Henri Depelchin, who oversaw most of the ground work during the foundation years.[3]

Sans Souci Theatre occupied 30 Park Street (now Mother Teresa Sarani), Kolkata-700016, until a fire in 1843 burnt it to the ground. The site was bought by 7 Belgian Jesuits. It is here that the present day campus stands tall.[4]

The present site of the college at 30, Park Street (Mother Teresa Sarani) is an amalgamation of numbers 10 and 11 of Park Street. Premise number 11 was bought for Rs 45,000.00 by Fr. Depelchin with generous donations from the Anglo-Indians and help from the home Jesuit Province of Belgium. Park street is a landmark street in the heart of Kolkata, a melting pot of its diverse cultural, culinary, social, and intellectual milieu.

The college opened with 30 students. Two years later, in 1862, it affiliated with Calcutta University. However, there was a paucity of funds for expansion work in terms of classrooms and to accommodate the Jesuits fathers. So in 1864 the Rector used the newspapers to appeal to the public of Calcutta for assistance and received a magnanimous response from well-wishers in the city. Also, Jesuit Father Henri Depelchin and his assistant Bro. Koppes, the architect of the new school, went around personally collecting funds. The present, imposing, five-storied building took 6 years to build, 1934 to 1940, at a cost of Rs 9 lakhs, which came from donations from the people of Calcutta, assistance from Belgium, and generous rental fees from the U.S. army that occupied the building during the Second World War.[5][6] Expansion of the college has been a ceaseless effort and a campus in Salt Lake City, Kolkata, is on the way, along with a second boys' hostel not far from the existing one.

The Goethals library, situated above the College Chapel, houses some of the oldest periodicals, journals, and books. The College received these treasures in 1908 from the Archbishop of Calcutta, Paul Goethals, S.J. These well-preserved treasures have made the library a spot of historical significance.

A commemorative stamp was issued by the Indian Post on 12 April 1985 depicting the college campus, thus recognizing the college's contribution to society.[5]

The college has Morning batch for boys only, that offers the Bachelor of Commerce degree. The Day section of the college houses the Arts and Science departments which offer undergraduate (honours) degrees in various subjects like English, Bengali, Political Science, Sociology, Microbiology, Computer Science, Animation and Multimedia, Mass Communication and Vidoegraphy, Mathematics, Statistic, Chemistry, Physics, and Economics. Masters programs in Commerce (evening session), Biotechnology (integrated 5 year M.Sc), Physics, Macrobiology, and Education are housed in the college along with the co-educational Bachelor of Commerce and Bachelor of Business Administration programs.[7]

The college, in its first-ever foreign collaboration, has entered into cooperation with the University of Manitoba, Canada. The MOU was unveiled on 4 February 2008 by the principal of the college Fr. P.C. Mathew and the dean of the faculty of food and agricultural sciences at Manitoba University, Professor Michael Trevan.[8] This college also has CAP and other diploma and certificate courses to offer. The batches function in both day and evening.

Classroom 28 at the college.

The college classes are spread over four floors across two buildings. There are over 50 classrooms, half a dozen audio-visual rooms, and three computer laboratories, each with a capacity for over 70 students.

The college also has well-equipped physics, chemistry, and biotechnology laboratories to support the requirements of their respective departments; the Mass Communication and Videography department ows a video library to assist its film students. The Central Library spread over two floors, houses a reference library, periodicals, and scientific journals. There is also an archive. The auditorium, equipped with a state-of-the-art sound and lighting systems, can seat over 800. Football and basketball courts are located behind the main college building and are shared with St. Xavier's Collegiate School, which is housed in an adjacent flank of the college building.

The college also has an observatory that is well equipped to monitor interstellar movements and changes.

Apart from service to the community in the educational sphere, Xavier is also involved in environmental issues, youth welfare, women's welfare, and poverty alleviation. It has an elected Students' Council (SXCSC) which co-ordinates all the cultural activities on campus. The college's many clubs build leadership, creativity, and managerial skills in students. The clubs include:[9]

The college has facilities for cricket, football, basketball, volleyball, table tennis, badminton, and caroom, played at the intra-college and inter-college levels. A sports day is organised every December, when students compete in track and field events before a large city-wide audience. The Undergraduate level sponsors the following prominent festivals:

St.Xavier's is the only English medium college to have separate festivals for Hindi and Bengali. 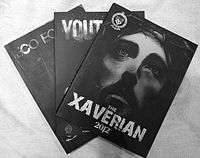 A spread of magazines 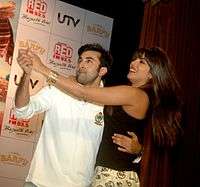 The college has a culture of festivals, inter- and intra-college, that span its academic calendar. Also the campus and auditorium often host discussions and events like the NDTV debate on the Rizwanur Rahman episode.[18] Celebrity guests appearing on campus include:

The college has adopted several villages in West Bengal. It funds the building of proper infrastructure and provides food and shelter for the needy residing in these villages. This is funded by the students and alumni. This project is called Prayass and was started by Rev. Felix Raj, S.J., as principal of the college.[19]

Also, college students assist at the Indian Institute of Cerebral Palsy (IIIIICP) where they teach the special children of IICP every week.[20]

Village to College Camp, a social service festival, is held annually in early January. Underprivileged children are brought to the college campus from nearby villages and slums for a fun-filled day of activity and entertainment. They are also provided with free meals and gifts. This festival is organized by the National Service Scheme (NSS).[21]

The college has a very active Alumni Association with the Principal - Fr. Felix Raj of the college as its President.[22] The association supports the college in several projects by extending financial and managerial assistance. SXCAA is registered under the West Bengal Societies Registration Act.[23] It was the first alumni association in Kolkata to be granted 80G Certification from the Income Tax Department, thus acknowledging SXCAA's philanthropic activities.

SXCAA of late has been expanding its reach to ex-students, by opening chapters in several cities around the world, including Bangalore, Mumbai, Delhi, Singapore, London, Dubai, New York, Dhaka, and Australia.[24]

Project 'Lakshaya' was launched by the college to solicit donations from alumni to fund a new campus.[25] The college was allotted 16 acres of land at Rajarhat (New Town) by the West Bengal government, for the new campus. The plot of land will cost a subsidized 64 crores.[26]

St. Xavier's has benefited from the services of prominent faculty and professors whose teachings have influenced generations of students.