For the church which was used as the Abbey Church from 1856 to 2011, see St Augustine's Church, Ramsgate.

St Augustine's Abbey or Ramsgate Abbey is a former Benedictine abbey in Ramsgate.[1] It was built in 1860 by Augustus Pugin and is a Grade II listed building. It was the first Benedictine monastery to be built in England since the Reformation.[2] In 2010, the monks moved to St Augustine's Abbey in Chilworth, Surrey. The site is now owned by the Vincentian Congregation from Kerala, India. The church of St Augustine, across the road from the abbey site, belongs to the Archdiocese of Southwark and is a shrine of St Augustine of Canterbury.

Augustus Pugin had built his home, The Grange, in Ramsgate, and St Augustine's Church next door. He donated the church to the Catholic Diocese of Southwark before his death in 1852, and The Grange remained in private hands.[3]

In 1856, the Bishop of Southwark, Thomas Grant, invited the Subiaco Cassinese Congregation of the Benedictines to form a monastic community in Kent and take over the running of the church. The abbey was built across the road from the church and this was designed by Edward Pugin and Peter Paul Pugin.[3]

In 1936, in nearby Minster-in-Thanet, a group of Benedictine nuns arrived and set up a priory on the remains of a 7th-century abbey and named it St Mildred's Abbey.

Departure of the Monks 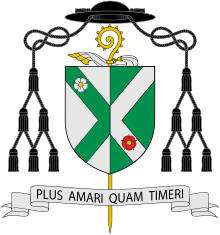 Coat of arms of Dom Paulinus Greenwood, former abbot of the Abbey

On 15 October 2009, it was decided by the monks to relocate to a smaller property which would be easier to maintain. On 23 December 2010, they agreed to move to a former Franciscan friary in Chilworth, Surrey. When they moved in 2011, they named the friary St Augustine's Abbey maintaining continuity between the abbey in Ramsgate and their new home.[4]

St Augustine's Church was returned to the care of the Archdiocese of Southwark. On 1 March 2012, the Archbishop of Southwark, Peter Smith established the church as a Shrine to St Augustine of Canterbury. On 20 May 2012, the church was inaugurated as a shrine at Solemn Vespers and a relic of St Augustine, donated by the Oxford Oratory, was placed in the church.[5]

The abbey was sold by the monks to the Vincentian Congregation in 2014. It is now Divine Retreat Centre UK, and hosts charismatic Catholic retreats.[6]