Stephen John Hadley (born February 13, 1947) was the 21st U.S. Assistant to the President for National Security Affairs (commonly referred as National Security Advisor), serving under President George W. Bush. He has been floated as a potential option for Secretary of Defense under the Trump Administration.[1]

Education and prior government service

Hadley was born in Toledo, Ohio, the son of Suzanne (née Bentley), a homemaker, and Robert W. Hadley, Jr., an electrical engineer.[2][3] He received a B.A. degree in government from Cornell University in 1969, where he was a member of Phi Kappa Psi Fraternity, the Cornell University Glee Club, and the Quill and Dagger society. He later received a Juris Doctor (J.D.) degree from Yale Law School and served as an officer in the United States Navy from 1972 to 1975.

Hadley has served in a variety of capacities in the defense and national security field, including as an analyst for the Comptroller of the Department of Defense from 1972 to 1974, and a member of the National Security Council staff under President Gerald Ford from 1974 to 1977; from 1986 to 1987 he served as Counsel to the Special Review Board established by President Ronald Reagan to inquire into U.S. arms sales to Iran.

During the administration of George H. W. Bush, Hadley was a Pentagon aide to Wolfowitz,[4] serving as the Assistant Secretary of Defense for International Security Policy from 1989 to 1993.[5] In that position, he had responsibility for defense policy toward NATO and Western Europe, on nuclear weapons and ballistic missile defense, and arms control. He also participated in policy issues involving export control and the use of space. Hadley served as Secretary of Defense Cheney's representative in talks led by Secretary of State James Baker that resulted in the Strategic Arms Reduction Treaties (START I and START II).

Hadley served as a senior foreign and defense policy adviser to then-Governor Bush during the 2000 presidential campaign and worked in the Bush-Cheney Transition on the National Security Council. Previous to this position, he was a partner in the Washington, D.C. law firm of Shea & Gardner and a principal in The Scowcroft Group, Inc., an international consulting firm.

He had been Assistant to the President and Deputy National Security Advisor from January 22, 2001. In 2002, Hadley was a member of the White House Iraq Group. He admitted fault in allowing a disputed claim about Iraq's quest for nuclear weapons material from Niger to be included in Bush's January 28, 2003 State of the Union Address (see Niger uranium forgeries). On July 22, 2003, Hadley offered his resignation to Bush because he had "failed in that responsibility" and that "the high standards the president set were not met." Bush denied Hadley's request. Amid this, The Times of London reported that Hadley was Robert Novak's source for Valerie Plame's name in the CIA leak scandal,[6] but this report proved to be false when Richard Armitage admitted that he was Novak's source.[7]

On January 26, 2005, he replaced Condoleezza Rice as National Security Advisor, upon Rice's confirmation as Secretary of State. Beginning in 2009, he served as senior adviser for international affairs at the United States Institute of Peace in Washington, DC.[8] On January 24, 2014, he was elected chairman of the Board of Directors of the U.S. Institute of Peace.[9]

In his book Palestine: Peace Not Apartheid, former president Jimmy Carter recounts that Hadley, in his capacity as national security adviser (Carter calls him by title rather than by name) personally denied Carter permission to visit Syrian president Bashar al-Assad in early 2005, in the wake of the administration's decision to isolate the regime, due its "differences with Syria concerning U.S. policy in Iraq".[10] 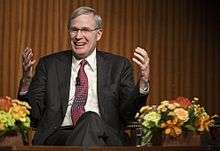 Hadley at the LBJ Presidential Library in 2016

Hadley is a member of the Council on Foreign Relations.[11] He has been a member of the Defense Policy Board, the Foreign Affairs Policy Board, the National Security Advisory Panel to the Director of Central Intelligence, and the Board of Trustees of Analytical Services ("ANSER"). His professional legal practice focused on business problems of U.S. and foreign corporations particularly as they involve international business, regulatory, and strategy issues.

In January 2001, as George W. Bush prepared to take office, Hadley served on a panel for nuclear weapons issues sponsored by the National Institute for Public Policy, a conservative think tank.[12] Other members of the panel included Stephen Cambone, William Schneider, and Robert Joseph. This panel advocated using tactical nuclear weapons as a standard part of the United States defense arsenal.

Hadley is on the Board of Directors at defense contractor Raytheon.[13]

Hadley is a co-founder and principal, along with Condoleezza Rice, Robert Gates and Anja Manuel, in RiceHadley Gates LLC, a strategic consulting firm.[14] Hadley is senior advisor for international affairs at the United States Institute of Peace.[15]

In 2013, Hadley was a signatory to an amicus curiae brief submitted to the Supreme Court in support of same-sex marriage during the Hollingsworth v. Perry case.[16]

During the Syrian chemical weapons crisis in September 2013, Hadley appeared on Bloomberg TV, CNN, MSNBC, Fox News, and also wrote an op-ed piece for the Washington Post in which he advocated attacking Syria with missiles. At the time, Hadley was a director at Raytheon and owned 11,477 shares of stock, but the news organizations failed to disclose the link and conflict of interest.[17][18]

Hadley lives in Washington, D.C. with his wife Ann, a Justice Department lawyer. His daughter Kate graduated from Stanford University in 2008. His younger daughter Caroline is set to graduate from Duke University in 2011 and is pursuing a pre-med track.[19]

This article incorporates text from Stephen Hadley's National Security Council biography, which, as a work of the U.S. government, is in the public domain