Steven L. "Steve" Driehaus (born June 24, 1966 in Cincinnati, Ohio) is a former U.S. Representative for Ohio's 1st congressional district, serving from 2009 until 2011. He is a member of the Democratic Party. He previously served as the Minority Whip in the Ohio House of Representatives.

The district includes the western four-fifths of Cincinnati, as well as suburbs north and west of the city in Hamilton and Butler counties.[1] He was formerly a four-term member of the Ohio House of Representatives, representing the 31st District from 2001 to 2009. His Ohio State House district included western Cincinnati and all of Addyston, Cheviot, Cleves and North Bend, Ohio. 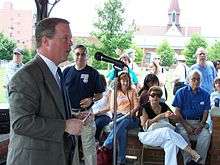 Driehaus, a 1984 graduate and class president of Elder High School in Cincinnati,[2] studied political science at Miami University while earning a B.A. in 1988 and holds a Master of Public Administration (MPA) from Indiana University earned in 1995.[3][4][5] He served as a Peace Corps volunteer in Senegal where he worked with village groups and local schools as a natural resource volunteer to promote sustainable environmental practices from 1988-90.[6]

Driehaus then served as Associate Director of the Center for International Education and Development Assistance at Indiana University. While serving in this role, he coordinated the South African Internship Program, which was sponsored by the United States Information Agency that is the largest professional exchange program between the United States and South Africa.[6] He formerly directed and served as consultant to the Community Building Institute, a collaborative effort of Xavier University and United Way & Community Chest that promotes citizen-led, asset-based community development. He is a member of the Price Hill Civic Club and serves on the Board of Seton High School.[6] He was a part-time political science instructor at Xavier University.[7] He began his political career as an aide for Cincinnati City Council Member Todd Portune and former U.S. Rep. Charlie Luken in the 1990s.[7] 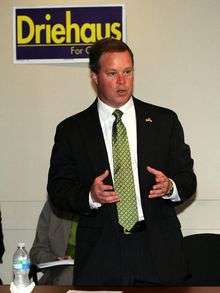 Driehaus took a leadership role on issues such as election law and redistricting reform.[10] He took issue with information privacy in the state. [11]

Driehaus has been a highly regarded politician. The Cincinnati Enquirer named him legislative "Rookie of the Year" during his first term. In 2008, the ARC of Ohio and the Ohio Association of Election Officials named him Democratic Legislator of the Year.[6] He had a reputation as a pro-life fiscal conservative.[14]

In 2000, Driehaus ran for the Ohio House of Representatives from the 33rd district, which at the time included Delhi Township, Price Hill, Sayler Park and other parts of western Hamilton County.[15][16]

The incumbent, Jerome Luebbers, had surrendered his seat due to term limits.[17] In the 2002 redistricting, Driehaus' district became the 31st district and surrendered many Republican constituents.[18][19] Driehaus has served the 31st Ohio House of Representatives district, which has included wards 19–22, 25 & 26 of Cincinnati as well as Cheviot, Cleves, North Bend, and Addyston since the 2002 redistricting. This district is fully contained within Ohio's 1st congressional district. It is also (along with districts 32 and 33) part of Ohio Senate district 9, which encompasses the south central portion of Hamilton County.[20]

Based on the 2000 and 2004 United States Presidential election the district has voted 1% more Republican than the nation as a whole.[31] The district is regarded as a Democratically shifting maturing suburban district that is expected to vote more city-like as it becomes more dense.[8] The district was one of four Republican Ohio congressional seats that the party had targeted for takeover, but Chabot held off Cincinnati Councilman John Cranley by a 52% to 48% margin and the Republicans held on to three of the four seats.[8] 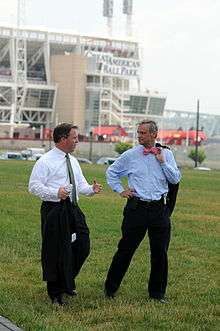 Although Driehaus passed on the 2006 race, he began planning a run for the district in 2008 almost as soon as the 2006 election cycle ended. This was largely because he was barred from running for a fifth term in the state house.[32] Ohio's 1st district was very high on the target list for the Democrats in both 2006 and 2008.[33][34] Seven-term Republican incumbent Steve Chabot, elected in the Republican wave of 1994, had won the district consistently, but with varying margins.[1] He had won the seat with less than 55% of the vote in four of his seven previous victories.[8] 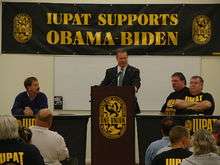 In previous elections, the 1st congressional district was hotly contested. It narrowly favored Democratic Ohio Governor Ted Strickland and United States Senator Sherrod Brown in 2006; and United States President George W. Bush narrowly outpaced Democratic nominee John Kerry by just 1 percentage point in the 2004 United States presidential election.[1] Driehaus was recruited for the race by Democratic party officials,[35] and he received early contributions for this race from Nancy Pelosi, Steny H. Hoyer, James E. Clyburn, and Chris Van Hollen, that were included in his 2007 second quarter financial filings.[36] From the time of the first official announcement on May 3, 2007 and first financial filing deadline on July 15, 2007, the race has been closely watched in the national media, and Time described it as one of the 15 Congressional races to watch in the 2008 election.[35][37] The DCCC has named the district's race as one of the thirteen that it is supporting in hopes of ousting a Republican incumbent in the 2008 United States House of Representatives elections.[38]

In the midst of the financial crisis of 2007–2010, especially the subprime mortgage crisis, one of the issues in the race has been the candidates stances on foreclosures.[39] The race was considered to be close. As of October 14, 2008 (three weeks before election day), The Rothenberg Political Report considered the race to be a toss-up.[40] A poll by Survey USA indicated that African-American turnout would probably determine who won the race.[41]

Driehaus was challenged by Republican nominee and his predecessor, former U.S. Congressman Steve Chabot, as well as Libertarian nominee James Berns, and Green Party nominee Richard Stevenson.[42] As Chabot was ahead in public opinion polls, the DCCC pulled its financial support for TV ads from the Driehaus campaign, indicating to NBC pundit Chuck Todd that they expected Driehaus to be defeated,[43] which he was, 52% to 45%.[44][45]

In October 2012 Driehaus filed a criminal complaint against the Susan B. Anthony List claiming the organization violated Ohio law against making false statements in a campaign advertisement. He later asked that the complaint be dropped. Driehaus later sued the List, claiming the group caused his "loss of livelihood" by "defaming" him by saying he supported taxpayer funded abortion due to his vote for the Affordable Care Act.[46] The case was decided in favor of the Susan B. Anthony List (Defendants) (805 F.Supp.2d 412 (2011)).

In March 2011, Driehaus was selected for an approximately two and a half years tenure as the Peace Corps' director of HIV and AIDS education in Swaziland. This follows on his prior African Peace Corps experience as a volunteer. His wife and three children moved along with him.[49] On June 29, 2011, he completed his staff training and was sworn in for service.[50]

Driehaus was raised in Green Township by H. Donald and Clare Driehaus, along with his seven siblings.[2] He lives with his wife, Lucienne, and their, in Price Hill, Cincinnati. They are congregants at St. Teresa of Avila parish.[5][51] His father, Don Driehaus, is a former Hamilton County Democratic Party co-chairman.[2][7]