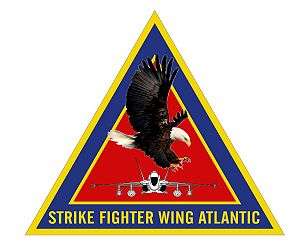 Strike Fighter Wing, U.S. Atlantic Fleet (SFWL) (aka Strike Fighter Wing Atlantic, SFWL, STRKFIGHTWINGLANT) is the U.S. Navy's largest type wing with 18 squadrons flying more than 300 aircraft composed of six different variants of the F/A-18 Hornet and Super Hornet. The wing, based at NAS Oceana, is also home to the east coast F/A-18 Fleet Replacement Squadron (FRS) which trains pilots and Weapon Systems Officers (WSOs) in the Hornet and Super Hornet before they are assigned to operational fleet squadrons. The fleet squadrons deploy as part of Carrier Air Wings (CVWs) on aircraft carriers on both the east and west coasts.

The wing was established in 1970 as Commander, Light Attack Wing (CLAW) at NAS Cecil Field, Florida. With the introduction of the F/A-18 in the late 1980s, the command was redesignated as SFWL. As a result of the Base Realignment and Closure Commission (BRAC) decision to close NAS Cecil Field in 1999, the wing relocated to NAS Oceana, Virginia in 1998. In 2006, SFWL subsumed the staff of Commander, Fighter Wing Atlantic upon the retirement of the F-14 Tomcat and that wing's disestablishment.

Strike Fighter Wing's mission is to provide U.S. Atlantic Fleet commanders with combat-ready Strike Fighter squadrons which are fully trained, properly manned, well maintained and supported. The wing is responsible for the readiness, training, administration, and maintenance support of all Atlantic Fleet F/A-18A-F Hornet and Super Hornet squadrons. Although this basic responsibility extends throughout the deployment cycle of individual units, direct operational control of fleet squadrons is generally retained by Carrier Air Wing commanders, whether deployed or not. The Wing is also the lead advocate for issues, maintenance developments and operational readiness factors impacting the VFA community.

SFWL is commanded by a Navy captain, who is also known as the Wing "Commodore". The wing staff consists of approximately 50 officer, enlisted and civilian personnel. CSFWL reports directly to Commander, Naval Air Force U.S. Atlantic Fleet in Norfolk, Va.