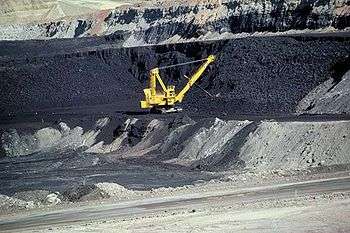 Coal strip mine in Wyoming 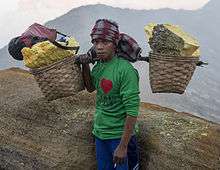 Surface mining, including strip mining, open-pit mining and mountaintop removal mining, is a broad category of mining in which soil and rock overlying the mineral deposit (the overburden) are removed. In contrast to underground mining, in which the overlying rock is left in place, and the mineral removed through shafts or tunnels.

Surface mining began in the mid-sixteenth century[1] and is practiced throughout the world, although the majority of surface coal mining occurs in North America.[2] It gained popularity throughout the 20th century, and surface mines now produce most of the coal mined in the United States.[3]

In most forms of surface mining, heavy equipment, such as earthmovers, first remove the overburden. Next, huge machines, such as dragline excavators or Bucket wheel excavators, extract the mineral.

There are five main forms of surface mining, detailed below.

The Bagger 288 is a bucket-wheel excavator used in strip mining.

"Strip mining" is the practice of mining a seam of mineral, by first removing a long strip of overlying soil and rock (the overburden). It is most commonly used to mine coal and lignite (brown coal). Strip mining is only practical when the ore body to be excavated is relatively near the surface. This type of mining uses some of the largest machines on earth, including bucket-wheel excavators which can move as much as 12,000 cubic meters of earth per hour.

There are two forms of strip mining. The more common method is "area stripping", which is used on fairly flat terrain, to extract deposits over a large area. As each long strip is excavated, the overburden is placed in the excavation produced by the previous strip.

"Contour stripping" involves removing the overburden above the mineral seam near the outcrop in hilly terrain, where the mineral outcrop usually follows the contour of the land. Contour stripping is often followed by auger mining into the hillside, to remove more of the mineral. This method commonly leaves behind terraces in mountainsides.

Strip mining at Garzweiler, Germany. The lignite being extracted is at left, the removed overburden being placed at right. Note that it is a largely flat mine for a horizontal mineral. 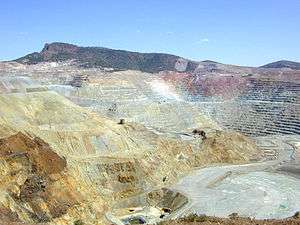 The El Chino mine located near Silver City, New Mexico is an open-pit copper mine.

"Open-pit mining" refers to a method of extracting rock or minerals from the earth through their removal from an open pit or borrow. Although open-pit mining is sometimes mistakenly referred to as "strip mining", the two methods are different (see above).

"Mountaintop removal mining" (MTR) is a form of coal mining that mines coal seams beneath mountaintops by first removing the mountaintop overlying the coal seam. Explosives are used to break up the rock layers above the seam, which are them removed. Excess mining waste or "overburden" is dumped by large trucks into fills in nearby hollow or valley fills. MTR involves the mass restructuring of earth in order to reach the coal seam as deep as 400 feet (120 m) below the surface. Mountaintop removal replaces the original steep landscape with a much flatter topography. Economic development attempts on reclaimed mine sites include prisons such the Big Sandy Federal Penitentiary in Martin County, Kentucky, small town airports, golf courses such as Twisted Gun in Mingo County, West Virginia and Stonecrest Golf Course in Floyd County, Kentucky, as well as industrial scrubber sludge disposal sites, solid waste landfills, trailer parks, explosive manufacturers, and storage rental lockers.[4]

The technique has been used increasingly in recent years in the Appalachian coal fields of West Virginia, Kentucky, Virginia and Tennessee in the United States. The profound changes in topography and disturbance of pre-existing ecosystems have made mountaintop removal highly controversial.

Advocates of mountaintop removal point out that once the areas are reclaimed as mandated by law, the technique provides premium flat land suitable for many uses in a region where flat land is rare. They also maintain that the new growth on reclaimed mountaintop mined areas is better able to support populations of game animals.[5]

Critics contend that mountaintop removal is a disastrous practice that benefits a small number of corporations at the expense of local communities and the environment. A U.S. Environmental Protection Agency (EPA) environmental impact statement finds that streams near valley fills sometimes may contain higher levels of minerals in the water and decreased aquatic biodiversity.[6] The statement also estimates that 724 miles (1,165 km) of Appalachian streams were buried by valley fills from 1985 to 2001.

Blasting at a mountaintop removal mine expels dust and fly-rock into the air, which can then disturb or settle onto private property nearby. This dust may contain sulfur compounds, which some claim corrode structures and tombstones and is a health hazard.[7]

Although MTR sites are required to be reclaimed after mining is complete, reclamation has traditionally focused on stabilizing rock and controlling erosion, but not always on reforesting the area.[8] Quick-growing, non-native grasses, planted to quickly provide vegetation on a site, compete with tree seedlings, and trees have difficulty establishing root systems in compacted backfill.[6] Consequently, biodiversity suffers in a region of the United States with numerous endemic species.[9] Erosion also increases, which can intensify flooding. In the Eastern United States, the Appalachian Regional Reforestation Initiative works to promote the use of trees in mining reclamation.[10]

"Dredging" is a method for placer mining below the water table. It is mostly associated with gold mining. Small dredges often use suction to bring the mined material up from the bottom of a water body. Historically, large-scale dredging often used a floating dredge, a barge-like vessel which scooped material up on a conveyor belt in front, removed the desirable component on board, and returned the unwanted material via another conveyor belt in back. In gravel-filled river valleys with shallow water tables, a floating dredge could work its way through the loose sediment in a pond of its own making.

Highwall mining is another form of surface mining that evolved from auger mining. In Highwall mining, the coal seam is penetrated by a continuous miner propelled by a hydraulic Pushbeam Transfer Mechanism (PTM). A typical cycle includes sumping (launch-pushing forward) and shearing (raising and lowering the cutterhead boom to cut the entire height of the coal seam). As the coal recovery cycle continues, the cutterhead is progressively launched into the coal seam for 19.72 feet (6.01 m). Then, the Pushbeam Transfer Mechanism (PTM) automatically inserts a 19.72-foot (6.01 m) long rectangular Pushbeam (Screw-Conveyor Segment) into the center section of the machine between the Powerhead and the cutterhead. The Pushbeam system can penetrate nearly 1,000 feet (300 m) into the coal seam. One patented Highwall mining systems use augers enclosed inside the Pushbeam that prevent the mined coal from being contaminated by rock debris during the conveyance process. Using a video imaging and/or a gamma ray sensor and/or other Geo-Radar systems like a coal-rock interface detection sensor (CID), the operator can see ahead projection of the seam-rock interface and guide the continuous miner's progress. Highwall mining can produce thousands of tons of coal in contour-strip operations with narrow benches, previously mined areas, trench mine applications and steep-dip seams with controlled water-inflow pump system and/or a gas (inert) venting system.

Recovery is much better than Augering, but the mapping of areas that have been developed by a Highwall miner are not mapped as rigorously as deep mined areas. Very little soil is displaced in contrast with mountain top removal; however a large amount of capital is required to operate and own a Highwall miner. But then this Highwall mining system is the innovative roadmap future potential and stay or being better competitive in the area of environmental friendly non mountain-top (overburden) removal operated by only 4 crew members.

Mapping of the outcrop as well as core hole data and samples taken during the bench making process are taken into account to best project the panels that the Highwall miner will cut. Obstacles that could be potentially damaged by subsidence and the natural contour of the Highwall are taken into account, and a surveyor points the Highwall miner in a line (Theoretical Survey Plot-Line) mostly perpendicular to the Highwall. Parallel lines represent the drive cut into the mountain (up to 1,000 feet (300 m) deep), without heading or corrective steering actuation on a navigation Azimuth during mining results in missing a portion of the coal seam and is a potential danger of cutting in pillars from previous mined drives due to horizontal drift (Roll) of the Pushbeam-Cuttermodule string. Recently Highwall miners have penetrated more than 1050 feet into the coal seam, and today's models are capable of going farther, with the support of gyro navigation and not limited anymore by the amount of cable stored on the machine. The maximum depth would be determined by the stress of further penetration and associated specific-power draw, ("Torsion and Tension" in Screw-Transporters String) but today's optimized Screw-Transporters Conveying Embodiments (called: Pushbeams) with Visual Product Development and Flow Simulation Behaviour software "Discrete Element Modeling" (DEM) shows smart-drive extended penetrations are possible, evenso under steep inclined angles from horizontal to more than 30 degree downhole. In case of significant steep mining the new mining method phrase should be "Directional Mining", dry or wet, Dewatering is developed or Cutting & Dredging through Screw-Transporters are proactive in developing roadmap of the leading global Highwall mining company.

The impact of surface mining on the topography, vegetation, and water resources has made it highly controversial.

Surface mining is subject to state and federal reclamation requirements, but adequacy of the requirements is a constant source of contention. Unless reclaimed, surface mining can leave behind large areas of infertile waste rock, as 70% of material excavated is waste.

In the United States, the Surface Mining Control and Reclamation Act of 1977 mandates reclamation of surface coal mines. Reclamation for non-coal mines is regulated by state and local laws, which may vary widely.

The United Mine Workers of America has spoken against the use of human sewage sludge to reclaim surface mining sites in Appalachia. The UMWA launched its campaign against the use of sludge on mine sites in 1999 after eight UMWA workers became ill from exposure to Class B sludge spread near their workplace.[11]

According to a 2010 report in the journal Science, mountaintop mining has caused numerous environmental problems which mitigation practices have not successfully addressed. For example, valley fills frequently bury headwater streams causing permanent loss of ecosystems. In addition, the destruction of large tracts of deciduous forests has threatened several endangered species and led to a loss of biodiversity.[12]