The substitute bench of the national team of Argentina.

In association football, a substitute is a player who is brought on to the pitch during a match in exchange for an existing player. Substitutions are generally made to replace a player who has become tired or injured, or who is performing poorly, or for tactical reasons (such as bringing a striker on in place of a defender). Unlike some sports (such as American football or ice hockey), a player who has been substituted during a match may take no further part in it.

Most competitions only allow each team to make a maximum of three substitutions during a game, although more substitutions are often permitted in non-competitive fixtures such as friendlies. A fourth substitution in extra time is currently being trialled at several tournaments over a two-year period.[1][2] Each team nominates a number of players (typically between five and seven, depending on the competition) who may be used as substitutes; these players typically sit in the technical area with the coaches, and are said to be "on the bench".

A player who is noted for frequently making appearances, or scoring important goals, as a substitute is often informally known as a "super sub".

The origin of football substitutes goes back to at least the early 1860s as part of English public school football games. The original use of the term "substitute" in football was to describe the replacement of players who failed to turn up for matches. For example, in 1863, a match reports states: "The Charterhouse eleven played a match in cloisters against some old Carthusians but in consequence of the non-appearance of some of those who were expected it was necessary to provide three substitutes.[3] The substitution of absent players happened as early as the 1850s, for example from Eton College where the term "emergencies" is used[4] Numerous references to players acting as a "substitute" occur in matches in the mid-1860s[5] where it is not indicated whether these were replacements of absent players or of players injured during the match.

The first use of a substitute in international football was on 15 April 1889, in the match between Wales and Scotland at Wrexham. Wales's original goalkeeper, Jim Trainer, failed to arrive; local amateur player Alf Pugh started the match and played for some 20 minutes until the arrival of Sam Gillam, who took over from him.[6]

As early as the qualifying phase for the 1954 World Cup, substitutions were permitted during games, the first ever replacement being Horst Eckel of Germany during their match with the Saarland on 11 October 1953.[7] However, the use of substitutes in finals matches was not allowed until the 1970 tournament.

The number of substitutes usable in a competitive match has increased from zero (meaning teams were reduced if players' injuries could not allow them to play on) to one, to two out of a possible five in 1988,[8] two plus one (injured goalkeeper) in 1994,[9] and then (in 1995) to three.[10][11]

Substitutions during matches in the English Football League were first permitted in the 1965–66 season. During the first two seasons after the law was introduced, each side was permitted only one substitution during a game. Moreover, the substitute could only replace an injured player. From the 1967–68 season, this rule was relaxed to allow substitutions for tactical reasons.[12]

On 21 August 1965, Keith Peacock of Charlton Athletic became the first substitute used in the Football League when he replaced injured goalkeeper Mike Rose eleven minutes into their away match against Bolton Wanderers.[13] On the same day, Bobby Knox became the first ever substitute to score a goal when he scored for Barrow against Wrexham.[14]

Archie Gemmill of St Mirren was the first substitute to come on in a Scottish first-class match, on 13 August 1966 in a League Cup tie against Clyde when he replaced Jim Clunie after 23 minutes.[12]

The first official substitute in a Scottish League match was Paul Conn for Queen's Park vs Albion Rovers in a Division 2 match on 24 August 1966. Previously, on 20 January 1917, a player called Morgan came on for the injured Morrison of Partick Thistle after 5 minutes against Rangers at Firhill, but this was an isolated case and the Scottish League did not authorise substitutes until 1966.[12]

In later years, the number of substitutes permitted in Football League matches has gradually increased; at present each team is permitted to name either five or seven substitutes depending on the country and competition, of which a maximum of three may be used. In England, the Premier League increased the number of players on the bench to five in 1996, and it was announced that the number available on the bench would be seven for the 2008–09 season.[15] 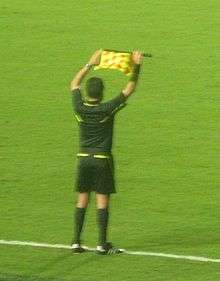 The assistant referee indicating a substitution 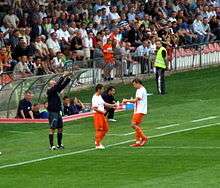 Fourth official notifying the referee of the details of the substitution

A player that has been substituted may take no further part in a match, except where return substitutions are permitted.

Unused substitutes still on the bench, as well as players who have been already substituted, remain under the authority of the referee. These are liable for misconduct, though cannot be said to have committed a foul. For example, in the 2002 FIFA World Cup, Claudio Caniggia was shown the red card for cursing at the referee from the bench.

A player who has been sent off (red card) may not be substituted; the team will have to make do with the remaining players. In the case of a goalkeeper who is sent off, such as in the 2006 UEFA Champions League Final, when Arsenal midfielder Robert Pirès was replaced by second-choice goalkeeper Manuel Almunia to replace Jens Lehmann, who received a red card less than 20 minutes into the match, the coach will usually (but is not required to) substitute an outfield player so that the backup goalkeeper can enter the game. If all substitutions have been used, or if no goalkeeper is unavailable, an outfield player will take up the role of the goalkeeper. A famous example of this is when Chelsea goalkeepers Petr Čech and Carlo Cudicini were both injured in the same game, which led to defender John Terry spending the remainder of the match in goal wearing third-choice goalkeeper Hilário's shirt.[17]

According to the Laws of the Game, "up to a maximum of three substitutes may be used in any match played in an official competition organised under the auspices of FIFA, the confederations or the member associations." Also: