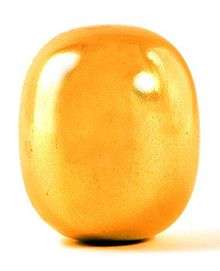 In geometry, a superegg is a solid of revolution obtained by rotating an elongated superellipse with exponent greater than 2 around its longest axis. It is a special case of superellipsoid.

Unlike an elongated ellipsoid, an elongated superegg can stand upright on a flat surface, or on top of another superegg.[1] This is due to its curvature being zero at the tips.

The shape was popularized by Danish poet and scientist Piet Hein (1905–1996). Supereggs of various materials, like the one shown, were sold as novelties or "executive toys" in the 1960s. A 1-ton superegg made of steel and aluminium was placed outside Kelvin Hall in Glasgow in 1971, on occasion of a lecture by Piet Hein.[2]

The superegg is a super-ellipsoid whose horizontal cross-sections are circles. It is defined by the implicit equation

where r is the horizontal radius at the "equator" (the widest part), and h is one half of the height. The exponent p determines the degree of flattening at the tips and equator. Hein's choice was p = 2.5 (the same he used for the Sergels Torg roundabout), and r/h = 3/4.[3]

The definition can be changed to have a strict equality rather than inequality; this changes the superegg to being a surface of revolution rather than a solid.[4]