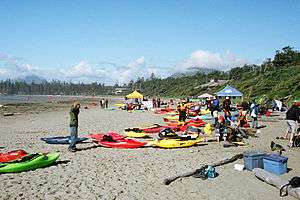 Surf kayaking is the sport, technique, and equipment, used in surfing ocean waves with kayaks. Surf kayaking has many similarities to surf board surfing, but with boats designed for use in surf zones, and with a paddle. A number of kayak designs are used, but all are aimed at better using the waves to propel the craft.

Surf kayaking is popular in many areas frequented by surf board surfers. The sport has grown in popularity over the last decades, in pace with the rise of sea kayaking, and modern materials and techniques.

There are a number of speciality surf kayak designs available. They are often equipped with up to four fins with a three fin thruster set up being the most common. Speciality surf kayaks typically have flat bottoms, and hard rails, similar to surf boards. The design of a surf kayak promotes the use of an ocean surf wave (moving wave) as opposed to a river or feature wave (moving water). They are typically made from glass composites (mixtures of carbon fiber, Kevlar and fiberglass) or rotomolded plastic.

Many kayaks, such as those used in whitewater kayaking on rivers or tidal rapids, are used. Many whitewater designs can be fitted with fins, to assist in control on moving surf waves. (See: Ocean surface wave, Whitewater)

Sea kayaks, generally used for day-trip, to expedition kayaking, are used in surf kayaking. Due to their length, sea kayaks are difficult to manoeuvre in surf. The techniques and strategies utilized in landing kayaks, even when heavily loaded, safely through large open ocean surf, could be considered a sub-discipline of surf kayaking.

Typically double sided kayak paddles. Length is generally proportional to dimensions of boat and paddler, but can range from 160–230 cm. Kayak blades are often 'feathered' (set on an angle in relation to each other), allowing the paddle to pass smoothly through the lip of a wave when paddling into breaking waves. It is not unusual for un-feathered paddles to be used as personal preference.

Surf kayak paddles are generally made from robust materials to last the rigours of the surf zone. Fiberglass, plastic, and carbon fiber are most common.

When paddling in following seas in open ocean swell, it is possible to surf a kayak, thereby increasing one's speed. Ocean swell, having a longer distance between crests than wind waves, allows sea kayaks and other longer boats to surf down the front of the wave. This technique, especially when used on extended expedition trips, can add miles to a day trip.[1]

As with all water sports, surf kayaking carries inherent risks. Participants should gain experience in various swell heights, and wear suitable safety equipment. One should wear a helmet, and suitable PFD. The dangers of cold water immersion, leading to hypothermia should be addressed by wearing a wetsuit, drysuit, or other suitable insulation.

Sea kayak touring sees many injuries associated with accidents in the 'Surf Zone'.[2] Techniques used in landing loaded sea kayaks through surf generally involve following behind the crest of a wave to avoide broaching in following seas. It is very helpful for the sea kayaker who wishes to land through surf to develop a very strong "low brace" in which he/she leans out to sea on the flat blade of the paddle, thereby providing support and hopefully avoiding have the kayak flipped toward the beach.

When kayak surfing in areas frequented by traditional surf boarders, follow surf zone ethics (do not drop in or snake waves, and give right of way). If possible consider paddling a break free of surf boarders. Collisions between other surf kayaks boats or surf boarders can cause significant injury.[3] It is suggested that novice surf kayakers select breaks which are small and gentle (just look for the typical beginner spots that novice surfers frequent). Also, because it is fairly easy to paddle a kayak several miles in search of waves, the surf kayaker can often explore sections of the coastline which are inaccessible to the average board surfer.

At least one surf kayaking death has been recorded:

This article is issued from Wikipedia - version of the 8/21/2015. The text is available under the Creative Commons Attribution/Share Alike but additional terms may apply for the media files.