Symbol from Greek language sunbolon that means a seal, signet ring, legal bond or warrant. From sunballein, to throw together, compare.[1] A name used beginning in the fourth or fifth century, in the East and West, for the declaratory creeds, especially the Apostles' Creed, perhaps suggesting the pact made between the baptismal candidate and God, but more probably deriving from the baptismal confession of faith as a sign and symbol of belief in the Triune God.[1] 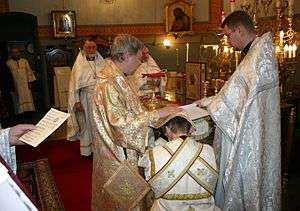 Laying on of hands 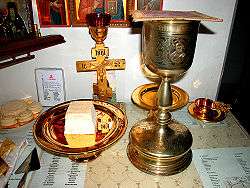 Bread and Wine on Holy Communion

This article is issued from Wikipedia - version of the 4/6/2016. The text is available under the Creative Commons Attribution/Share Alike but additional terms may apply for the media files.