"Grammatical function" redirects here. It is not to be confused with Functional theories of grammar. 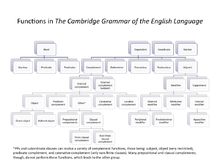 A tree diagram of English functions

The grammatical relations are exemplified in traditional grammar by the notions of subject, direct object, and indirect object:

The subject Fred performs or is the source of the action. The direct object the book is acted upon by the subject, and the indirect object Susan receives the direct object or otherwise benefits from the action. Traditional grammars often begin with these rather vague notions of the grammatical functions. When one begins to examine the distinctions more closely, it quickly becomes clear that these basic definitions do not provide much more than a loose orientation point.

What is indisputable about the grammatical relations is that they are relational. That is, subject and object can exist as such only by virtue of the context in which they appear. A noun such as Fred or a noun phrase such as the book cannot qualify as subject and direct object, respectively, unless they appear in an environment, e.g. a clause, where they are related to each other and/or to an action or state. In this regard, the main verb in a clause is responsible for assigning grammatical relations to the clause "participants".

Most grammarians and students of language intuitively know in most cases what the subject and object in a given clause are. But when one attempts to produce theoretically satisfying definitions of these notions, the results are usually less than clear and therefore controversial.[2] The contradictory impulses have resulted in a situation where most theories of grammar acknowledge the grammatical relations and rely on them heavily for describing phenomena of grammar but at the same time, avoid providing concrete definitions of them. Nevertheless, various principles can be acknowledged that attempts to define the grammatical relations are based on.

The thematic relations (=thematic roles, semantic roles, e.g. agent, patient, theme, goal, etc.) can provide semantic orientation for defining the grammatical relations. There is a tendency for subjects to be agents and objects to be patients or themes. However, the thematic relations cannot be substituted for the grammatical relations, nor vice versa. This point is evident with the active-passive diathesis and ergative verbs:

The torpedo sunk the ship.
The ship sunk.

Another prominent means used to define the syntactic relations is in terms of the syntactic configuration. The subject is defined as the verb argument that appears outside of the canonical finite verb phrase, whereas the object is taken to be the verb argument that appears inside the verb phrase.[3] This approach takes the configuration as primitive, whereby the grammatical relations are then derived from the configuration. This "configurational" understanding of the grammatical relations is associated with Chomskyan phrase structure grammars (Transformational grammar, Government and Binding and Minimalism).

The configurational approach is limited in what it can accomplish. It works best for the subject and object arguments. For other clause participants (e.g. attributes and modifiers of various sorts, prepositional arguments, etc.), it is less insightful, since it is often not clear how one might define these additional syntactic functions in terms of the configuration. Furthermore, even concerning the subject and object, it can run into difficulties, e.g.

There were two lizards in the drawer.

The configurational approach has difficulty with such cases. The plural verb were agrees with the post-verb noun phrase two lizards, which suggests that two lizards is the subject. But since two lizards follows the verb, one might view it as being located inside the verb phrase, which means it should count as the object. This second observation suggests that the expletive there should be granted subject status.

The difficulties facing attempts to define the grammatical relations in terms of thematic or configurational or morphological criteria can be overcome by an approach that posits protoyptical traits. The prototypical subject has a cluster of thematic, configurational, and/or morphological traits, and the same is true of the prototypical object and other verb arguments. Across languages and across constructions within a language, there can be many cases where a given subject argument may not be a prototypical subject, but it has enough subject-like traits to be granted subject status. Similarly, a given object argument may not be prototypical in one way or another, but if it has enough object-like traits, then it can nevertheless receive the status of object.

This third strategy is tacitly preferred by most work in theoretical syntax. All those theories of syntax that avoid providing concrete definitions of the grammatical relations but yet reference them often are (perhaps unknowingly) pursuing an approach in terms of prototypical traits. 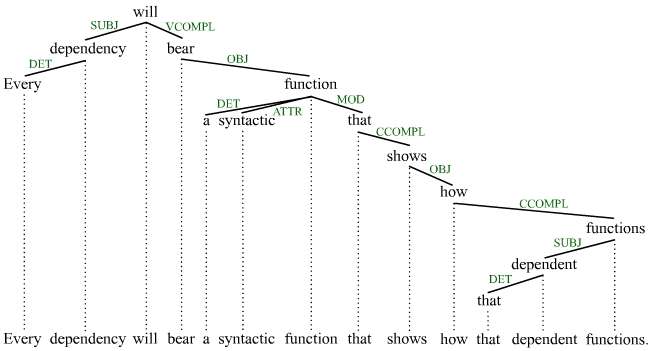