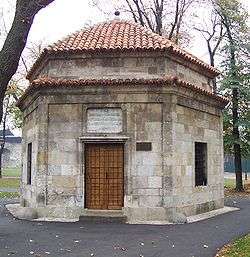 "Türbe of Damad Ali-Pasha, conqueror of the Morea", in Belgrade's Kalemegdan fortress. Note the hexagonal base.

Türbe is the Turkish word for "tomb", and for the characteristic mausoleums, often relatively small, of Ottoman royalty and notables. It is related to the Arabic turbah تُرْبَة (meaning "soil/ ground/ earth"), which can also mean a mausoleum, but more often a funerary complex, or a plot in a cemetery.[1]

A typical türbe mausoleum is located in the grounds of a mosque or complex, often endowed by the deceased. However some are more closely integrated into surrounding buildings. They are usually relatively small buildings, often hexagonal or octagonal in shape, containing a single chamber, which may well be decorated with coloured tiles. A dome normally surmounts the building. They are normally kept closed, but the inside can be sometimes be glimpsed through metal grilles over the windows or door. The exterior is typically masonry, perhaps with tiled decoration over the doorway, but the interior often contains large areas of painted tilework, which may be of the highest quality.

Inside, the body or bodies repose in plain stone sarcophagi, perhaps with a simple inscription, which are, or were originally, covered by rich cloth drapes. In general the sarcophagi are merely symbolic, and the actual body lies below the floor. At the head of the tomb in some examples a wooden pole was surmounted by a white cloth Ottoman turban (for men), or the turban could be in stone.

Earlier examples often had two or more storeys, following the example of the Ilkhanate and Persian tombs on which the style was based; the Malek Tomb is a good example of these. The Ottoman style is also supposed to reflect the shape of the tents used by the earlier nomadic ottomans, and their successors when on military campaigns. Sultans often built their tombs during their lifetimes, although those of other family members, and some sultans, were built after their deaths. Sultan Murad I, assassinated just after his victory at the Battle of Kosovo in 1389, has his türbe there, with his vital organs, while the rest was carried back to his capital at Bursa, where he has another türbe. 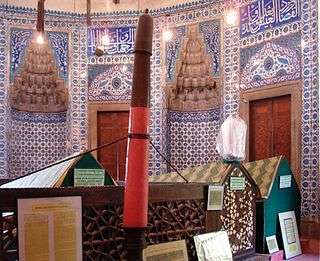 The türbe of Hürrem Sultan (Roxelana) (d. 1558) at the Süleymaniye Mosque in Istanbul, showing tiling, draped sarcophagi, one empty turban pole, and one with a turban (protected by plastic wrapping)

The Süleymaniye Mosque complex has some of the most famous, including that of Suleiman himself (1550s), perhaps the most splendid Ottoman türbe, and that of his wife Hürrem Sultan (Roxelana), which has extremely fine tilework. Close by to the complex is the türbe of its famous architect Mimar Sinan, in what was his garden.

Konya holds two earlier türbe, with conical roofs, of the Seljuk Rum dynasty in the Alâeddin Mosque (12th century onwards), and the türbe of Jalal ad-Din Muhammad Rumi, which is a major shrine and pilgrimage point, just like the türbe of Gül Baba in Budapest, Hungary. Bursa, a capital of the earlier Ottomans before the conquest of Constantinople, holds the turbes of many of the earlier Ottoman Sultans including Osman I and his son, the Muradiye Complex containing Murad II and many princes, and the Yeşil Türbe of Mehmed I (died 1421). This is a large three-story tower, and the (false) sarcophagus itself is covered in tiles. Unusually, much of the exterior is covered with undecorated coloured tiles.

In Bulgaria, the heptagonal türbes of dervish saints such as Kıdlemi Baba, Ak Yazılı Baba, Demir Baba and Otman Baba served as the centers of Bektashi tekkes (gathering places) before 1826.[2] The türbe of Haji Bektash Veli is located in the original Bektashi tekke (now a museum) in the town that now bears his name and remains a site for Alevi pilgrims from throughout Turkey. 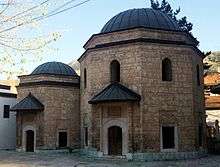 At the peak of the empire, under Gazi Husrev-beg Sarajevo, Bosnia and Herzegovina, became the biggest and most important Ottoman city in the Balkans after Istanbul, with largest marketplace (modern days Baščaršija), and numerous mosques, which by the middle of the 16th century numbered more than 100. By 1660, the population of Sarajevo was estimated to be over 80,000. Husrev-beg greatly shaped the physical city, as most of what is now the Old Town was built during his reign. The Gazi Husrev-beg Mosque (Bosnian: Gazi Husrev-begova Džamija, Turkish: Gazi Hüsrev Bey Camii), is a mosque in Sarajevo historic marketplace Baščaršija, and it was built in 16th century. It is largest historical mosque in Bosnia and Herzegovina and one of the most representative Ottoman structures in the Balkans. Gazi Husrev-beg turbe is located in mosque courtyard.

The Grand Vizier's türbes the heart of Old town of Travnik

Travnik, in modern days Bosnia and Herzegovina, was one of the more important settlements in the region, and was quickly developed, with construction of many mosques, marketplaces, and various infrastructure. During 1699, when Sarajevo was set ablaze by Prince Eugene of Savoy, Travnik became the capital of the Ottoman province of Bosnia and residence of the Bosnian viziers. The city became an important center of government in the whole Western frontier of the empire, and consulates were established by the governments of France and Austria-Hungary. The Grand Viziers were sometimes buried in Travnik, and türbe shrines were erected in their honors in the heart of Old town of Travnik, Bosnia and Herzegovina, where they stand today. 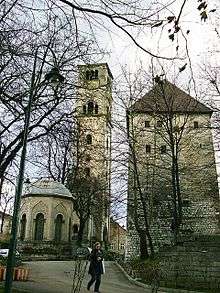 Another fine example of sacral and memorial Bosnian-Ottoman architecture is in Bihać, Bosnia and Herzegovina.