Tamil Keyboard is the keyboard layout used in Computers or any mobile devices to input Tamil language scripts. 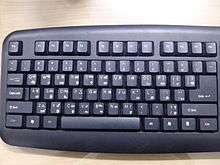 Tamil 99 is a keyboard layout approved by the Tamil Nadu Government. The layout, along with several monolingual and bilingual fonts for use with the Tamil language, was approved by Government order on 13 June 1999.[1]

Designed for use with a normal QWERTY keyboard, typing follows a consonant-vowel pattern. The arrangement of the characters allow for fast and simple tying for users familiar with the script.

InScript (Indian Script) is the standard keyboard for Indian scripts. It is a touch typing keyboard layout for computer. This keyboard layout is standardized by Government of India for inputting text in languages of India written in Brahmic scripts, as well as the Santali language, written in the non-Brahmic Ol Chiki script.[2] It was developed by Indian Government and supported by several public and private organisations. This is the standard keyboard for 12 Indian scripts including Devanagari, Bengali, Gujarati, Gurmukhi, Kannada, Malayalam, Oriya, Tamil and Telugu etc.