The Tapling Collection was donated to the British Museum from the estate of Thomas Tapling in 1891.[1]

It is held in the Philatelic Collections of the British Library and selected items are on permanent public exhibition.[4][5][6] 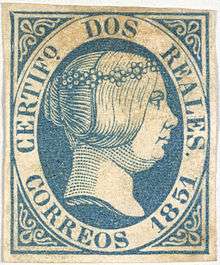 The collection features these rarities:[7]

This article is issued from Wikipedia - version of the 12/4/2015. The text is available under the Creative Commons Attribution/Share Alike but additional terms may apply for the media files.