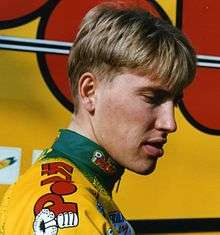 Team Polti is a former Italian professional cycling team. Polti became an independent team back in 1994, after the separation of Lampre-Polti, and was active until 2000. Team Polti began in 1994 with Gianluigi Stanga as directeur sportif and Vittorio Algeri and Claudio Corti as managers. The team used Fausto Coppi bikes.[1] Other directeur sportifs included Giosuè Zenoni, Antonio Bevilacqua and Giovanni Fidanza. Team Polti gave Richard Virenque a chance after he was ejected from the 1998 Tour de France and while maintaining his innocence, his former teammates at Festina admitted taking EPO. Virenque joined Team Polti for the 1999 and 2000 seasons where he won the Mountains Classification at the 1999 and 2000 Tour de France. In July 2007, Former Team Polti rider Jörg Jaksche admitted use of performance-enhancing products and alleged that this began when he was competing with Team Polti in 1997. Jaksche alleged that directeur sportif Gianluigi Stanga introduced him to EPO during the Tour de Suisse in 1997. Stanga immediately denied the accusations.[2]

This article is issued from Wikipedia - version of the 1/20/2016. The text is available under the Creative Commons Attribution/Share Alike but additional terms may apply for the media files.