For other uses, see Yaqui (disambiguation). 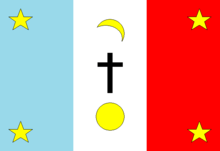 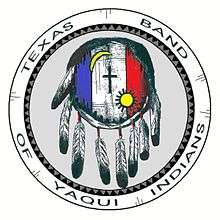 Seal of the Texas band of Yaqui Indians 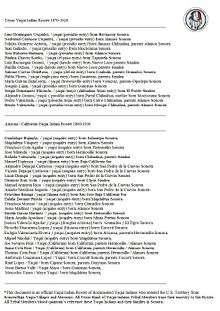 The Texas Band of Yaqui Indians, descendants of a band of Mountain Yaqui Indian fighters from Sonora Mexico, is a group recognized in 2015 as Native American under the laws of the state of Texas, United States.

The band's predecessors were wanted for killing Mexican soldiers in around 1850 and were ultimately chased out of Sonora Mexico in 1870. Yaquis had been executed by Mexican firing squads, forcibly deported or enslaved. 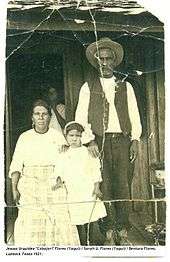 Yaqui Indians in Texas, survivors of the Mexican genocides 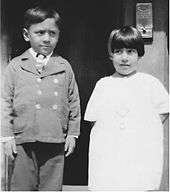 Sierra Yaquis or Mountain Yaquis were different from very well known pueblo or village Yaquis. Mountain Yaquis protected the outer regions of the Hiakim or the Yaqui homelands.[2] They were fierce fighters and warriors who fought against the Mexicans and Americans who came into Yaqui boundary lands in Sonora. Like Comanches and Apaches, they were known to raid villages and farms, taking women, children, livestock and supplies. Nomadic, they would travel in groups from the southwest to northern regions of the US long before Mexico or the US were established.

Weaponry of the Sierra Yaquis was bows and arrows. Spears were often laced with dried poisons from various venomous species. Later after foreign encroachments they changed and adopted firearms. They then in time began to dress like Mexican farmers to not be identified as fighters. Evidence of Mountain Yaquis near Texas was photographed by war photographer Otis Aultman in his collections at the State of Texas Historical Archives [3] Mountain Yaqui fighters prayed to patron saints for protection, especially Our Lady of Guadalupe, for protection from bullets or harm from their enemies. In tribal history, it is said the Mountain Yaquis disappeared after the wars and deportations of the Yaquis and merged with other cultures. The Texas Band of Yaquis held on to their Mountain Yaqui tribal culture and continue to do so within families. There are now over 900 documented tribal members in the states of Texas, Arizona, California and New Mexico.

Ave'lino Cobajori Domingues [4] born in Baviacora, Sonora in 1832, was Chief and Leader of the Mountain Yaquis that killed Mexican soldiers trying to invade a small Yaqui village. He was not made Yaura (leader) until the Band of Yaquis arrived in the Sierra Madres of the neighboring State of Chihuahua then hiding in the town of Jimenez, Chihuahua, bringing Yaqui families and women they captured along the way. Ave'lino known as "Lino" changed his last name of Domingues to Urquides in the town of Jimenez and had six children with his captured Yaqui wife Natividad Carrasco. Ave'lino by description was very mean and strong in stature, always wearing a black rimmed hat and long black hair often braided. By 1870 Mexican Authorities became aware of Yaqui rebels in Jimenez and the Band of Yaquis fled Jimenez into Ojinaga and into the Texas border town of Presideo. Lino Urquides became his name in Presidio and Fort Davis in the years of 1880 to the 1900s. He and the other Yaqui fighters and families hid within families and did not speak to any authorities and were forbidden to say they were Indios Hiaki in fear of death wanted for killing Mexican soldiers. Many of the now Texas Yaquis became laborers and workers for the railroad and many Yaquis went to New Mexico to work. Other Texas Yaquis went to Arizona to be with Arizona Yaquis and many went as far as California and Michigan. Ave'lino was last known to have three different wives and lived to be an old Yoowe in Presidio to 1910. Local people knew him as "Hefe" and he was always surrounded by Yaqui men who never left his side.

Texas Yaquis are not easily compared to Arizona Yaquis and are different in the sense that the Texas Band Yaquis descend from Mountain Yaqui Military Fighters and not Pueblo Village Yaquis. Texas Band Yaquis were the "warlike" Yaquis like many other Bands that robbed trains and villages. Many disappeared and vanished among other cultures except the Texas Band who remained hidden within families forbidden to speak to outsiders they were Hiaki. Devoted to Our Lady of Guadalupe they are known as the fiercest fighters and the most feared Warriors, the Texas Band descend from the names, Cobajori, Bacasegua, Valenzuela, Bacomea, Usacamea and Tonopomea. After the Treaty of Guadalupe Hidalgo ending the wars in Mexico, The U.S. still had to deal with raiding Indians in Mexico along the U.S. Mexican border of Texas. The Federal Government set aside land for a Texas Indian Reservation specifically for Apaches and Yaquis along with other "unidentified" Indians. The Reservation was never established due to the lack of Indian agents to oversee the Reservation and Chief Lino did not want himself and his band to go to the Reservation to be executed or abused by authorities. Original Texas Band Families observe Standard Catholic observances such as Easter, Saints days, and many others. These observances are usually celebrated by the Texas Band Coyote Dances held at night, inherited from their Military Yaqui descendants and hold homage and devotion to "Our Lady of Guadalupe".

The Texas Band of Yaquis are now based in Lubbock, Texas with support from the Pueblos of Vicam, Cocorit Loma de Guamuchil and Vicam Switch in Sonora. 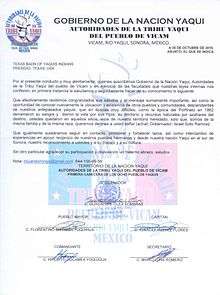 Document of certification from the yaqui nation sonora 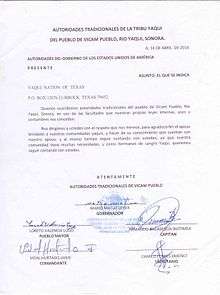 Recognition from the yaqui nation sonora 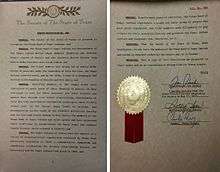 In October 2015, authorities from the Yaqui Pueblo of Vicam in Sonora also recognized the Texas Band of Yaquis as descendants and blood relations to the Yaqui Nation. A meeting took place in the pueblo of Vicam where authorities met and made the Texas Band of Yaquis part of the traditional pueblos, granting them indigenous rights on an international level. 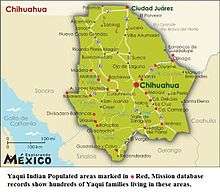 Evidence of Yaqui Indians in the State of Chihuahua are found in online database records in Mexico. They were recorded and documented by the Mormons and include material dating back to the early 1700s.[6]