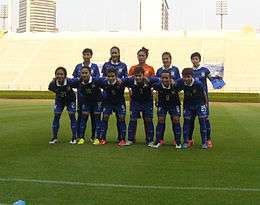 In spite of less investment than the men's team, Thai women's football is on the rise, notably winning the fifth place in 2014 AFC Women's Asian Cup held in Vietnam which qualified them for the 2015 FIFA Women's World Cup, their first ever FIFA Women's World Cup. Due to Thailand's successful campaign in the AFC Women's Asian Cup, the Royal Thai Football Federation announced that they will give more investments in order to build Thailand's first Golden Generation.

In 2005, the country was one of seven teams including Brunei, Thailand, Indonesia, East Timor, Malaysia, Cambodia, Laos, Vietnam, Burma and Singapore, that were expected to field a women's football team to compete at the South East Asian Games in Marikina in December.[3]

Squad for the 2016 AFF Women's Championship.

The following players have been called up for Thailand over the past 12 months.