This article is about the 1932 film. For other uses, see Animal Kingdom (disambiguation). 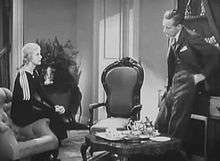 The Animal Kingdom (also known as The Woman in His House in the UK) is a 1932 American pre-Code comedy-drama film directed by Edward H. Griffith based upon a comedy of manners of the same name by Philip Barry.

In 1960, the film entered the public domain (in the USA) due to the claimant's failure to renew its copyright registration in the 28th year after publication.[3]

The film is based on a play, of the same name, set in 1930's New York and Connecticut.

Leni Stengel, with Don Dillaway and Ann Harding in The Animal Kingdom (1932)

Tom Collier (Leslie Howard) is a book publisher who has been living in the city with his best friend and lover Daisy Sage (Ann Harding) without being married. His wealthy father, Rufus Collier (Henry Stephenson), wants him to live a respectable life. While Daisy is away for her job, Tom falls in love with Cecelia (Myrna Loy). Although their lawyer and friend Owen (Neil Hamilton) is in love with Cecelia, he doesn’t have enough financial resources to maintain her interest.

Cecelia tries to get Tom to sell out without his realizing it. She talks him into publishing bad books that will make money and getting rid of his old friends, including “Red”, his prize-fighter friend and butler. She wants Tom to sell his publishing company, live in the city with his father as a "proper gentleman" and take their place in society, which Tom has been fighting all his life.

Daisy tries to stay away, but she and Tom’s Bohemian friends can’t believe he’s happy. She loves him deeply and wants to have children with him, but cares most about his well-being.

Tom complains that he's losing his soul and integrity. Finally, when Cecelia offers Tom champagne to toast selling his publishing company and moving in with his father, Tom realizes that Cecelia's bedroom suite reminds him of a brothel he used to visit, as he says, "in vino veritas".

When Red tells Tom he is going back to the city, that he can’t stomach any more, Tom agrees, saying he’s “going back to his wife,” Daisy.

As he leaves, he puts a little something on the mantle for Cecelia, just as he used to with the girls in the bordello.

Although RKO originally purchased the film rights to The Animal Kingdom as a vehicle for Ann Harding, Irene Dunne was substituted when scheduling conflicts arose with Harding. In an ironic twist of fate, when filming of Smilin' Through did not finish on time and MGM refused to release Leslie Howard to RKO to begin filming The Animal Kingdom at the scheduled time, RKO realized Ann Harding would now be available and reassigned her to the rôle.[4][5]

The text of the play, from 1932, is available from Gutenberg.

The play emphasizes the estrangement between Tom and his father, who has never visited his son's house, before; and that Owen, his one "respectable gentleman" friend, introduced Cecelia to Tom.