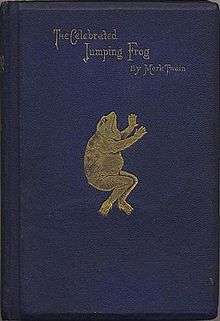 "The Celebrated Jumping Frog of Calaveras County" is an 1865 short story by Mark Twain. It was his first great success as a writer and brought him national attention. The story has also been published as "Jim Smiley and His Jumping Frog" (its original title) and "The Notorious Jumping Frog of Calaveras County". In it, the narrator retells a story he heard from a bartender, Simon Wheeler, at the Angels Hotel in Angels Camp, California, about the gambler Jim Smiley. The narrator describes him: "If he even seen a straddle bug start to go anywheres, he would bet you how long it would take him to get to wherever he going to, and if you took him up, he would foller that straddle bug to Mexico but what he would find out where he was bound for and how long he was on the road."

The Celebrated Jumping Frog of Calaveras County, and Other Sketches is also the title story of an 1867 collection of short stories by Mark Twain. It was Twain's first book and collected 27 stories that were previously published in magazines and newspapers.[1] 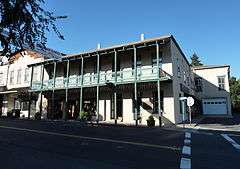 Twain first wrote the it fetches thousands of dollars at auctions.[2] In the book version, Twain changed Greeley back to Smiley.[3]

The narrator is sent by a friend to interview an old man, Simon Wheeler, who might know the location of an old acquaintance named Leonidas W. Smiley. Finding Simon at an old mining camp, the narrator asks him if he knows anything about Leonidas; Simon appears not to, and instead tells a story about Jim Smiley, a man who had visited the camp years earlier.

Jim loves to gamble and will offer to bet on anything and everything, from horse races to dogfights to the health of the local parson's wife. He catches a frog, whom he names Dan'l Webster and trains to jump, on which training he spends three months. When a stranger visits the camp, Jim shows off Dan'l and offers to bet $40 that he can out-jump any other frog in Calaveras County. The stranger, unimpressed, says that he would take the bet if he had a frog, and Jim goes out to catch one, leaving him alone with Dan'l. But during this time, the stranger pours lead shot down Dan'l's throat. Once Jim returns, he and the stranger set the frogs down and let them loose. The stranger's frog jumps away while Dan'l does not budge, and the surprised and disgusted Jim pays the $40 wager. After the stranger has departed, Jim notices that Dan'l appears baggier than usual. Picking Dan'l up, Smiley explodes in rage, "Why, blame my cats, if he don't weigh FIVE POUND!!!" He turns the frog upside down, and Dan'l belches out two handfuls of the lead shot. Realizing that he has been cheated, Jim chases after the stranger but never catches him.

At this point in the story, Simon excuses himself to go outside for a moment. The narrator realizes that Jim has no connection to Leonidas and gets up to leave, only to have Simon stop him at the door, offering to tell about a one-eyed cow with a short banana-like stump for a tail that Jim had owned. But rather than stay to hear another pointless story, the narrator excuses himself and leaves.

Upon discovering a French translation of this story, Twain back-translated the story into English, word for word, retaining the French grammatical structure and syntax. He then published all three versions under the title "The Jumping Frog: in English, then in French, and then Clawed Back into a Civilized Language Once More by Patient, Unremunerated Toil".[4]

In "Private History of the ‘Jumping Frog’ Story", Twain recounts some background to the tale—in particular, his surprise to find that the story bore a striking resemblance to an ancient Greek tale. He wrote:

Now, then, the interesting question is, did the frog episode happen in Angel’s Camp in the spring of ‘49, as told in my hearing that day in the fall of 1865? I am perfectly sure that it did. I am also sure that its duplicate happened in Boeotia a couple of thousand years ago. I think it must be a case of history actually repeating itself, and not a case of a good story floating down the ages and surviving because too good to be allowed to perish.[5]

When I became convinced that the "Jumping Frog" was a Greek story two or three thousand years old, I was sincerely happy, for apparently here was a most striking and satisfactory justification of a favorite theory of mine—to wit, that no occurrence is sole and solitary, but is merely a repetition of a thing which has happened before, and perhaps often.... By-and-by, in England, after a few years, I learned that there hadn't been any Greek frog in the business, and no Greek story about his adventures. Professor Sidgwick [in his textbook for students learning to translate English texts into Greek, Greek Prose Composition, p. 116] had not claimed that it was a Greek tale; he had merely synopsized the Calaveras tale and transferred the incident to classic Greece; but as he did not state that it was the same old frog, the English papers reproved him for the omission. He told me this in England in 1899 or 1900, and was much troubled about that censure, for his act had been innocent, he believing that the story's origin was so well known as to render formal mention of it unnecessary.[6]

But in his "Note To The Thirteenth Edition" (1907), among "hearty .. thanks for the help received", Prof. Sidgwick still failed to acknowledge his use of the Twain tale.[7]

Lukas Foss composed The Jumping Frog of Calaveras County, an opera in two scenes with libretto by Jean Karsavina, based on Twain's story. The opera premiered on May 18, 1950, at Indiana University.[8]

The story was also adapted as a scene in the film The Adventures of Mark Twain (1985), in which Mark Twain retells the story in short to Tom Sawyer, Huck Finn, and Becky Thatcher.

The short story collection The Celebrated Jumping Frog of Calaveras County, and Other Sketches, Twain's first book, contains 27 short stories and sketches.[1] It was released by the American News Company in 1867 under the editorship of Twain's friend Charles Henry Webb.[9] Privately, to his colleague Bret Harte, Twain wrote it was "full of damnable errors of grammar and deadly inconsistencies of spelling in the Frog sketch because I did not read the proofs".[10] After its May release, the book suffered from lackluster sales.[11] The collection included: