The Cross-Wits is an American syndicated game show which premiered on December 15, 1975 and lasted for five seasons until its cancellation on September 12, 1980. The show was hosted by Jack Clark, with Jerri Fiala as hostess. Announcing duties were handled by John Harlan, Jay Stewart, and Jerry Bishop. The show was produced by Ralph Edwards Productions and distributed by Metromedia Producers Corporation.

A second version began airing on September 8, 1986, titled The All-New Crosswits, and was hosted by David Sparks with Michelle Roth as announcer. This version was produced by Crossedwits Productions in association with Outlet Communications, Inc., and distributed by ABR Entertainment.

Both versions were produced as daily shows, although the original Cross-Wits aired in many markets as either a once- or twice-weekly series.

Two teams, each consisting of two celebrities and one contestant, competed to solve clues to crossword puzzles. Each word in the puzzle was also a clue to a master puzzle. 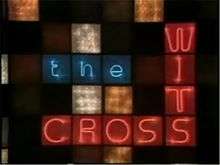 The category of the master puzzle was given at the beginning of each round. The contestant captain chose which position in the crossword puzzle to identify, and which star to play that position. A crossword clue to that word was then read. If the star couldn't answer the clue within seven seconds, the contestant could answer. However, if neither the celebrity nor the contestant answered correctly, control passed to the opposing team. Each correct answer awarded 10 points per letter in the word (e.g., if the word was "scientist", correctly solving the word would be worth 90 points).

The team who correctly solved the master puzzle earned an additional 100 points, while an incorrect solution passed control to the other team. The trailing team began each subsequent round.

Starting in 1976, contestants were awarded a prize for solving the puzzle in addition to the 100 points. From 1976–79, if a puzzle was solved on the first clue in one of the first two rounds, the contestant won a new car. In 1979, this was changed to only awarding a car during the second round each day and with no conference between the celebrities and contestant, although the contestant was still given five seconds to ponder before giving their response. The team who solved the puzzle in the first round also began the second round when the rules changed to only offer a car in the second round; this change was made so that a team did not intentionally lose the first round in order to have a better shot at the car.

The game continued for an unmentioned time limit, and the contestant with the most points when time expired won the game. Starting in 1979, a captain whose team scored 1,000 points also won a $1,000 bonus.

This version was taped before the era of computerized graphics and featured a manually operated game board that used back-lit tiles that illuminated to show the letters in each word. Hostess Fiala would use a long pointer to indicate the position of each word on the board, as the numbers on the squares were too small to be seen by home viewers.

Crossfire round (both versions)

The contestant with the most points at the end of the game played the Crossfire Round along with his/her choice of celebrity partner (a choice of only the winning player's partners in 1975 and a choice of all four in 1986). The team was shown one last crossword puzzle with ten words, none of which were clues to a master puzzle. The team called out words by number and the host read the clue for that word. If the team could solve all ten words in 60 seconds or less, they won the grand prize.

The three celebrities who did not play the Crossfire Round were given boxes, each with the name of one of three cars available. After choosing which car to play for, the contestant then chose a celebrity. If the make of the chosen car matched the card in one of the box held by the chosen celebrity, the contestant won the car. For a time, the fourth celebrity was also a participant in the car round, and a corresponding fourth box was added to the mix; if chosen, it was worth $1,000 to the contestant.

For the first two taped episodes, the car round was staged differently: rather than holding boxes containing the names of the three cars offered, the celebrities held the keys to each of the three cars. After choosing a celebrity, that celebrity attempted to unlock the chosen car with his/her key.

The original version is intact and held by Ralph Edwards Productions, but has not been rerun since its original airings. The revival was shown on The Family Channel from June 7[2] to August 27, 1993[3] and on the now-defunct American Independent Network from 1997 to 1998. On October 26, 2014, cable network GSN aired two episodes of the revived version, featuring Rosie O'Donnell and Arsenio Hall, respectively.[4]

Two pilots were produced in 1966, titled Crossword with George Fenneman as host, both of which are viewable online. The first pilot had Carolyn Jones (who later appeared in 1977) and Michael Landon, while the second used Tippi Hedren and Paul Lynde.

Another pilot was produced in 1971 with Bob Hastings as host, but this episode's status is unknown.

In the United Kingdom, Crosswits ran on ITV from April 27, 1985 to December 23, 1998. The Tyne Tees production was originally helmed by Barry Cryer until 1987, then Tom O'Connor took over for the rest of its run.