"The Golden Bird" collected by the Brothers Grimm and first published in 1812, narrated and recorded on December 14, 2008. 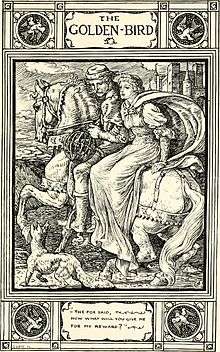 The Golden Bird (from Household stories from the collection of the bros. Grimm (1914)

"The Golden Bird" is a Brothers Grimm fairy tale, number 57, about the pursuit of a golden bird by a king's three sons.[1]

It is Aarne-Thompson folktale type 550, "The Golden Bird", a Supernatural Helper. Other tales of this type include The Bird 'Grip', The Greek Princess and the Young Gardener, Tsarevitch Ivan, the Fire Bird and the Gray Wolf, How Ian Direach got the Blue Falcon, and The Nunda, Eater of People.[4]

Every year, a king's apple tree is robbed of one golden apple during the night. He sets his sons to watch, and though the first two fall asleep, the youngest stays awake and sees that the thief is a golden bird. He tries to shoot it, but only knocks a feather off.

The feather is so valuable that the king decides he must have the bird. He sends his three sons, one after another, to capture the priceless golden bird. The sons each meet a talking fox, who gives them advice for their quest: to choose a bad inn over a brightly lit and merry one. The first two sons ignore the advice and, in the pleasant inn, abandon their quest.

The third son obeys the fox, so the fox advises him to take the bird in its wooden cage from the castle in which it lives, instead of putting it into the golden cage next to it. But he disobeys, and the golden bird rouses the castle, resulting in his capture. He is sent after the golden horse as a condition for sparing his life. The fox advises him to use a leather saddle rather than a golden one, but he fails again. He is sent after the princess from the golden castle. The fox advises him not to let her say farewell to her parents, but he disobeys, and the princess's father orders him to remove a hill as the price of his life.

The fox removes it, and then, as they set out, he advises the prince how to keep all the things he has won. It then asks the prince to shoot it and cut off its head. When the prince refuses, it warns him against buying gallowsflesh and sitting on the edge of wells.

Finally, the third son cuts off the fox's head and feet at the creature's request. The fox is revealed to be a man, the brother of the princess.

In The Golden Blackbird, the king's son set out because the doctors have prescribed the golden blackbird for their ill father. The two older brothers are allured into the inn without any warning, and the youngest meets the talking hare that aids him only after he passes it by. The horse is featured only as a purchase, and he did not have to perform two tasks to win the Porcelain Maiden, the princess figure. Also, the hare is not transformed at the end of the tale.

A similar variant fairy tale of French-Canadian origin is The Golden Phoenix collected by Marius Barbeau, and retold by Michael Hornyansky. It follows the hero Petit Jean, the youngest son of the King, who discovers the thief of his father's golden apple to be a golden Phoenix, a legendary bird. Other differences include a battle with 3 mythical beasts, a Sultan's game of hide-and-seek and his marriage with the Sultan's beautiful daughter.