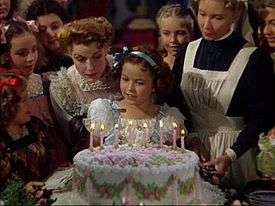 The Little Princess is a 1939 American drama film directed by Walter Lang. The screenplay by Ethel Hill and Walter Ferris is loosely based on the novel A Little Princess by Frances Hodgson Burnett. The film was the first Shirley Temple movie to be filmed completely in Technicolor.[2] It was also her last major success as a child star.[3]

Although it maintained the novel's Victorian London setting, the film introduced several new characters and storylines and used the Second Boer War and the Siege of Mafeking as a backdrop to the action. Temple and Arthur Treacher had a musical number together, performing the song "Knocked 'Em in the Old Kent Road". Temple also appeared in an extended ballet sequence. The film's ending was drastically different from the book.

In 1968, the film entered the public domain (in the USA) due to the claimants' failure to renew its copyright registration in the 28th year after publication.[4]

Captain Crewe (played by Ian Hunter), called to fight in the Second Boer War, has to leave his daughter Sara (Shirley Temple) with her pony at Miss Minchin's School for Girls. With all the money Captain Crewe can offer, Miss Minchin gives Sara a fancy, private room.

Although worried about her father, Sara is distracted by riding lessons. Sara hears news that Mafeking is free and expects her father will soon come home. Miss Minchin throws Sara a lavish birthday party. During the party, Captain Crewe's solicitor (E. E. Clive) arrives with the sad news that Captain Crewe has died and his real estate, the basis for his wealth, has been confiscated. Miss Minchin ends Sara's party abruptly. Without her father's financial support, Sara becomes a servant, now working at the school she used to attend. Sara gains new solace in a friendship with Ram Dass (Cesar Romero) who lives next door. She also receives support from Miss Minchin's brother, Hubert, who does not agree with her treatment.

In her new role Sara gets hungrier and more tired from her arduous duties and sneaks off to Veterans Hospitals, convinced her father is not dead. After a string of episodes including a performance of the film's most well-known song "Knocked 'em in the Old Kent Road", Sara is at her wits end. Taunting from Lavinia (Marcia Mae Jones) causes Sara to lose her temper. Miss Minchin arrives in the attic, discovers blankets that Ram Dass left Sara, assumes they are stolen, and locks her in the attic, calling the police. Sara escapes and runs to the hospital with Minchin in hot pursuit.

Meanwhile the hospital is preparing to transfer a newly arrived patient, who is unable to communicate except to repeatedly say, "Sara, Sara"; it is Captain Crewe, but "his papers have been lost" and no one knows who he is. Sara is initially barred from entering the hospital but sneaks in, only to burst in upon a visit by Queen Victoria, who grants her permission to search for her father. Sara searches the wards unsuccessfully, but happens upon her father as she hides from Miss Minchin and the police.

Miss Minchin, who pursued Sara to the hospital, is appalled that her brother thinks Sara is innocent. A staff member announces Sara has found her father, Miss Minchin exclaims: "Captain Crewe is alive?!" to which her brother retorts, "Of course he's alive! How could she find him if he wasn't alive?" The film ends with Sara helping her father stand as the Queen departs.

After filming was completed, Daryl Zanuck of Fox requested additional scenes shot totalling $300,000 pushing the cost over $1 million. This made the movie the most expensive Shirley Temple film to date.[1]

As part of the preparation for the movie, great pains were taken to make sure every aspect of it was true to 1899 and England, the time period and setting of the story. Props such as the doll had to be to the exact specifications of a doll made at that time. Clothing also had to be precise. Production was held up after it was discovered that one of the costumes Temple wore used snap fasteners that were not invented until 1908.[6]

During the scene where Temple dumps ashes on Marcia Mae Jones' character, the original plan was to do it in one take. Temple, however, who was angry about the attention received by Sybil Jason in a previous scene, intentionally froze after dumping the ashes on Jones. It ruined the take and forced a redo.[7]

For the ballet dance scene, Temple was trained by ballet dance instructor Ernest Belcher. The instructions were not a success, however, as Temple had little to show after a couple weeks of intense training. As a way around this, the choreographers had her backed by a troupe of accomplished ballet dancers to hide her inability to stand on her toes. Temple rented her pony Spunky to the studio to simply lie down in the stall. The artificial green coloration of the straw (which was green so it would show better In Technicolor) however caused the pony to become restless and resulted in him being removed and Temple losing his appearance fee. During a scene where Temple was to pick up a small monkey belonging to Romero's character, the monkey was startled and bit her, causing her to get a tetanus shot.[8]

As a way of fitting in with the rest of the crew, Temple wanted to have her own punch card for punching in and out of work for the day and was initially rebuffed. The director Lang eventually relented and gave her a card to use. IBM caught word of Temple's enthusiasm and provided a special custom made punch card recorder embossed with her name along with punch cards with her photo on them. The machine sat unused while Temple continued using the regular machine. Her time cards were likewise ignored by the studio payroll person.[9]

According to Variety, "Transposition of the Frances Hodgson Burnett several-generation favorite, Sara Crewe, is accomplished most successfully. The fairy-tale story is still saccharine to the nth degree, but once the basic premise is established, it rolls along acceptably. And, while the story has been changed for screen purposes, the general line is close enough."[2]

Benjamin R. Crisler, who reviewed the film when it opened in New York City at Roxy Theatre, said

"With any other child on earth, it is amazing to reflect, The Little Princess would stand out as one of the most glaring exhibits of pure hokum in screen history; with Mistress Temple, it may very well be, as Mr. Zanuck unflinchingly proclaims, the greatest picture with which Mr. Zanuck has ever been associated."

Janet Maslin, writing for The New York Times 44 years later, on the occasion of its VHS release by Media Home Entertainment, called it "antiquated enough to seem charming" and concludes "[t]he movie's music, its corny but likable histrionics and its rousing patriotism (it was made in 1939) culminate in a happy ending sure to make even grown-up viewers cry."[10]