The Masque of the Red Death

For other uses, see The Masque of the Red Death (disambiguation).

"The Masque of the Red Death", originally published as "The Mask of the Red Death: A Fantasy" (1842), is a short story by Edgar Allan Poe. The story follows Prince Prospero's attempts to avoid a dangerous plague, known as the Red Death, by hiding in his abbey. He, along with many other wealthy nobles, hosts a masquerade ball within seven rooms of the abbey, each decorated with a different color. In the midst of their revelry, a mysterious figure disguised as a Red Death victim enters and makes his way through each of the rooms. Prospero dies after confronting this stranger, whose "costume" proves to contain nothing tangible inside it; the guests also die in turn.

The story follows many traditions of Gothic fiction and is often analyzed as an allegory about the inevitability of death, though some critics advise against an allegorical reading. Many different interpretations have been presented, as well as attempts to identify the true nature of the titular disease. The story was first published in May 1842 in Graham's Magazine and has since been adapted in many different forms, including a 1964 film starring Vincent Price. Additionally, it has been alluded to by other works in many types of media. 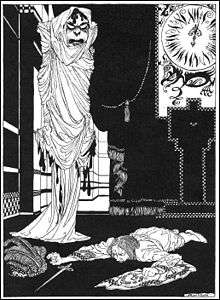 The story takes place at the castellated abbey of the "happy and dauntless and sagacious" Prince Prospero. Prospero and 1,000 other nobles have taken refuge in this walled abbey to escape the Red Death, a terrible plague with gruesome symptoms that has swept over the land. Victims are overcome by "sharp pains", "sudden dizziness", and hematidrosis, and die within half an hour. Prospero and his court are indifferent to the sufferings of the population at large; they intend to await the end of the plague in luxury and safety behind the walls of their secure refuge, having welded the doors shut.

One night, Prospero holds a masquerade ball to entertain his guests in seven colored rooms of the abbey. Each of the first six rooms is decorated and illuminated in a specific color: blue, purple, green, orange, white, and violet. The last room is decorated in black and is illuminated by a scarlet light, "a deep blood color" cast from its stained glass windows. Because of this chilling pairing of colors, very few guests are brave enough to venture into the seventh room. A large ebony clock stands in this room and ominously chimes each hour, upon which everyone stops talking or dancing and the orchestra stops playing. Once the chiming stops, everyone immediately resumes the masquerade.

At the chiming of midnight, the revelers and Prospero notice a figure in a dark, blood-splattered robe resembling a funeral shroud. The figure's mask resembles the rigid face of a corpse and exhibits the traits of the Red Death. Gravely insulted, Prospero demands to know the identity of the mysterious guest so they can hang him. The guests, too afraid to approach the figure, instead let him pass through the six chambers. The Prince pursues him with a drawn dagger and corners the guest in the seventh room. When the figure turns to face him, the Prince lets out a sharp cry and falls dead. The enraged and terrified revelers surge into the black room and forcibly remove the mask and robe, only to find to their horror that there is nothing underneath. Only then do they realize the figure is the Red Death itself, and all of the guests contract and succumb to the disease. The final line of the story sums up, "And Darkness and Decay and the Red Death held illimitable dominion over all". 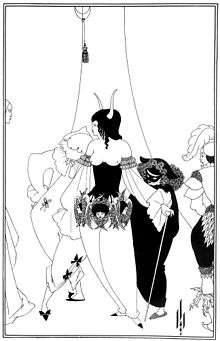 In "The Masque of the Red Death", Poe adopts many conventions of traditional Gothic fiction, including the castle setting. The multiple single-toned rooms may be representative of the human mind, showing different personality types. The imagery of blood and time throughout also indicates corporeality. The plague may, in fact, represent typical attributes of human life and mortality,[1] which would imply the entire story is an allegory about man's futile attempts to stave off death (a commonly accepted interpretation).[2] However, there is much dispute over how to interpret "The Masque of the Red Death"; some suggest it is not allegorical, especially due to Poe's admission of a distaste for didacticism in literature.[3] If the story really does have a moral, Poe does not explicitly state that moral in the text.[4]

Blood, emphasized throughout the tale, along with the color red, serves as a dual symbol, representing both death and life. This is emphasized by the masked figure – never explicitly stated to be the Red Death, but only a reveler in a costume of the Red Death – making his initial appearance in the easternmost room, which is colored blue, a color most often associated with birth.[5]

Though Prospero's castle is meant to keep the sickness out, it is ultimately an oppressive structure. Its maze-like design and tall and narrow windows become almost burlesque in the final black room, so oppressive that "there were few of the company bold enough to set foot within its precincts at all".[6] Additionally, the castle is meant to be an enclosed space, yet the stranger is able to sneak inside, suggesting that control is an illusion.[7]

Like many of Poe's tales, "The Masque of the Red Death" has been interpreted autobiographically, by some. In this point of view, Prince Prospero is Poe as a wealthy young man, part of a distinguished family much like Poe's foster parents, the Allans. Under this interpretation, Poe is seeking refuge from the dangers of the outside world, and his portrayal of himself as the only person willing to confront the stranger is emblematic of Poe's rush towards inescapable dangers in his own life.[8] Prince Prospero is also the name of a character in William Shakespeare's The Tempest.[9]

The disease called the Red Death is fictitious. Poe describes it as causing "sharp pains, and sudden dizziness, and then profuse bleeding at the pores" leading to death within half an hour.

The disease may have been inspired by tuberculosis (or consumption, as it was known then), since Poe's wife Virginia was suffering from the disease at the time the story was written. Like the character Prince Prospero, Poe tried to ignore the fatality of the disease.[10] Poe's mother Eliza, brother William, and foster mother Frances had also died of tuberculosis. Alternatively, the Red Death may refer to cholera; Poe would have witnessed an epidemic of cholera in Baltimore, Maryland in 1831.[11] Others have suggested the pandemic is actually Bubonic plague or the Black death, emphasized by the climax of the story featuring the "Red" Death in the "black" room.[12] One writer likens the description to that of a viral hemorrhagic fever or necrotizing fasciitis.[13] It has also been suggested that the Red Death is not a disease or sickness at all but a weakness (like "original sin") that is shared by all of humankind inherently.[14]

Poe first published the story in the May 1842 edition of Graham's Lady's and Gentleman's Magazine as "The Mask of the Red Death", with the tagline "A Fantasy". This first publication earned him $12.[15] A revised version was published in the July 19, 1845 edition of the Broadway Journal under the now-standard title "The Masque of the Red Death."[16] The original title emphasized the figure at the end of the story; the new title puts emphasis on the masquerade ball.[17]