The Miami News was an evening newspaper in Miami, Florida. It was the media market competitor to the morning edition of the Miami Herald for most of the 20th century. The paper started publishing in May 1896 as a weekly called The Miami Metropolis.[1] The Metropolis had become a daily (except Sunday) paper of eight pages by 1903.[2] On June 4, 1923, former Ohio governor James M. Cox bought the Metropolis and renamed it the Miami Daily News-Metropolis.[3] On January 4, 1925 the newspaper became the Miami Daily News, and published its first Sunday edition.[4]

Cox had a new building erected for the newspaper, and the Miami News Tower was dedicated on July 25, 1925. This building later became famous as the Freedom Tower. Also on July 25, 1925, the News published a 508 page edition, which still holds the record for the largest page-count for a newspaper.[4]

The News was edited by Bill Baggs from 1957 until his death 1969.[5] After that, it was edited by Sylvan Meyer until 1973. Its final editor was Howard Kleinberg, a longtime staffer and author of a comprehensive history of the newspaper. The paper had the distinction of posting its own demise on the final obituary page.

In 1973 the News moved in with the Herald at One Herald Plaza, sharing production facilities with its morning rival while maintaining a separate editorial staff.[5] The Miami News ceased publication on December 31, 1988. Some of the newspaper's staff and all of its assets and archives were moved to nearby Cox Newspapers sister publication The Palm Beach Post in West Palm Beach. An entire searchable archive of the newspaper will be available online via Newspapers.com sometime in 2016. [6]

A small selection of photographs were donated to the Archives and Research Center of HistoryMiami.[7] 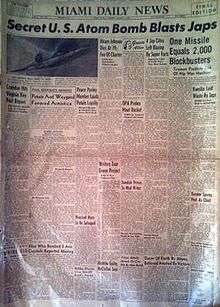