The Night of the Hunter (film)

The Night of the Hunter is a 1955 American film noir directed by Charles Laughton and starring Robert Mitchum, Shelley Winters and Lillian Gish.[1] Based on the 1953 novel of the same name by Davis Grubb, it was adapted for the screen by James Agee and Laughton. The plot focuses on a corrupt reverend-turned-serial killer who attempts to charm an unsuspecting widow and steal $10,000 hidden by her executed husband.

The novel and film draw on the true story of Harry Powers, hanged in 1932 for the murder of two widows and three children in Clarksburg, West Virginia. The film's lyrical and expressionistic style with its leaning on the silent era sets it apart from other Hollywood films of the 1940s and 1950s, and it has influenced later directors such as David Lynch, Martin Scorsese, Terrence Malick, Jim Jarmusch, Spike Lee, and the Coen brothers.

In 1992, The Night of the Hunter was deemed "culturally, historically, or aesthetically significant" by the United States Library of Congress and was selected for preservation in the National Film Registry. The influential film magazine Cahiers du cinéma selected The Night of the Hunter in 2008 as the second-best film of all time, behind Citizen Kane.[2]

In West Virginia in the 1930s, along the Ohio River, Reverend Harry Powell, a serial killer, flees the scene of his latest murder. Powell is a self-anointed preacher with a penchant for switchblade knives, a misogynist who is both attracted to and repulsed by women. He travels rural roads, preaching in small towns, and rationalizes his murders by telling himself that he is punishing sinful women and gaining money to preach God's word. The letters "L-O-V-E" are tattooed on the fingers of his right hand, and the letters "H-A-T-E" on those of his left hand. Powell uses them as symbols in impromptu sermons. In one small town, police arrest Powell for driving a stolen car and he is sentenced to jail.

Meanwhile, a local family man named Ben Harper kills two people in a bank robbery. He arrives home and hides the money he has stolen inside his daughter's rag doll. He convinces his two young children, John and Pearl, to keep the hiding place secret. The police arrive and arrest Ben, while John is shocked by the way the police roughly overpower his father.

Harper and Powell share a cell where Powell, soon to be released, tries without success to learn the location of the stolen money. Harper lets slip enough information to allow Powell to determine that Harper's children must know where the money is. Harper is executed for his crimes, while Powell is released from jail, and then woos and marries Harper's widow, Willa.

Powell charms most of the townsfolk, but John remains distrustful. John does not share the money's hiding place with Powell and must constantly remind his younger and more trusting sister Pearl to maintain the secret. Willa eventually discovers that Powell is searching for the money, though he has earlier denied this to her. Still, the pious Willa believes he married her to show her God's light rather than to gain access to the money. Powell murders her, dumps her body in the river, and covers up her disappearance by claiming she has abandoned him and the children for a life of sin.

With this cover story Powell retains the trust and sympathy of the townsfolk. His position in the town becomes even more secure. Willa's drowned body is discovered by Birdie Steptoe, an elderly man who spends his days drinking on his riverboat and is friendly with John. Birdie keeps his discovery a secret out of fear the town will blame him for her death. Nobody else in town is willing to take John's side against Powell.

Left to care for John and Pearl, Powell threatens their lives and learns the money is hidden inside the doll. The children flee down the river with the doll and take sanctuary with Rachel Cooper, a tough old woman who looks after stray children. Powell tracks them down, but Rachel sees through him and runs him off her property. Powell returns after dark, as he had threatened, and in the ensuing all-night standoff he is wounded by a shot. The police, by now having discovered Willa's body, arrive to arrest Powell. John breaks down as he witnesses the arrest of Powell as a parallel to the arrest of his real father. John takes the doll and beats it against the handcuffed Powell. As the money spills out, he insists that Powell can have the cash if he wants it.

Powell is tried, convicted, and sentenced for his crimes. Several of the townsfolk previously depicted as his staunchest defenders sit in the public gallery drinking and shouting abuse at him. A lynch mob tries to take Powell from the police station but the police retreat with him out the back of the building as the professional executioner promises to see Powell again soon. Finally, John and Pearl have their first Christmas together with Rachel and their new family.

Producer Paul Gregory read the novel The Night of the Hunter and decided to make a film about it, with his friend Charles Laughton as a director. The film was a collaboration of Charles Laughton and screenwriter James Agee. Laughton drew on the harsh, angular look of German expressionist films of the 1920s.[3] Laughton's directing style was supportive and respectful of the actors' input and several of the actors have said it was among their favorite professional experiences.

Laughton considered casting Gary Cooper as Harry Powell, who couldn't accept the role as being possibly detrimental to his career.[4] Laurence Olivier and John Carradine also expressed interest in the role of the reverend.

Robert Mitchum was eager for the part of the preacher. When he auditioned, a moment that particularly impressed Charles Laughton was when Laughton described the character as "a diabolical shit" and Mitchum promptly answered, "Present!"

Shelley Winters was cast as Willa Harper, the woman who is killed by Powell. Winters said that this was "the most thoughtful and reserved performance I ever gave."

Laughton envisioned his wife Elsa Lanchester to play the role of Rachel Cooper. Jane Darwell, Helen Hayes, Agnes Moorehead and Louise Fazenda were also considered. Lanchester, for reasons unknown to Laughton, turned down the role, suggesting silent movie legend Lillian Gish for the role instead. A doubtful Laughton went to New York for the purpose of watching films that Gish starred in. These included the shorts and feature films she made with pioneer D.W. Griffith. When Gish asked Laughton he replied, "When I first went to the movies, they sat in their seats straight and leaned forward. Now they slump down, with their heads back, and eat candy and popcorn. I want them to sit up straight again."[5] 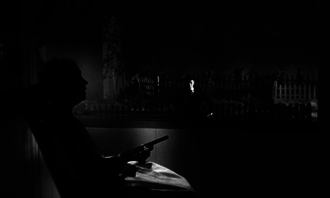 A lighting arrangement in The Night of the Hunter. Note the placement of the key light off the subject, (Lillian Gish), to create a silhouette while illuminating Robert Mitchum in the background. This plays off the conventional association of light with good and darkness with evil.

Principal photography of The Night of the Hunter began in August 15 and ended in October 7, 1954. Mitchum originally suggested Laughton to shoot the film in authentic Appalachian locations but the director couldn't afford the budget to do on-location shooting. Besides, he wanted to create the film's unique look on Hollywood sound stages and found what he was looking for at Pathe, Republic studios and the Rowland V. Lee ranch in the San Fernando Valley.

The film's score, composed and arranged by Walter Schumann in close association with Laughton, features a combination of nostalgic and expressionistic orchestral passages. The film has two original songs by Schumann, "Lullaby" (sung by Kitty White, whom Schumann discovered in a nightclub) and "Pretty Fly" (originally sung by Sally Jane Bruce as Pearl, but later dubbed by an actress named Betty Benson). A recurring musical device involves the preacher making his presence known by singing the traditional hymn "Leaning on the Everlasting Arms." Mitchum also recorded the soundtrack version of the hymn.

In 1974, film archivists Robert Gitt and Anthony Slide retrieved several boxes of photographs, sketches, memos, and letters relating to the film from Laughton's widow Elsa Lanchester for the American Film Institute. Lanchester also gave the Institute over 80,000 feet of rushes and outtakes from the filming.[6] In 1981, this material was sent to the UCLA Film and Television Archive where, for the next 20 years, they were edited into a two-and-half hour documentary that premiered in 2002, at UCLA's Festival of Preservation.[7]

The Night of the Hunter was not a success with either audiences or critics at its initial release, and Laughton never directed another film.[1] Nevertheless, the film has found a wider audience over the years, and Mitchum's performance, in particular, has been praised.

The film was shot in black and white in the styles and motifs of German Expressionism (bizarre shadows, stylized dialogue, distorted perspectives, surrealistic sets, odd camera angles) to create a simplified and disturbing mood that reflects the sinister character of Powell, the nightmarish fears of the children, and the sweetness of their savior Rachel. Due to the film's visual style and themes, it is also often categorized as a film noir.

Roger Ebert wrote, "It is one of the most frightening of movies, with one of the most unforgettable of villains, and on both of those scores it holds up ... well after four decades."[8]

In 2008, it was ranked as the 71st greatest movie of all time by Empire magazine in its issue of The 500 Greatest Movies of All Time.[10]

In 1992, the United States Library of Congress deemed The Night of the Hunter to be "culturally, historically, or aesthetically significant" and selected the film for preservation in its National Film Registry.

In the 1997 documentary series Dope Sheet, John Kricfalusi, creator of The Ren & Stimpy Show, considers The Night of the Hunter as his all-time favourite film; he has praised for its direction, art direction, and acting.

The film was remade in 1991 as a TV movie starring Richard Chamberlain.[11]