The Pharcyde (/ˈfɑːrsaɪd/) is an American alternative hip hop group, formed in 1989, from South Central Los Angeles. The original four members of the group are Imani (Emandu Wilcox), Slimkid3 (Trevant Hardson), Bootie Brown (Romye Robinson), and Fatlip (Derrick Stewart).[1] DJ Mark Luv was the group's first disc jockey (DJ), followed by producer J-Swift and then J Dilla. The group is perhaps best known for the hit singles "Drop", "Passin' Me By" and "Runnin'", as well as their first album, Bizarre Ride II the Pharcyde (1992). The group continues to tour and record, both collaboratively and in solo projects—the most recent being Hardson's collaborative EP with the award-winning DJ Nu-Mark (of Jurassic 5) released in 2014 on Delicious Vinyl.[2]

Pharcyde group members Slimkid3, Bootie Brown, and Imani met as dancers in the late 1980s and dancing was their main ambition as late as 1990.[1] Around this time, Imani and Slimkid3 were in a group called "As Is" and later a group called the "Play Brothers",[1] whilst Bootie Brown was a backup dancer for Fatlip[1] (Fatlip being the last member to join the group[3]). Bootie Brown recalls that their earlier dancing careers influenced their rapping – "sometimes the way I rap is almost like the way I used to dance".[4] The group met Reggie Andrews, a local high-school music teacher who worked with the Dazz Band and Rick James, and who was a major musical influence on their debut album.[3][5] The group also met producer J-Swift around this time, as he was Reggie Andrews's "star pupil" according to the book Check the Technique.[6]

The Pharcyde recorded their first demo in 1991, which contained the songs "Passin' Me By", "Ya Mama", and "Officer",[7] and hired a manager, Paul Stewart, who had worked for Cypress Hill, De La Soul, and House of Pain.[7] Mike Ross of Delicious Vinyl heard the demo and the group was signed to the label in the summer of 1991[7] – they were first featured on Brand New Heavies's album Heavy Rhyme Experience, Vol. 1, on the song "Soul Flower", released by Delicious Vinyl in 1992.[7]

The group, along with producer J-Swift, recorded their first album Bizarre Ride II the Pharcyde, which was released in September 1992.[8] The album was certified Gold by the RIAA in 1996.[9] The album was highly acclaimed, and became one of the most praised and influential alternative hip hop albums of the 1990s.[10][11]

Their second single "Passin' Me By" became a minor Billboard hit, peaking at No. 52 on the Hot 100. The song was later featured in the hit movie Big Daddy and was also a crossover modern rock hit.[12] The song is now usually considered a golden-era staple and is the group's most well known song. The album featured a couple of guest MCs, including Bucwheed (known then as Buckwheat, formerly of the alternative hip-hop group The Wascals) on the tracks "On The DL" and "I'm That Type of Nigga".[13]

Problems between the group and producer J-Swift began during the recording of the debut, with infighting and "personality conflicts".[9] J-Swift started a crack habit,[14] from which he is still trying to recover. A documentary, 1 More Hit (2007), recorded his attempts to recover from his addiction and to regain his music career.[15][16]

After the Bizarre Ride album was released, the group began touring with A Tribe Called Quest and De La Soul, culminating with an appearance at the Lollapalooza show in 1994.[5]

In 1994, Pharcyde appeared on the Red Hot Organization's compilation album, Stolen Moments: Red Hot + Cool. The album, meant to raise awareness and funds in support of the AIDS epidemic in relation to the African American community, was heralded as "Album of the Year" by Time Magazine.

In 1995, The Pharcyde released their second album, Labcabincalifornia. The album received mixed reviews, maybe due to a different musical direction from the light-hearted playfulness of their debut. The album included another big crossover hit, "Runnin'", peaking at No. 55 on the Billboard Hot 100. This single was later featured in the movie 8 Mile, as well as the More Music from 8 Mile soundtrack. Labcabincalifornia featured production from producers Jay Dee (who handled the majority of the production) and Diamond D. This album generated lower sales, not reaching gold status. A music video for the song "Drop" was directed by Spike Jonze.

Problems grew between Fatlip and the other MCs after this album, resulting in his leaving the group. In the documentary Cydeways: The Best of the Pharcyde, while the group is performing in shows they still offer their support to Fatlip, telling the crowd that if they support Fatlip on his solo career then they support The Pharcyde and vice versa.

The group was largely missing from the hip hop scene between 1997 and 1999. The three remaining members returned in 2000 with an EP titled Chapter One: Testing the Waters.

The group released a full studio album later in 2000 titled Plain Rap. The album had a lukewarm reception both critically and commercially.

Soon after the release, member Slimkid3, now going by his birth name of Tre Hardson, left the group to pursue a solo career. In 2002, he released his first solo album titled Liberation.

In the music video for the song "Trust" (featured on Plain Rap), the rest of the group's disdain for Fatlip's departure is evident as he is portrayed as a sad-faced clown, being constantly attacked in the video. Tre Hardson's animated self is shown to transform into a phoenix that flies away at the end of his verse, which can be interpreted as more of an acceptance of his departure from the remaining two members.

The album was released on the group's own independent record label, Chapter One Entertainment. 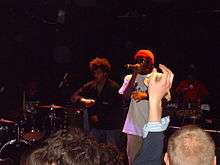 The Pharcyde performing at The Village club in Dublin on March 17, 2006

Though Humboldt Beginnings is to date the last Pharcyde album, its members have since been keeping busy with various contributions and projects. A compilation of The Pharcyde was released in 2005, titled Sold My Soul: The Remix & Rarity Collection, featuring a number of remixes and rare songs. Former member Fatlip released his solo debut in 2005, titled The Loneliest Punk, and Tre Hardson's second full-length solo album SLIMKID3's Cafe was released on April 4, 2006.

In late 2007, Tre toured with L.A. Latin-funk-hip hop band Ozomatli on their Winter Tour throughout the United States.

In 2005, Bootie Brown made a guest appearance on Gorillaz' single "Dirty Harry", from the album Demon Days. The verse was a narrative of a soldier on the frontlines in Iraq. He often filled in for rapper Mos Def on the Gorillaz' song "Stylo" on the group's Escape to Plastic Beach World Tour and at the Glastonbury Festival in 2010.

On April 22, 2008 it was announced that The Pharcyde would be reuniting for the annual Rock the Bells Festival Series. The first performance was Saturday, July 19 in Chicago.[19]

Remixes of The Pharcyde's "Runnin" and "Passin' Me By" appear on Delicious Vinyl's 2008 release, Rmxxology.

The Pharcyde toured Australia in February 2009 as part of the Good Vibrations Festival, which was headlined by Fatboy Slim, and played in Sydney, Melbourne, Gold Coast and Perth. They also headlined at the All Points West Festival in Liberty State Park, NJ on July 31, 2009.

The Pharcyde also reunited at Rhymesayers Entertainment's soundset, Memorial Day Weekend, 2009, and were the co-headliners of the festival, which was also headlined by Atmosphere and featured many other underground artists.

Uncle Imani went on FIVE10 Radio[20] to talk about the story behind the growth and demise of The Pharcyde.

The downfall of Pharcyde was named the 26th (out of 30) worst fall-offs in hip hop history by Complex magazine in December 2012.[21]

2012 saw the twentieth anniversary of The Pharcyde's debut Bizarre Ride II The Pharcyde, and to mark the event Fatlip and SlimKid3 teamed up with the album's producers J-Sw!ft and L.A. Jay, as well as record label Delicious Vinyl, to play the album in its entirety at a tribute show at The Roxy Theatre in Los Angeles.[22] The performance was intended to be a one-off, but due to an overwhelming success and reception,[23] the group began touring the show 'Bizarre Ride Live', and, along with MC K-Natural, working on original music under the moniker The Bizarre Ride.