The Saint is an ITC mystery spy thriller television series that aired in the UK on ITV between 1962 and 1969. It was based on the literary character Simon Templar created by Leslie Charteris in the 1920s[2] and featured in many novels over the years.[2] He was played by Roger Moore. Simon Templar was essentially a Robin Hood who stole from criminals, but kept the money. His nemesis was Chief Inspector Claude Teal who considered Templar a common criminal no matter whom he stole from (shades of Les Miserables). [2][3][4]

As a result of the strong performance in the US of the first two black-and-white series in first-run syndication, NBC picked up the show as a summer replacement in its evening schedule in 1966. The programme therefore ended its run with both trans-Atlantic prime time scheduling and colour episodes. It also proved popular beyond the UK and US, eventually airing in over 60 countries, and made a profit in excess of £350m for ITC.[5][6][7] With almost 120 episodes, the programme is exceeded only by The Avengers as the most productive show of its genre produced in the UK. As with The Avengers, the colour episodes were originally broadcast in the UK in black and white, predating the advent of colour transmissions on ITV.

Roger Moore had earlier tried to buy the production rights to the Saint books himself and was delighted to be able to play the part. Moore eventually became co-owner of the show with Robert S. Baker when the show moved to colour and the production credit became Bamore Productions. Most of the wardrobe Moore wore in the series was his own.

He was reportedly offered the role of 007 at least twice during the run of the series, but had to turn it down both times owing to his television commitments. In one early episode of the series (titled 'Luella'), another character actually mistakes Templar for Bond.

Moore had a few recurring co-stars, especially Ivor Dean, who played Templar's nemesis, Inspector Teal. In three early episodes, Teal had been played by Campbell Singer, Norman Pitt and Wensley Pithey; Dean featured from the episode "Iris" (7 November 1963) onward. Teal's relationship with Templar was broadly similar to that depicted in the novels, however in the series he is often depicted as bungling, rather than merely Charteris's characterization of him as an officious, unimaginative policeman. When in France, Templar had a similar relationship with Colonel Latignant (Arnold Diamond). Latignant is depicted as being even less competent than Teal, and is even keener than Teal to find Templar guilty - even though Templar repeatedly helps him solve the case. Unlike Teal, Latignant did not appear in Charteris's novels. In all, Inspector Teal featured in 26 episodes and Colonel Latignant in six.

The Saint began as a straightforward mystery series, but over the years adopted more secret agent- and fantasy-style plots. It also made a well-publicized switch from black-and-white to colour production midway through its run. The early episodes are distinguished by Moore breaking the fourth wall and speaking to the audience in character at the start of every episode. With the switch to color, this was replaced by simple narration. Invariably, the pre-credits sequence ended with someone referring to (and/or addressing) the Saint by name - "Simon Templar"; at this point, an animated halo appeared above Templar's head as the Saint looked at the camera (or directly at the halo). Some episodes such as "Iris" broke away from this formula and had Templar address the audience for the entire pre-credits sequence, setting up the story that followed.

Many episodes were based upon Charteris's stories, although a higher percentage of original scripts were used as the series progressed ("Queen's Ransom" was both the first color episode and the first episode not to be based on a Charteris work). The novel Vendetta for the Saint, credited to Charteris but written by Harry Harrison, was one of the last Saint stories to be adapted. Some of the later scripts were novelised and published as part of the ongoing series of The Saint novels, such as The Fiction Makers and The People Importers. The first of these books, which gave cover credit to Charteris, but were actually written by others, was The Saint on TV, and the series of novelizations continued for several years after the television program had ended. 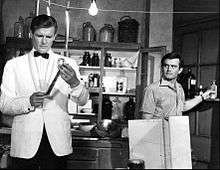 Moore as Simon Templar in "Interlude in Venice," 1966

Unlike its contemporary rival, The Avengers, The Saint was shot entirely on film from the beginning, whereas the first three series of the other series (broadcast between 1961 and 1964) were videotaped, with minimal location shooting. All episodes of The Saint were syndicated abroad.

The black-and-white series were first syndicated in the US by NBC affiliate stations in 1967 and 1968, and 32 of the 47 colour episodes were broadcast by NBC from 1968 to 1969, and has since played in syndication in the US for many years after (the '70s sequel Return of the Saint aired to high ratings on CBS in 1979-80). Most series are available on DVD in North America. A pair of two-part episodes from series 6, "Vendetta for the Saint" and "The Fiction Makers", were made into feature films and distributed to theatres in Europe, and often show up on late-night television in America. They are also available on DVD.

In 1978, the series was revived as Return of the Saint, starring Ian Ogilvy as Templar. There were two further attempts to revive the Saint on TV; in 1987, a 46-minute US TV pilot was made "The Saint in Manhattan" starring Australian actor Andrew Clarke, and in 1989, London Weekend Television in the UK made a series of six film-length episodes starring Simon Dutton. Roger Moore never played the role again after 1969, though he can be heard speaking on a car radio during the 1997 film The Saint, starring Val Kilmer as Templar. The final film bore absolutely no similarity to the books or either TV series (and indeed carried no credit for Leslie Charteris). With that in mind, it was strange that the producers bought the rights to use the character's name from Robert S. Baker, who held the rights and had developed and produced both The Saint and Return of the Saint.

In the UK, ITV4 has broadcast colour episodes. In the US, FamilyNet and RTV have airied both the black-and-white and colour episodes. Me-TV has also broadcast the series. In March 2015 the CBS-owned Decades digital cable network aired a "Series Binge" marathon of the show as part of "Countdown to Decades", a soft-launch prelude to the network's official launch in May 2015. The marathon featured every episode of the series aired back to back. The marathon began March 30 at 5 pm Eastern Time and ended April 3 at 11pm.

In the TV series, the Saint lives in London, though the exact address is never revealed, and he is seen travelling to locations across London, the UK and around the world. The whole series was shot at Associated British Elstree Studios in Hertfordshire, with very few scenes shot on location elsewhere. This was achieved by making extensive use of the sets at Elstree, early blue screen technology to simulate different locations in the background, painted or projected backdrops, as well as revolving painted backdrops for moving scenes. There are a few exceptions, such as the extensive location shoot on the island of Malta for "Vendetta for the Saint". Look-alikes were used for location shoots where the Saint is seen in the distance entering a well-known building or driving past the camera at speed.[8]

The Saint and its books have a fan club created originally by Leslie Charteris for the fans of the series. The club falls under the control of honorary chairmen Roger Moore and Ian Ogilvy. The club marks events such as the publication of books or other information on the series.

"The Fiction Makers" from Series 5 was edited into a two-parter using the revamped theme for inclusion in series 6, as was "Vendetta for the Saint". However, during transmission of series 5, transmission of the episodes caught up with production, meaning repeats of some of the black-and-white episodes had to be slotted into the schedule to slow the broadcast of new episodes (this had little impact on viewers as the colour episodes were being broadcast in black and white anyway). This series started transmission halfway through production, leading to only 26 of the episodes being screened. The three unscreened episodes plus "The House on Dragon's Rock", which in some regions was not broadcast because it was thought unsuitable for children, were then mixed in with series 6 for transmission.

A&E Home Video released The Saint on DVD in Region 1. They have released two sets of monochrome episodes, the first with three discs, the second with four. Each disc contains four episodes, meaning only 28 of the monochrome episodes are available. All of the colour episodes have been released in seven two-disc sets, as well as in one 14-disc "Megaset." The two-part episodes are only in movie form. These are currently out of print.

In Region 2, Network DVD has released two multi-disc sets, with all the monochrome episodes available in an 18-disc set, and all the colour ones in a 14-disc set. The colour set includes the theatrical versions of the two double-length stories, as well as the original 48-minute two-part versions. Also included are a 40-minute documentary and isolated music tracks. Prior to this, Carlton Video had released four separate discs, the first one with the first two episodes, and the rest with four episodes each. There is also a 10-disc set that repackages the previous four discs alongside six more, containing the first 39 monochrome episodes. The Monochrome and Colour sets are the best out there, in terms of picture, audio quality and special features. In France, TF1 Vidéo has released 5 multi-disc sets, containing all the 118 episodes, in French and in English.

In Region 4, Umbrella Entertainment released the entire series in Australia, in five boxed sets of six discs each. These are in PAL format, but with no region code. The boxsets feature numerous extras including a series of audio commentaries recorded in 2004 with surviving members of the cast and crew, ranging from guest stars through to Roger Moore.

In September 2009, it was announced that The Saint is to be remade for television by Vancouver-based studio Brightlight Pictures. Scottish actor Dougray Scott was lined up to play Simon Templar.[12] However, no series eventuated.

It was later reported James Purefoy would play The Saint in a remake, production of which was scheduled to begin in July 2011.[13] This failed to materialize.

In December 2012, it was announced that Roger Moore would produce the series, which would star Adam Rayner as Simon Templar and Eliza Dushku as his girlfriend,[14] Patricia Holm.[15] In a promo that was later released, it was also shown that Moore would star in the new series, as would his successor in Return of the Saint, Ian Ogilvy. Production of a pilot episode was completed by early 2013; as of summer 2014 it awaits a broadcast time in the US. Rayner has since committed to other series work and there are rumors of a further attempt to develop the material for TV by the same producers.[16]