The Scarborough Hospital (TSH) is a hospital network based in Scarborough, Toronto, Ontario, Canada. It operates two campuses, the General Campus and the Birchmount Campus (previously Grace Campus).

The Scarborough Hospital, located in east Toronto, Ontario, is a community hospital situated in one of the most ethnically diverse communities in the world.[1] It is affiliated with the University of Toronto Faculty of Medicine.[2] The hospital comprises two campuses, the General campus and the Birchmount campus, as well as six community satellite sites.

The hospital’s historic affiliation with The Salvation Army ended in October 2008 when The Army made a decision to cease its role in the administration of the hospital and refocus its efforts on providing culturally sensitive spiritual care.[5] As part of the agreement with The Salvation Army, the hospital undertook a process to change the name of the Grace campus. Staff and members of the public were given the opportunity to enter a contest to suggest a new name for the campus. The new name, “Birchmount campus”, was officially announced in early July 2009.[6] 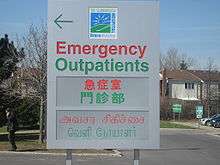 Trilingual board of emergency and outpatient services - In English, Chinese, and Tamil

In addition to providing a range of community-based healthcare services, The Scarborough Hospital is a regional centre of excellence for dialysis, family maternity services, vascular surgery, pacemakers, sexual assault care, and mental health and crisis programs.[7] The dialysis program is the largest of its kind in North America.[8]

The Scarborough Hospital placed a renewed emphasis on transparency and accountability. Their corporate website, www.tsh.to, publishes a number of patient safety indicators including rates of hospital-acquired infections such as C. difficile, MRSA and VRE, as well as their Hospital Standardized Mortality Ratio (HSMR), hand hygiene compliance and a corporate balanced scorecard.

Demonstrating accountability has gone hand-in-hand with an increased focus on patient safety. In April 2009, The Scarborough Hospital ranked first in Ontario for its hand hygiene compliance among healthcare workers, with an overall rate of 97%. The hospital has also been successful at reducing rates of C. difficile and HSMR.[9]

2009 marked a significant growth milestone for the General campus, when it opened a $72 million Emergency and Critical Care Centre in its new West Wing. The project, which more than doubled the size of the previous Emergency department, features new infection control and isolation protocols as well as five care zones that are designed to provide the appropriate level of care for specific patients’ acuities—Pediatric, Rapid Assessment, Critical Care, Acute Care and Ambulatory Care. The new wing is also home to a 22-bed Critical Care Centre that consolidates patients from the previous Intensive Care Unit, Coronary Care Unit and Acute Medical Unit. A Satellite Diagnostic Imaging department also opened in the West Wing, with the Greater Toronto Area’s first Siemens YSIO DR-X-ray units that result in faster images and a more comfortable experience for both patients and technologists. The hospital is also the first in the world to run two key diagnostic imaging systems (Agfa HealthCare’s IMPAX 6.3.1 and Cardiovascular 7.7,) on an integrated platform—a major benefit for cardiac patients who can now get faster, more accurate diagnoses and treatment.[10]

On December 21, 2010, the Birchmount campus was approved for a Magnetic Resonance Imaging (MRI) machine by the Hon. Gerry Phillips, MPP for Scarborough-Agincourt.[11]

In late March 2015 hospital surgeons performed surgery on Sadiki, a gorilla with a foot issue from the Toronto Zoo along with the veterinary staff from the zoo's Wildlife Health Centre.[12]