The Year of Living Dangerously (film)

The Year of Living Dangerously is a 1982 Australian romantic war drama film directed by Peter Weir and co-written by Weir and David Williamson adapted from Christopher Koch's 1978 novel of the same name. The story is about a love affair set in Indonesia during the overthrow of President Sukarno. It follows a group of foreign correspondents in Jakarta on the eve of an attempted coup by the 30 September Movement in 1965.

The film stars Mel Gibson as an Australian journalist, and Sigourney Weaver as a British Embassy officer. It also stars Linda Hunt as the male dwarf Billy Kwan, Hamilton's local photographer contact, a role for which Hunt won the 1983 Academy Award for Best Supporting Actress.[6] The film was shot in both Australia and the Philippines and includes Australian actors Bill Kerr as Colonel Henderson and Noel Ferrier as Wally O'Sullivan.

It was banned from being shown in Indonesia until 1999, after the forced resignation of coup-leader and political successor Suharto in 1998.[7] The title The Year of Living Dangerously is a quote which refers to a famous Italian phrase used by Sukarno; vivere pericolosamente, meaning "living dangerously". Sukarno borrowed the line for the title of his Indonesian Independence Day speech of 1964.

Guy Hamilton (Mel Gibson), a neophyte foreign correspondent for an Australian network, arrives in Jakarta on assignment. He meets the close-knit members of the foreign correspondent community including journalists from the United Kingdom, the United States, and New Zealand, diplomatic personnel, and a Chinese-Australian dwarf of high intelligence and moral seriousness, Billy Kwan (Linda Hunt). Hamilton is initially unsuccessful because his predecessor, tired of life in Indonesia, had departed without introducing Hamilton to his contacts. He receives limited sympathy from the journalist community, which competes for scraps of information from Sukarno's (Mike Emperio) government, the Communist Party of Indonesia (PKI), and the conservative Muslim military. However, Kwan takes a liking to Hamilton and arranges interviews for him with key political figures.

Kwan introduces Hamilton to Jill Bryant (Sigourney Weaver), a beautiful young assistant at the British embassy. Kwan and Bryant are close friends, and he subtly manipulates her encounters with Hamilton. After resisting Hamilton because she's returning to the United Kingdom, Bryant falls in love with him. Discovering that the Communist Chinese are arming the PKI, Bryant passes this information to Hamilton to save his life, but he wants to cover the Communist rebellion that will occur when the arms shipment reaches Jakarta. Shocked, Kwan and Bryant withdraw their friendship from Hamilton, and he is left with the American journalist Pete Curtis (Michael Murphy), and his own assistant and driver Kumar (Bembol Roco), who is secretly PKI. Kumar, however, remains loyal to Hamilton and tries to open his eyes to all that is going on.

Kwan, outraged by Sukarno's failure to meet the needs of most Indonesians, decides to hang a sign saying "Sukarno feed your people" from the Hotel Indonesia expressing his outrage but is thrown from the window by security men, and dies in Hamilton's arms. His death is also witnessed by Jill. Still in search of "the big story", Hamilton visits the Presidential palace after the army generals have taken over and unleashed executions, after they learned of the Communist shipment. Struck down by an Army officer, Hamilton suffers a detached retina.

Resting alone in Kwan's bungalow, Hamilton recalls a passage from the Bhagavad Gita ("all is clouded by desire") which Billy told him. Kumar visits him and tells him about the failed coup attempt. Risking permanent damage to his eye, a heavily bandaged Hamilton implores Kumar to drive him to the airport, where he boards the last plane out of Jakarta and is reunited with Bryant.

A number of filmmakers were interested in buying the rights to Christopher Koch's novel including Phillip Noyce. It was Peter Weir who was successful. Koch wrote an early draft but Weir was unhappy with it. Alan Sharp wrote three more drafts, then David Williamson was brought on to do several more drafts. Koch later came back on to work on some of the voice over, although he never spoke with Peter Weir. Koch later claimed that the final script was "55% Williamson/Weir, and 45% Koch".[8]

The film was originally backed by the South Australian Film Corporation and the Australian Film Commission, with international distribution arranged by MGM/UA Entertainment Company. However, the SAFC then dropped out and Weir's agent suggested MGM provide the entire $6 million budget themselves, which is what happened.[2][9] It was by far the most ambitious Australian film undertaken at the time and was one of the first co-productions between Australia and a Hollywood studio. 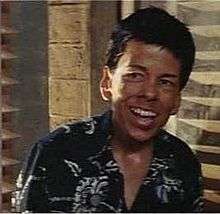 Dancer David Atkins was originally cast as Billy Kwan. However, during rehearsals Weir began to feel that the relationship between his character and Mel Gibson's was not working so he decided to recast. Several actors auditioned, including Bob Balaban and Wallace Shawn, when Weir saw a photo of Linda Hunt. He asked for her to audition and decided to cast her.[2] To accomplish the role during production, Hunt shortened "her hair and dye[d] it black[,] wore padding around her waist, shaved her eyebrows, and carried something in her shirt pocket."[10] In her 1986 interview with Bomb magazine, Hunt remarked that Billy Kwan "is supra-personal [with] layers of sexual ambiguity[.]"[11]

Although originally set to be filmed in Jakarta, permission to film in Indonesia was denied, so the bulk of the film was shot in the Philippines. Death threats against Weir and Gibson from Muslims who believed the film would be anti-Islam forced the production to move to Australia. Gibson downplayed the death threats, saying, "It wasn't really that bad. We got a lot of death threats to be sure, but I just assumed that when there are so many, it must mean nothing is really going to happen. I mean, if they meant to kill us, why send a note?"[12][13]

Gibson described his character Guy, saying, “He's not a silver-tongued devil. He's kind of immature and he has some rough edges and I guess you could say the same for me.”[14]

"L'Enfant", a track from Vangelis' 1979 album Opera sauvage, was featured in the film.

The Year of Living Dangerously was entered into the 1983 Cannes Film Festival[15] where it was well received by audiences and critics.[16]

On review aggregator website Rotten Tomatoes, the film has an 89% rating based on 27 reviews, with an average rating of 7.7/10. The site's consensus states: "Both a smart, suspenseful tale of intrigue and a sweeping romance, The Year of Living Dangerously features excellent performances from Mel Gibson and Sigourney Weaver as a pair of journalists covering political unrest in Indonesia."[19] Metacritic reports a 65 out of 100 rating based on 9 critics, indicating "generally favorable reviews".[20] Film critic Roger Ebert of the Chicago Sun-Times gave the film four out of four stars and praised Hunt's performance: "Billy Kwan is played, astonishingly, by a woman—Linda Hunt, a New York stage actress who enters the role so fully that it never occurs to us that she is not a man. This is what great acting is, a magical transformation of one person into another".[21] In his review for The New York Times, Vincent Canby praised Gibson's performance: "If this film doesn't make an international star of Mr. Gibson (Gallipoli, The Road Warrior), then nothing will. He possesses both the necessary talent and the screen presence".[22]

However, Time magazine's Richard Corliss wrote, "But in his attempt to blend his preoccupations with the plot of C. J. Koch's 1978 novel, Weir has perhaps packed too much imagery and information into his movie ... The plot becomes landlocked in true-life implausibilities; the characters rarely get a hold on the moviegoer's heart or lapels".[23] In his review for the Washington Post, Gary Arnold described the film as "a grievously flawed yet compelling tale of political intrigue, certainly a triumph of atmosphere if not of coherent dramatization".[24] Newsweek magazine called the film "an annoying failure because it fritters away so many rich opportunities".[25]

For their work in the film, Weir was nominated for the Palme d'Or at the 1983 Cannes Film Festival and Hunt won the Academy Award for Best Supporting Actress.[3]