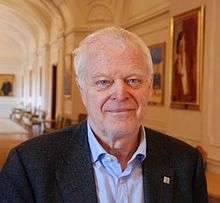 He held the post of Council of Europe Commissioner for Human Rights in Strasbourg from 1 April 2006 to 31 March 2012. He succeeded the first Commissioner, Álvaro Gil-Robles.

Between 2001-03, Hammarberg acted as Regional Adviser for Europe, Central Asia and the Caucasus for the UN High Commissioner for Human Rights. For several years, he was the Swedish Prime Minister's Personal Representative for the UN Special Session on Children, as well as the Convener of the Aspen Institute Roundtables on "Human Rights in Peace Missions". Between 1996 and 2000, he was the appointed representative of the UN Secretary General, Kofi Annan, for human rights in Cambodia. He also participated in the work of the Refugee Working Group of the multilateral Middle East Peace Process.

As Commissioner, Hammarberg regularly conducted visits to promote the respect of human rights in all Council of Europe member states, in accordance with his mandate.[1]

Upon stepping down as Commissioner, he joined the NGO Mental Disability Advocacy Center as its Honorary President. [2]

Thomas Hammarberg is dedicated to strengthening Sinto and Roma rights[3] in Europe, which he believes are “shamefully flawed”. In a number of speeches and statements, Hammarberg actively seeks to improve living conditions for the largest minority in Europe and criticises the alarming levels of racism directed at these people. Hammarberg paints a clear picture of the situation; for example, in his latest report on Italy he heavily criticises the Italian authorities over their treatment of Sinti and Roma people.

In 2010, Hammarberg published a comprehensive position paper on the human rights situation of Sinti and Roma, in which he stressed the need for a unified and comprehensive programme aimed at improving the situation, warning that “today's rhetoric against the Roma is alarmingly similar to that used by the Nazis before the mass killings started”.

On 27 February 2012, he published a comprehensive report on the situation of Roma and travellers in Europe,[4] stressing that in many European countries they are still denied basic human rights and suffer blatant racism.

In a published letter to the German Chancellor Angela Merkel dating back to 2009, Hammarberg calls for a halt on deportations to Kosovo in particular, saying that those deported there are exposed to political persecution and are forced to live in camps. He repeated this “urgent recommendation” one year later in a letter to the then German Federal Minister of the Interior, Thomas de Mazière. A special committee organised by Hammarberg described a Roma camp in Kosovo as “a humanitarian catastrophe”. The Human Rights Commissioner also heavily criticised France’s mass deportation of Roma in 2010.

For his resilience and passion in the question of Roma rights, Thomas Hammarberg has been honoured by the Documentation and Cultural Centre and the Central Council of German Sinti and Roma and the Manfred Lautenschlaeger Foundation with the European Civil Rights Prize of the Sinti and Roma in Berlin on 3 April 2012.